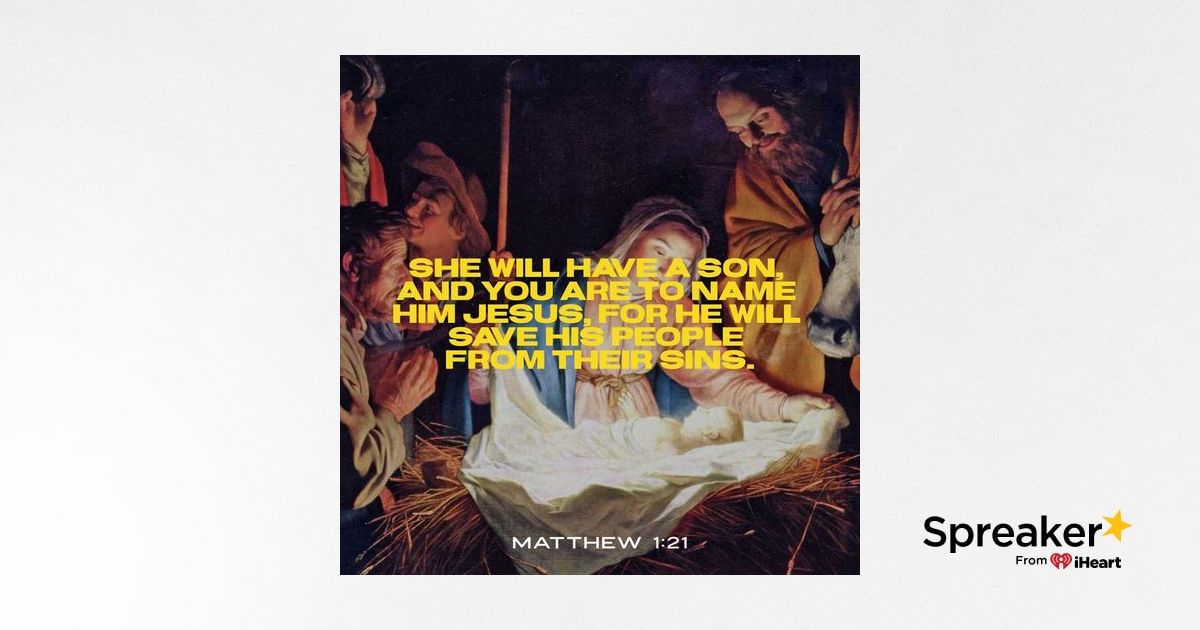 Christmas is the celebration of the Savior, Jesus Christ. To remember the birth of Jesus Christ, for us who believe He is the Son of God.

It’s when we as Christians celebrate God’s love for the world through the birth of the Christ child: Jesus. The Bible tells of his birth hundreds of years before, fulfilling prophecies.

The Christmas Story in the Bible

IN THE beginning, before all time was the Word (Christ), and the Word was with God, and the Word was God Himself. [Isa. 9:6.] He was
…
See More
present originally with God. All things were made and came into existence through Him; and without Him was not even one thing made that has come into being. In Him was Life, and the Life was the Light of men. And the Light shines on in the darkness, for the darkness has never overpowered it [put it out or absorbed it or appropriated it, and is unreceptive to it].”
‭‭John‬ ‭1:1-5‬ ‬

And the Word (Christ) became flesh, lived awhile among us; and we actually saw His glory such glory as an only begotten son receives from his father, full of grace (favor, loving-kindness) and truth. [Isa. 40:5.]

At the Right time God sent His Son into the world

Now in the sixth month the angel Gabriel was sent by God to a city of Galilee named Nazareth, to a virgin betrothed to a man whose name was Joseph, of the house of David. The virgin’s name was Mary. And having come in, the angel said to her, “Rejoice, highly favored one, the Lord is with you; blessed are you among women! Luke ‭1:26-28‬

But when she saw him, she was troubled at his saying, and considered what manner of greeting this was.

Then the angel said to her, “Do not be afraid, Mary, for you have found favor with God. And behold, you will conceive in your womb and bring forth a Son, and shall call His name JESUS. He will be great, and will be called the Son of the Highest; and the Lord God will give Him the throne of His father David. And He will reign over the house of Jacob forever, and of His kingdom there will be no end.””

Then Mary said to the angel, “How can this be, since I do not know a man?””

And the angel answered and said to her, “ The Holy Spirit will come upon you, and the power of the Highest will overshadow you; therefore, also, that Holy One who is to be born will be called the Son of God.”

“For with God nothing will be impossible.”

Then Mary said, “Behold the maidservant of the Lord! Let it be to me according to your word.” And the angel departed from her. Luke ‭1:37-38‬

When the proper time had fully come, God sent His Son, born of a woman, born subject to the Law. “God sent him to buy freedom for us who were slaves to the law, so that he could adopt us as his very own children.”

The Birth of Christ

Now the birth of Jesus Christ was as follows: After His mother Mary was betrothed to Joseph, before they came together, she was found with child of the Holy Spirit.

“Now the birth of Jesus Christ took place under these circumstances: When His mother Mary had been promised in marriage to Joseph, before they came together, she was found to be pregnant through the power of the Holy Spirit. Matthew‬ ‭1:18‬ ‬

And her promised husband Joseph, being a just and upright man and not willing to expose her publicly and to shame and disgrace

her, was minded to put her away secretly, and decided to divorce her quietly and secretly.

But as he was thinking this over, behold, an angel of the Lord appeared to him in a dream, saying, Joseph, descendant of David, do not be afraid to take Mary [as] your wife, for that which is conceived in her is of (from, out of) the Holy Spirit.”

She will bear a Son, and you shall call His name Jesus, which means Savior,for He will save His people from their sins that is, prevent them from failing and missing the true end and scope of life, which is God

All this took place that it might be fulfilled which the Lord had spoken through the prophet,”

Behold, the virgin shall become pregnant and give birth to a Son, and they shall call His name Emmanuel–which, when translated, means, God with us. Isa. 7:14, Matthew ‭1:23‬

Then Joseph, being aroused from his sleep, did as the angel of the Lord had commanded him: he took [her to his side as his wife. Matthew ‭1:24‬

And it came to pass in those days that a decree went out from Caesar Augustus that all the world should be registered. This census first took place while Quirinius was governing Syria. So all went to be registered, everyone to his own city. Luke ‭2:1-3‬

“And Joseph also went up from Galilee from the town of Nazareth to Judea, to the town of David, which is called Bethlehem, because he was of the house and family of David, To be enrolled with Mary, his espoused (married) wife, who was about to become a mother. [Matt. 1:18-25.]”

And while they were there, the time came for her delivery, And she gave birth to her Son, her Firstborn; and she wrapped Him in swaddling clothes and laid Him in a manger, because there was no room or place for them in the inn.”

“And in that vicinity there were shepherds living [out under the open sky] in the field, watching [in shifts] over their flock by night.”

“And behold, an angel of the Lord stood by them, and the glory of the Lord flashed and shone all about them, and they were terribly frightened. But the angel said to them, Do not be afraid; for behold, I bring you good news of a great joy which will come to all the people. For to you is born this day in the town of David a Savior, Who is Christ (the Messiah) the Lord! [Mic. 5:2.] And this will be a sign for you [by which you will recognize Him]: you will find [after searching] a Baby wrapped in swaddling clothes and lying in a manger. [I Sam. 2:34; II Kings 19:29; Isa. 7:14.]”

And suddenly there was with the angel a multitude of the heavenly host praising God and saying:

Glory to God in the highest, And on earth peace, goodwill toward men!

So it was, when the angels had gone away from them into heaven, that the shepherds said to one another, “Let us now go to Bethlehem and see this thing that has come to pass, which the Lord has made known to us.”

And they came with haste and found Mary and Joseph, and the Babe lying in a manger. Now when they had seen Him, they made widely known the saying which was told them concerning this Child. And all those who heard it marveled at those things which were told them by the shepherds. But Mary kept all these things and pondered them in her heart. Luke‬ ‭2:13-19‬ ‭