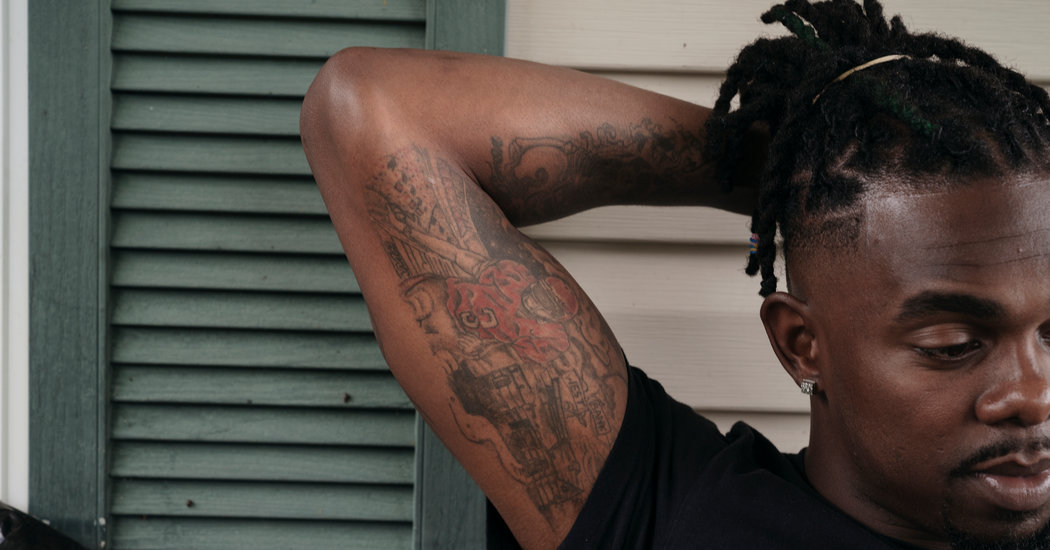 On Feb. 8, cornerback Bradley Sylve scored the first defensive touchdown in the briefly revived XFL. He intercepted a pass for the D.C. Defenders and returned it 69 yards to preserve a victory. When he reached the end zone, he bounded in joyful arrival, skipping and hopscotching and twisting in a dance called the Griddy.

The ebullient moment, shown on national television, appeared to signal Sylve’s long-sought breakthrough as a professional. It came 10 days after his 27th birthday; 15 years after Hurricane Katrina drowned his hometown in rural Louisiana in 2005; four years after he ruptured his left Achilles’ tendon at Alabama while awaiting the 2016 N.F.L. draft; and three years after fringe opportunities with the Buffalo Bills and the New Orleans Saints in 2017 produced no official playing time.

“Your blessing’s going to come,” Micquella Roblow, Sylve’s mother, told him after the game. “Stay prayed up.”

Six days later, Sylve was traded cross-country to the Los Angeles Wildcats. His luck kept getting worse as the coronavirus pandemic struck. On March 20, the XFL, which first originated and collapsed in 2001, canceled the remainder of its rebooted season as the sports world shut down. On April 13, the league filed for Chapter 11 bankruptcy protection.

Last year, Sylve played in a different spring league, the Alliance of American Football, which also folded during its first season.

“Not again,” he told himself in exasperation. “Please, not again.”

Sylve’s story is familiar among those on the margins of professional sports, the journeymen who straddle the thin line between acceptance and rejection. What makes his odyssey striking is that it has intersected with two of the most catastrophic events of the young century. His journey, which is still not complete, in his view, has required exceptional resilience and perseverance over a decade and a half through natural disaster, untimely injury and global contagion in a thwarted but unflagging pursuit of a football career.

“It’s unfortunate because I think he barely scratched the surface of his potential,” said Cyril Crutchfield, who coached Sylve to multiple state championships in football and track at South Plaquemines High School, about 50 miles southeast of New Orleans, and was married during that period to Sylve’s mother. “What’s disheartening is that all the circumstances were out of his control.” 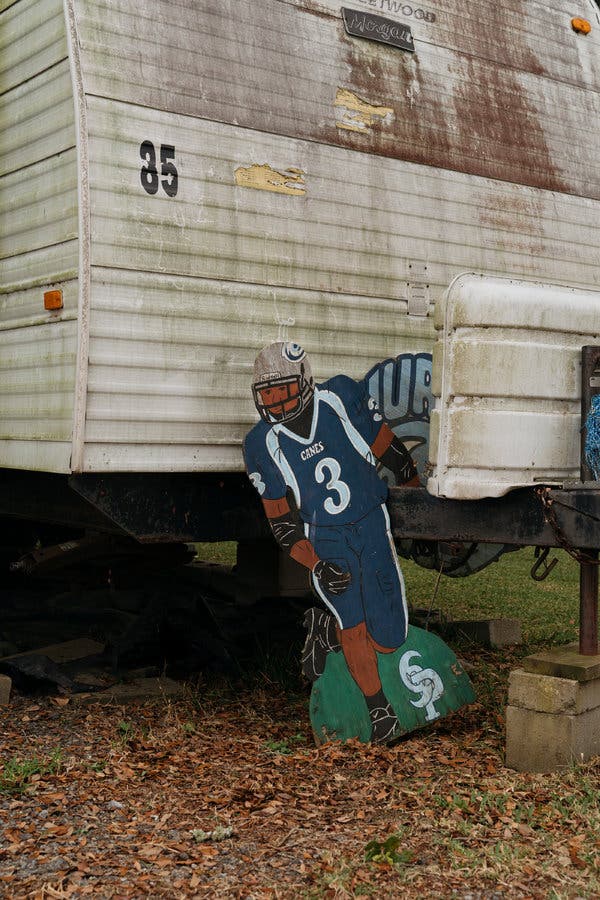 A cardboard cutout of Bradley Sylve from high school remains on his grandmother’s lawn in Port Sulphur, La.Credit…Annie Flanagan for The New York Times

Sylve grew up about as far from the big time as could be imagined, in tiny Port Sulphur, La., among the oil, fishing and citrus villages of Plaquemines Parish, where the Mississippi runs through its bird-foot delta to the Gulf of Mexico.

Highway 23 is the only road that runs the full 70 miles of the parish. It is flanked on one side by the river and on the other side by marshes and the gulf. So accustomed is the watery existence that before Katrina, the nearby village Grand Bayou had a school boat instead of a school bus.

On Aug. 29, 2005, the hurricane poured more than 20 feet of water into lower Plaquemines before submerging New Orleans. Coffins floated out of the ground. Cows hung by their necks in trees. Almost every home and business in Port Sulphur was destroyed.

Sylve, age 12 and entering seventh grade when Katrina approached, evacuated with his mother to Houston ahead of the hurricane. When they returned to check on the family’s three-bedroom home at 144 Caroline Avenue, they found it had been shoved off its foundation, pummeled, everything inside demolished. His mother and grandmother cried at their life’s accumulation, washed away.

“I had baby pictures of Bradley in two duffel bags,” Roblow, his mother, said. “Gone.”

For years after the storm, when Sylve dreamed, he found himself wandering the house. He was always a young boy and everything was intact. The kitchen. The mattress where he and his cousins played video games on the living room floor. His trophies from bantam league football, basketball and baseball. The dreams were always pleasant, and when he found himself stirring, he tried to delay waking.

ImageSylve back in Port Sulphur, La.Credit…Annie Flanagan for The New York Times

In 2006, Sylve and his mother resettled in Port Sulphur, living in a FEMA trailer, the same as everyone else. A new school, South Plaquemines High School, was formed in temporary buildings, drawing about 260 students from three destroyed parish schools. Students defiantly nicknamed themselves the Hurricanes. Sylve was in eighth grade but played football on the varsity team, already its fastest player.

The devastation of Katrina did not deflate the team with despair. It swelled the Hurricanes with tenacity and resolve. South Plaquemines won state football titles for small schools in 2007 and 2008 and reached the championship game again in 2009. Sylve played running back, wide receiver, cornerback, even quarterback. And he became one of the nation’s fastest high school sprinters.

“After Katrina, it’s been a lot easier to overcome adversity,” Sylve said. “Nothing’s worse than what we’ve been through.”

He caught the eye of Burton Burns, then the University of Alabama’s running backs coach and ace recruiter, who is from New Orleans. Burns understood and appreciated the persistence of players at South Plaquemines High School, most of them poor, all of whom lost everything in the hurricane.

For a season, Sylve’s team traveled 60 miles, round trip, to practice. Later, the Hurricanes dressed in a makeshift locker room in a ruined gym, occasionally sharing space with a stray raccoon or possum. But they ignored the inconveniences and became as dominant as any team in Louisiana, once scoring 60 points in the first quarter of a playoff game.

Sylve seemed personable, willing to do whatever his team needed, meticulous about his craft. And he was extremely fast. Burns recruited him to Alabama.

“You could almost see the confidence oozing out of that guy,” said Burns, now the running backs coach for the Giants.

At Alabama, Sylve played on national championship teams in 2012 and 2015, excelled on special teams and received a bachelor’s degree in human environmental sciences. He became the first among his closest relatives to graduate from college. But he acknowledged that his college career was left unfulfilled by injury and a mostly backup role at cornerback.

He was not invited to the combine before the 2016 N.F.L. draft. But he would have a chance to display his skills on the day league scouts visited Alabama’s campus. He had the one attribute the N.F.L. prized above almost everything else: speed.

Three times in high school, Sylve won state titles in both the 100 and 200 meters, remarkable given that South Plaquemines had no running track. He practiced on the grass of the football field and placed cones in the end zone to simulate the curve of the 200. To build strength, he and his teammates hoisted one another on their backs and ran up and down the tall, broad levee that held out the Mississippi.

“I’ve never seen a person change gears like Bradley,” said Crutchfield, who later coached several players from New Orleans who reached the N.F.L., including running back Leonard Fournette of the Jacksonville Jaguars. “With his second or third step, he seemed to be at top speed.”

ImageSylve training this month in Terrytown, La., near New Orleans. “All I need is one team to tell me yes.”Credit…Annie Flanagan for The New York Times

At Alabama, Sylve had been hand-timed at 4.28 seconds in the 40-yard dash. It was only four-hundredths of a second off the N.F.L. combine record at the time. He had filled out his 6-foot frame to 187 pounds. He was ready for the scouts to visit.

On March 8, 2016, the day before Alabama’s pro day, Sylve was practicing a routine drill, backpedaling and cutting at a 90-degree angle to his right, when he planted his left foot and heard a loud popping sound. He experienced no pain, only the sensation of something rolling up his calf like a window shade. He poked his left Achilles’ tendon.

An Alabama trainer squeezed his left calf, but the foot remained limp. Sylve had torn the Achilles’ tendon.

Alabama paid for the surgery and permitted Sylve to rehab at its training facility. Over the ensuing months, his mother posted motivational notes on his Facebook page like, “When life puts you in tough situations, don’t say, ‘Why me?’ Just say, ‘Try me.’”

A year after surgery, Sylve intrigued N.F.L. teams but never quite convinced them that his cornerback talent matched his speed. He spent the 2017 preseason with the Bills, then spent a few weeks on the Saints’ practice squad. He got a tryout with the Tennessee Titans in 2018. He then caught on with two spring leagues — the A.A.F. and the XFL — but both folded beneath his feet.

“It’s frustrating because he’s been so close, on the verge,” Burns said.

Like any player, Sylve must decide for himself when the window has closed on professional football, said Crutchfield, his high school coach. As summer approached, the two had communicated via Facebook but had not spoken since the XFL ceased operations.

ImageAbout five times a week, Sylve drives 75 miles round trip to a gym that has reopened.Credit…Annie Flanagan for The New York Times

“It’s like when somebody dies, I don’t know how to call and say I’m sorry,” said Crutchfield, now the coach at Broadmoor High School in Baton Rouge, La.

The odds may be long for Sylve. But he is not ready to concede his football career. Not after everything he has been through. Even when the pandemic struck, the XFL held out for a week longer than some other leagues, and he kept going to practice with the Los Angeles Wildcats. “I wasn’t worried about the virus,” he said. “I had been through Hurricane Katrina.”

Inevitably, the XFL closed its doors, too. Sylve has moved back to Plaquemines Parish, living with his grandmother and 6-year-old son, Bradley Jr., in the unincorporated village of West Pointe à la Hache.

He lives frugally. He said he put his truncated XFL earnings, about $25,000 of what would have been about a $50,000 salary for a full season, into savings. Five times a week, he drives 75 miles, round trip, to a gym that has reopened. At home, he fishes for redfish and speckled trout and peace of mind.

Acting as his own agent, Sylve plans to try to arrange another N.F.L. audition or training camp invitation, if and when the pandemic ebbs, though the league will not hold open tryouts this year. Or he might seek out the Canadian Football League, if it plays, or yet another spring league or indoor league. At some point, football will end, and he will consider training or coaching athletes. But not yet.

“If I don’t make the big leagues, as long as I’m out there balling, it doesn’t really matter,” Sylve said. His son is entering first grade, he said, “and I don’t want him to see me running away from problems when things get thick.”

The speeches he heard in high school about weathering misfortune still resonate: Katrina destroyed us, but look at where we are now. If you can make it through all that despair, destruction and heartbreak, nothing in this world can defeat you. If you keep plugging away, good things are going to happen.

“I just want to play football and live out my dream,” Sylve said. “All I need is one team to tell me yes.”

ImageSylve said he doesn’t want his 6-year-old son, Bradley Jr., to see him “running away from problems when things get thick.”Credit…Annie Flanagan for The New York Times

With Cahill back in her corner, Halep chases Melbourne glory