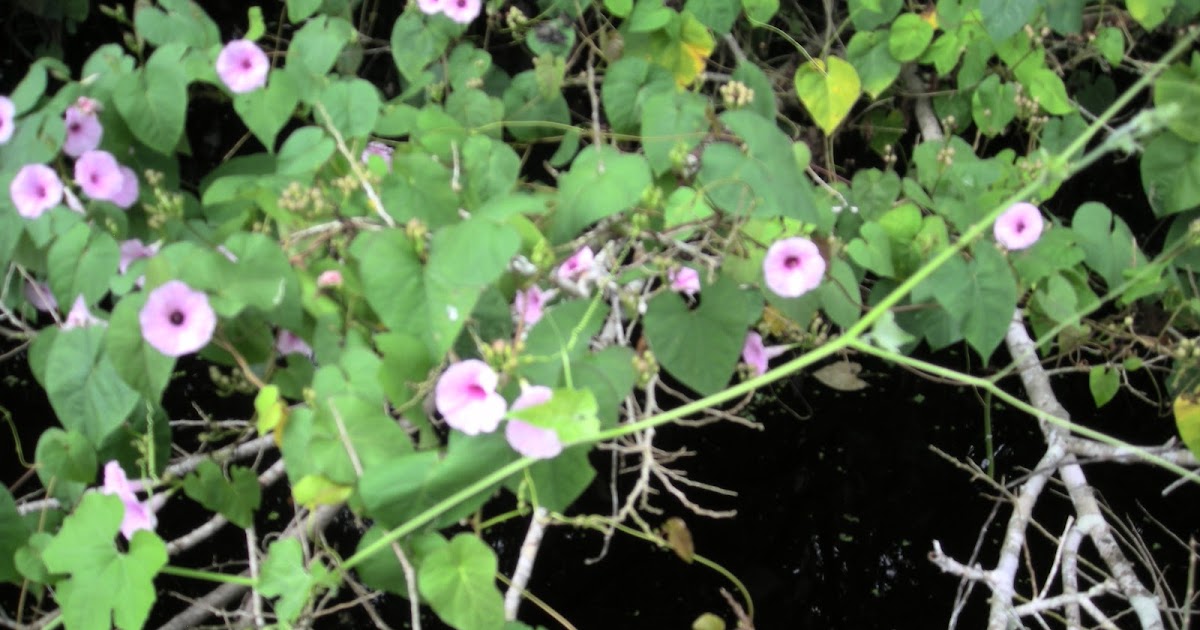 I like morning glories. Bright blue flowers that weren’t there last night–and that vanish in the early afternoon. Vines that drape over branches and walls.

Morning glories are in the genus Ipomoea (family Convolvulaceae). They are found throughout the tropics but especially in the New World. A few get north or south into temperate regions.

There are 300-500 species of Ipomoea. (Why the range? Perhaps the same one was named twice, perhaps one that is widespread is really two. As data accumulates, the range of numbers decreases).

The flowers can be blue or purple, or pink or white or red or mottled.

I did research on morning glories and collected a number of species so I could compare them. I asked our talented greenhouse manager, Glen Drohman, to grow them for me. That was a harder request than it sounded, because most morning glories are vines. They got a few inches tall and then grew out from their flower pot to twine around neighboring plants. In a greenhouse, plants are put in individual pots so that you can move them around individually. When we picked up one of my morning glories, the neighboring pots would all tilt, because the morning glory had crossed over and entwined with them. Glen first provided the morning glories a wire shaped like a croquet wicket to climb on. That slowed their grabbing the neighbors but didn’t stop it. Finally he grew morning glories in groups of four pots and let the four become one horrible tangle but cut them off when they reached for other pots. Though he never said anything, he must have been delighted when I finished that research and went on to work on grasses.

Some morning glories are sprawling, for example the two morning glories of the beaches of the Gulf of Mexico and tropical beaches around the world, Ipomoea imperati and I. pes-caprae. They grow much better in the greenhouse.

A few morning glories are pretty woody (see Ipomoea carnea below) and one or two count as trees (from Mexico, I’ve never seen them).

Most morning glories have one-day flowers. The flowers open at a particular time, most often about dawn, and, by the time the day is hot, they have wilted, not to open again. One subgroup, the moon vines, have huge white flowers that open in the night, smell lovely and attract big moths to pollinate.  Most of the blue and purple morning glories are pollinated chiefly by bees. A few have red flowers, the American red ones pollinated by hummingbirds.

Most of the species in this big genus of similar but diverse plants are neither useful nor particularly annoying plants. Consequently it is a surprise to find that the sweet potato, a very important crop, is a morning glory, but it is, Ipomoea batatas. A second morning glory used as food is Ipomoea aquatica, Chinese water spinach, which is eaten like spinach in Asia. A number are or were used in herbal medicines around the world.

However, a group of fast-growing, vining morning glories are serious crop weeds. Because individual species are hard to distinguish, governments often lump all of them as weeds. Thus, the USDA Plants website lists morning glories generally, the whole genus Ipomoea, as noxious across the warmer parts of the U.S. Only one species is not marked as noxious, Ipomoea leptophylla. That’s unfair to various species, for example three rare species in Arizona (see, for example the comment on Desert Survivors website http://www.desertsurvivors.org/Nursery/MorningGlories.html)

Ipomoea leptophylla, the one species not on the noxious weed list, is the bush morning glory of the plains (the Dakotas, Wyoming, Nebraska, Colorado, Kansas, New Mexico, Oklahoma and Texas). It sprawls rather than twining and climbing. It is also a long-lived perennial. I marked plants in the Nebraska sandhills and all the big ones survived for all 10 years of my study. Projecting the turnover rates suggest they can easily live 100 years. You should visualize them as forest trees. We aren’t surprised if a tree lives to be 100.

Ipomoea leptophylla gets farther north than almost any other Ipomoea. You can plant the viny morning glories like heavenly blue and scarlet o’hara quite far north and they’ll reseed for a few years. But the bush morning glory has the northernmost range of a native morning glory. Since it is a member of a mainly tropical group, that is unusual. Probably key to its success is its deep root. The root goes straight down about 3 feet before it forms a big woody tuber. That should put the tuber below where the ground freezes even in a severe winter. The function of the tuber is unknown, although it seems likely it stores water.

I had to see the tubers for myself, so I dug up plants, with permission of the land owners.  Cattle rarely eat bush morning glory–like many morning glories, the foliage is pretty toxic–so ranchers were happy to be rid of a few plants, provided the holes were carefully filled in. Shown is a modest-sized one. Digging is feasible because the bush morning glory is a sand specialist–digging down 4-5 feet in sand is hard work but nothing like digging in finer or rockier soils. The above-ground plant grows to twice the size of the green leafy part seen here. Plants that size probably have tubers the size of basketballs. The really big one I dug up was too heavy for all the scales at the field station (Cedar Point Biological Station, Ogallala, NE) so I took it to a convenience store serving fishermen at Lake McConaughy and, using the scale for weighing fish, learned it weighted 25 pounds.

Note, therefore, that if you want bush morning glories in your yard–they’re for sale these days–that once they set that root down, they are extremely difficult to move.

Ipomoea longifolia of Arizona, one of the species unfortunately listed as a noxious weed, looks very similar to Ipomoea leptophylla, just larger–larger leaves, larger flowers. It lives in drier conditions than the bush morning glory, so it might well have larger tubers.

Another odd characteristic of the bush morning glory is that it tumbleweeds. One of the rarer methods by which plants disperse their seeds is by breaking off at ground level and then blowing, dead leaves, stems and ripe seeds and all, across the ground. The seeds fall off here and there in the process, spreading the plant. Most ecosystems have no tumbleweeding species at all.  Grasslands and desert grasslands have them more than other ecosystems, but it is still not a common method of seed dispersal. The bush morning glory does it. About Labor Day, an abscission layer forms, a row of cells that are particularly fragile, and then the top of the plant breaks off and the prairie winds blow it away. This is why the bush morning glory is particularly common along fencelines–the tumbling plant tops get caught at the base of our ubiquitous barbed wire fences and lots of seeds are dropped there.

Last year I went to the Amazon for the first time and encountered a quite different morning glory. The Amazon is a place every plant ecologist wants to visit. I resolved about 1973 to get there by 1984 “before it is all cut down.” I actually got there in 2012!  While there has been lots of cutting, today there are huge reserves. The situation is not at all perfect but it is a whole lot better than in the 1970s. World attention can make a big difference.

In February, I went from Lima, Peru to Iquitos, Peru in the upper Amazon and then upriver from there. This is the area that famously floods 30′ during the rainy season. The plants in the picture are standing in 15′ feet of water. I’m in a boat. The forest didn’t seem very tall because there was so much water.

Naturally I noticed the morning glories. I don’t have a definite identification of this plant. The Amazon has 100s of species of plants, including several viny morning glories with white to purple flowers. No one on the ship had a book with a complete list. I am still hunting for a reference that might allow me to make a guess at its name.  Identifying the morning glory is an unfinished project.

I was puzzled that these morning glories apparently had many feet of stem under water. That would drown most plants (with limited oxygen for their tissues, the cells suffocate).  The root of the bush morning glory certainly couldn’t take it–that plant is confined to well-drained soils which don’t run out of oxygen below ground.

Furthermore, some of these morning glories had ripe seeds, but the soil was deep underwater. There was no place for seeds to land on and germinate. I postulated that the seeds must float to the banks of the rivers–despite the rivers having risen 15 feet, there were some high spots that were not flooded–and lodge on mud flats there.

For my theory to work, the seeds had to float for quite a while. To check that, I got a water glass and set a handful of seeds in it. Four sank but four floated for the remaining four days of the tour. At the end of the tour, I needed to throw them out. My plan was to throw them into shallower water, hoping they’d survive. When I looked closely, I was very surprised to find one had germinated. That’s the seed that looks like a “T”, the base of the T is its new root reaching out. No need to wait for that mudflat. Like other plants of upper Amazon, they are adapted to the annual floods.

Not only are morning glories pretty, they are diverse and adaptable!

The story of P.J. Fleck’s one moment of NFL glory with the San Francisco 49ers