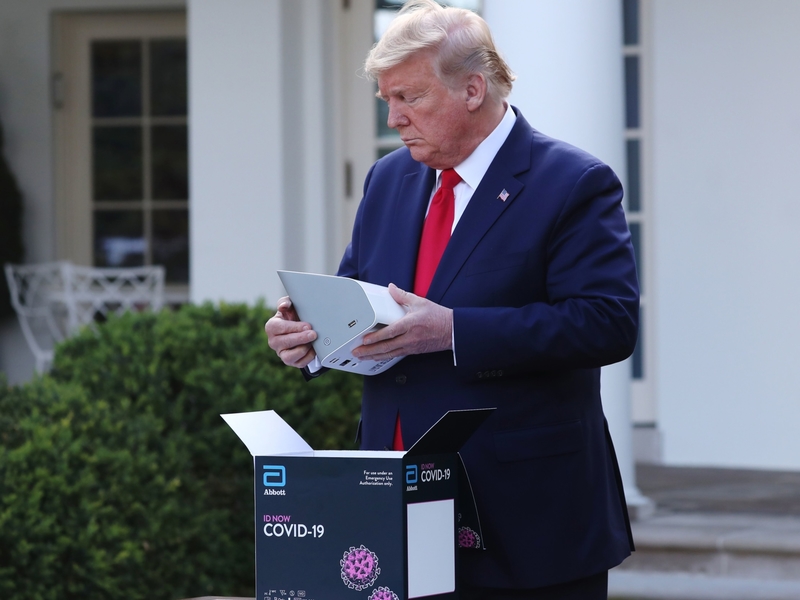 Abbott’s new test is seen as a big step forward in efforts to contain the rapidly spreading infection, which has sickened hundreds of thousands and killed tens of thousands around the world. Hailed as a “game-changer,” the test will help ease a testing shortfall that has hampered the response to the crisis in the U.S. and elsewhere. Using Abbott’s IDNow devices already installed in doctors’ offices and other health care facilities, the COVID-19 test delivers positive results within five minutes and negative readings within 13, without the need to send samples out to a laboratory.

Abbott says its system will rapidly accelerate testing volumes to as many as 50,000 per day, helping public health officials estimate the number of cases more accurately and fight the virus more effectively. By making diagnosis available outside hospitals, the test also takes pressure off front-line health care facilities treating waves of COVID-19 patients, and overburdened medical labs working their way through a backlog of samples.

“That’s a whole new ballgame. I want to thank Abbott Labs for the incredible work they’ve done,” said President Donald Trump, who showed off an IDNow device at a coronavirus briefing in the Rose Garden.

The thing is, Abbott wouldn’t own IDNow if it had succeeded in terminating a deal to buy the company that developed the technology. IDNow used to be called Alere-i, after Alere Inc., a Massachusetts-based medical device manufacturer that accepted a $5.8 billion buyout offer from Abbott in early 2016.

Abbott soon got cold feet, however, as problems in Alere’s business surfaced. Product recalls, a loss of Medicare billing privileges for a key Alere business line, delays in filing the company’s annual report, and investigations into its marketing and government billing practices soured Abbott on the acquisition. Alere said Abbott’s then-CEO, Miles White, offered $50 million to get out of the deal and threatened “living hell” if Alere insisted on going forward.

Alere sued to force Abbott to honor the deal. Abbott sued back, seeking to scotch the agreement under a contractual provision allowing it to walk away if Alere’s business suffered a “material adverse change.”

“Alere is no longer the company Abbott agreed to buy 10 months ago,” Abbott said at the time.

But Abbott backed down before a trial, agreeing to proceed with the

deal at a reduced price of $5.3 billion. The acquisition closed in 2017, and Alere became part of Abbott’s diagnostics business unit.

Does that mean Alere has turned out to be a home run for Abbott? Not necessarily. Abbott doesn’t separately disclose financial results for the various business lines acquired in the Alere deal. The company’s broader diagnostics business grew 2.9 percent last year to $7.7 billion, representing 24 percent of Abbott’s total annual revenue of $31.9 billion.

Still, he and White see point-of-care diagnostics as a winning bet.

“Nearly every health care decision begins with a diagnostic test,” said White, who is staying on as executive chairman after handing the CEO title to Ford on Tuesday. “And this testing not only occurs in the traditional hospital setting but increasingly at alternate sites such as physicians’ offices, pharmacies and even at home.”

At the very least, Abbott can count on a short-term sales windfall from its COVID-19 test. Over the longer term, the pandemic may also accelerate the growth of point-of-care diagnostics by underscoring the value of rapid, easily accessible testing for infectious diseases.

“You’ll see that even more after coronavirus,” says analyst Ashtyn Evans of Edward Jones. “A faster shift away from hospital settings toward getting a quick test at Walgreens, CVS or other locations.”

Oh boner, you didn’t whiz on Old Glory, did you?