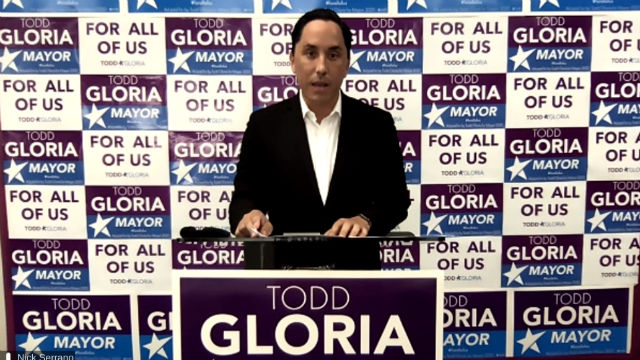 Mayoral candidate speaks at a press conference via Zoom on Friday. Image from livestream

Assemblyman and mayoral candidate Todd Gloria blasted his opponent Barbara Bry a day after a TV station retracted a story connecting him with the controversial 101 Ash Street purchase.

Speaking at a press conference via Zoom, Gloria said NBC 7 San Diego notified him of the retraction on Thursday, but has not yet apologized. He went on to accuse his opponent of taking unfair advantage of the false report.

Gloria said he wondered why Bry would “sink so low” as to place Facebook ads linked to the story and share it with over 100,000 people.

The report last week said then City Councilman Gloria promoted the controversial purchase to fellow council members despite potentially knowing of problems. The city recently stopped making payments on the 19-story building, which is unoccupied because of asbestos and other issues.

But, a law firm that investigated the purchase for the city in 2017 said a key footnote in a document cited in the TV report had been “completely fabricated.”

On Thursday, the station reported that “after further investigation, NBC 7 is retracting a previous story on the 101 Ash Street transaction, after it was determined a document had been fabricated.”

“It is imperative that we get to the real issues affecting San Diegans every day,” said Gloria, listing housing affordability, homelessness and the region’s recovery from the pandemic.

Both candidates are Democrats, but the San Diego County Democratic Party has endorsed Gloria. Party Chair Will Rodriguez-Kennedy joined Friday’s press conference in support of Gloria and criticized Bry’s actions.

Bry’s campaign denied that the document was the basis of her advertisements.

“Mr. Gloria’s claim that I’m running a negative campaign is ridiculous. It’s true that he and I have policy differences over such things as preserving local control over local land use decisions and reforming the city’s approach to transportation planning and homelessness, and I’ve pointed those differences out factually and fairly. But my campaign has not engaged in the kind of personal attacks and misrepresentations that have formed the foundation for Mr. Gloria’s campaign,” Bry’s statement read.

“Mr. Gloria’s news conference was an attempt to resurrect a failing campaign and shift (the) public’s attention from his responsibility for the terrible 101 Ash Street transaction. But it’s not going to work, because voters understand who is responsible and why, and they respect my persistence in getting to the bottom of this scandal.”

City Attorney Mara Elliott, who was also implicated in the now retracted article, issued a statement saying the public deserved to know who originally produced the fabricated documents.

“Our democracy is under attack from many directions, and reckless lies like this are designed to undermine public trust. San Diegans deserve to know the truth about who was behind this smear campaign, and how they got away with it for so long,” she said.