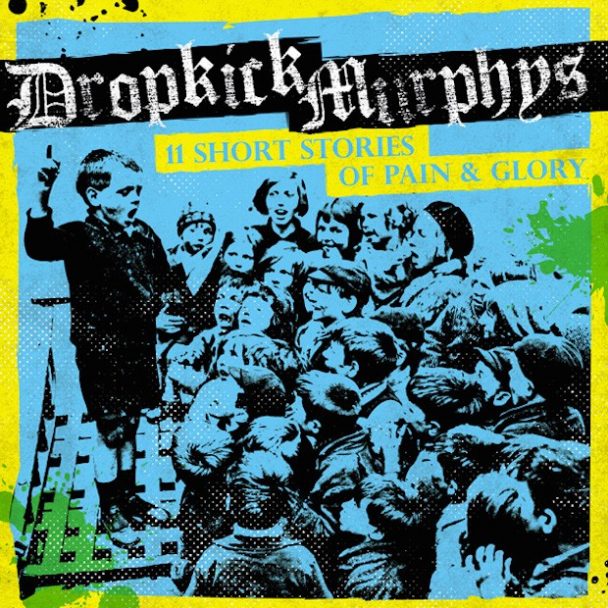 Very few punk rock bands get to become civic fixtures in their hometowns, but that’s what the Dropkick Murphys are in Boston. After 20 years and nine albums, they are, to my understanding, something like the local weatherman who’s been on TV every night at seven for the past 30 years. They’re just there, and if you live in or around Boston, they’re a sort of ambient part of your life. They may sing more about fighting than any other band that has ascended to their status, but there’s nothing threatening about them. Instead, they’re big advocates of local sports franchises and local charities. There are countless stories of the members of the band heading into hospital rooms, instruments in latex-gloved hand, to play private sets for ailing fans, and they’re now the sort of band that debuts a new song by sending its members onto the NHL Network to discuss the Bruins’ season. They’re good for at least one performance at a big game in Boston every year, and locally, they’re a big enough draw to headline the TD Garden, even if they’re strictly House Of Blues status in the rest of the world. Considering that this band got its start in the ’90s street-punk scene, that development is a weirdly inspiring one; it’s not like the Pist or Violent Society or the Swingin’ Utters or Aus-Rotten are now part of the cultural bedrock in their local communities. The Murphys are the rare punk band who have aged into respectability, and on their new 11 Short Stories Of Pain & Glory, that’s what they sound like. In a good way.

Founder Ken Casey has spoken of his wish to turn the Dropkick Murphys into a sort of punk version of AC/DC or the Ramones or Motörhead. These are bands that never really advanced aesthetically — or, when they did, those choices came to be seen as career missteps. But they’ve all become immortal anyway — partly by releasing important records in the moments that their genres were young, but also partly by doing one thing, over and over again, to something like perfection. That approach has its drawbacks, certainly. You basically know what a new Murphys album will sound like before you hear a note of it. But there’s a nobility in that dependability, too, especially since the band always attacks its admittedly kinda narrow chosen style with verve and force and emotion. And if you’re the type of person who needs a new slab of rousing, fired-up singalong anthems every few years, they’re a perfect band. They know what you want, and they give it to you.

Still, the Dropkick Murphys of this new album are not the Dropkick Murphys that I first met on the Give ‘Em The Boot compilation in 1997. It’s not that there’s been band-member turnover, though there’s been plenty of that. It’s that they no longer play with a feral intensity, like they’re just waiting for someone to pick a fight with them. The tempos are relatively slow on 11 Short Stories Of Pain & Glory. The production is thick and professional. There’s an ease, now, to what the Dropkick Murphys do, but that’s not the same as complacency. The difference, I think, is that they’re now writing songs for those big Boston rooms that they get to play every St. Patrick’s Day. They’re playing surging classic-rock riffs, and they’re playing them slowly enough that those riffs have room to breathe. They want everyone in the back row to be singing along with their choruses the second time they hear them, and they make that easy here. They still sound like a punk rock band. Their whole vocal style is still “a roomful of angry drunks yelling at you,” and that will never change (or, at least, I hope it never does). But there’s some arena-rock in there now, too, and it suits them.

The Celtic side of the band’s sound — the bagpipes and tin whistles and fiddles — used to be a sort of gimmick or affectation, albeit a great one. (It was a gimmick or affectation for the Pogues, too, and they sure as hell made it work.) But that’s less of a focal point now. The point now is the choruses — huge, anthemic, rousing, bittersweet. And they still hit big, sincere emotional notes with them. It’s tempting to hear cynicism in the band’s way of doing things, but I honestly don’t think it’s there. When I posted the band’s version of the old Broadway standard “You’ll Never Walk Alone,” some readers, in the comments, pointed out that the song is an anthem of the Liverpool Football Club and that Liverpool’s owners also own the Red Sox, which means they already have a relationship with the Murphys. But they don’t play the song like it’s a marketing opportunity; they play it like it’s the sort of message that has to be screamed out into the world. And Casey says that the band intended it to be a song for people suffering from opiate addiction, an anthem of strength and mutual support. That’s what it sounds like. Likewise, you could think cynically about how the album track “4-15-2013″ — about the Boston Marathon bombing — is showing up at the same time as the Peter Berg/Mark Wahlberg movie about the same subject, but then you’d be ignoring the fact that the people in the band know the bombing victims, that they were visiting them in the hospital in the immediate aftermath. This is the sort of band that does not fake that sort of thing. They mean it.

So: another album of utilitarian heartfelt moshpit singalong bangers, from a band that makes nothing but. The Dropkick Murphys are not a critically exalted band, and there are always going to be people who don’t hear anything worthwhile in what they do. But this is the type of shit that punches me directly in the heart, and I will always have time for it. There are, in my estimation, no bad Dropkick Murphys albums. Hell, there are practically no bad Dropkick Murphys songs, though some are a bit inessential. (I could’ve lived without the new-album track “I Had A Hat,” about threatening to fight everyone in a bar if your hat gets stolen, though it’s not like I skip it when it comes on.)

Still, for a band this relentlessly consistent, the Dropkick Murphys’ best moments are just tremendous. I’ve been to a Celtics home game in the past decade, which means I’ve seen the ripple that goes through the crowd when “Shipping Up To Boston” plays over the PA during a time out. And a similarly badass moment comes on the chorus of “Rebels With A Cause,” the new album’s second song. It’s a goosebumps-up singalong howler, one that takes full advantage of that Boston accent: “We believed in yew! We knew it from the staaht! Hey kiiiiiiid! You got haaaaaaht!” It does something to me. A lot of the songs on this album do something to me. Twenty years in, the Dropkick Murphys are still capable of making me feel alive the way few bands do. That matters. It will always matter.