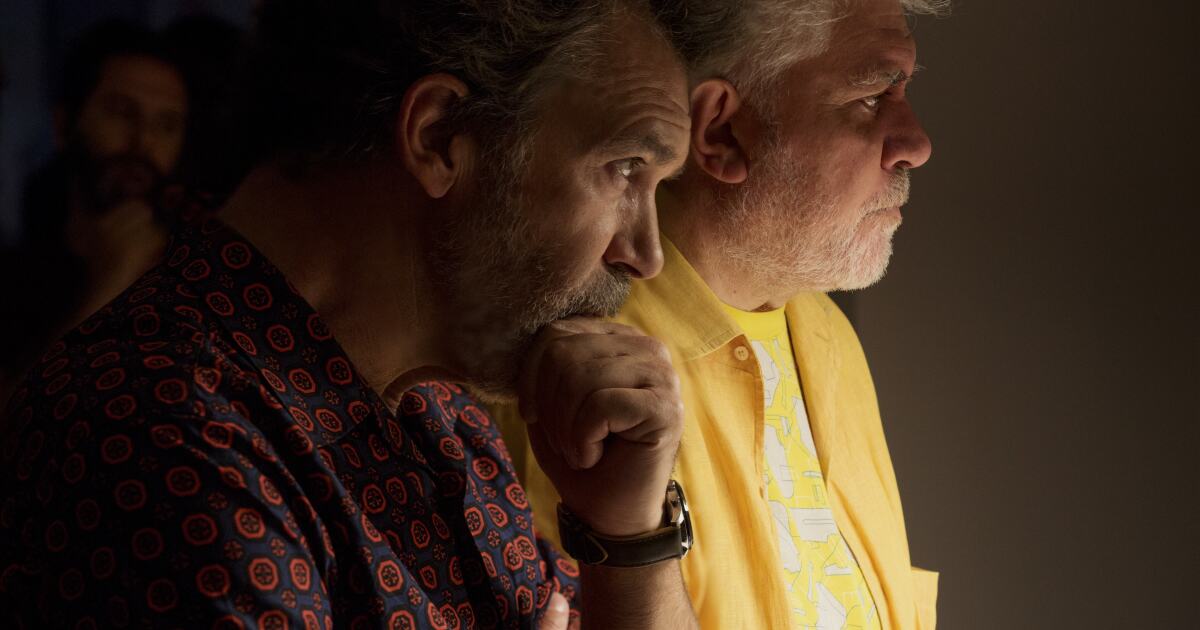 Two standing ovations. When the film “Pain and Glory” played at the recent Toronto International Film Festival, the audience first rose to its feet when filmmaker Pedro Almodóvar and star Antonio Banderas came out to introduce the movie and then gave a longer, rousing standing ovation after the film.

It appeared to be an emotional moment for the two men, who have a long relationship on and off the screen.

“It feels good,” said Banderas in an interview the next morning about the response to the movie. “I mean, what the heck, I’m not going to say, ‘Oh, no.’ It feels good because it means that the movie connected with the audience and when you are an artist that’s what you want.”

But it also means more than that. “Pain and Glory” is a reflective, emotional work about aging, but also about coming to terms with your past. Banderas made his screen debut in Almodóvar’s 1982 film “Labyrinth of Passion” and went on to appear in films that launched them both to international acclaim, such as 1987’s “Law of Desire,” 1988’s “Women on the Verge of a Nervous Breakdown” and 1989’s “Tie Me Up! Tie Me Down!”

And then they would not work together for more than 20 years.

Banderas left Spain for Hollywood to appear in movies such as “The Mambo Kings,” “Philadelphia,” “Interview With the Vampire,” “Desperado” and “The Mask of Zorro.” A four-time Golden Globe nominee, he was nominated for a Tony award for his Broadway debut in “Nine” and last year received his second Emmy nomination playing Pablo Picasso in the limited series “Genius.” He’s also currently on screen in Steven Soderbergh’s latest movie, the Netflix comedy “The Laundromat” (which also played the Toronto festival after premiering at the Venice Film Festival).

For his part, Almodóvar won an Academy Award for original screenplay for “Talk to Her,” which also earned him a best director nomination, and his “All About My Mother” won the Oscar for foreign language film.

Their professional reunion came on the 2011 film “The Skin I Live In,” a perverse thriller with Hitchcock overtones. “Pain and Glory” is their eighth movie together and is a deeply personal and earnest film from Almodóvar, with Banderas playing a fictionalized version of the filmmaker himself.

The film premiered in the main competition at this year’s Cannes Film Festival, where it garnered broad critical acclaim and Banderas received the best actor prize.

“From the moment that I received the script, not even on a professional level, but a personal level just to receive a script from a friend of yours that actually trusts you to play him …” said Banderas. “It was very beautiful at the beginning. And then the second thought is panicking, it’s both things at the same time.”

He added, “In reality, I wasn’t expecting at this particular time that Pedro was going to call me.” 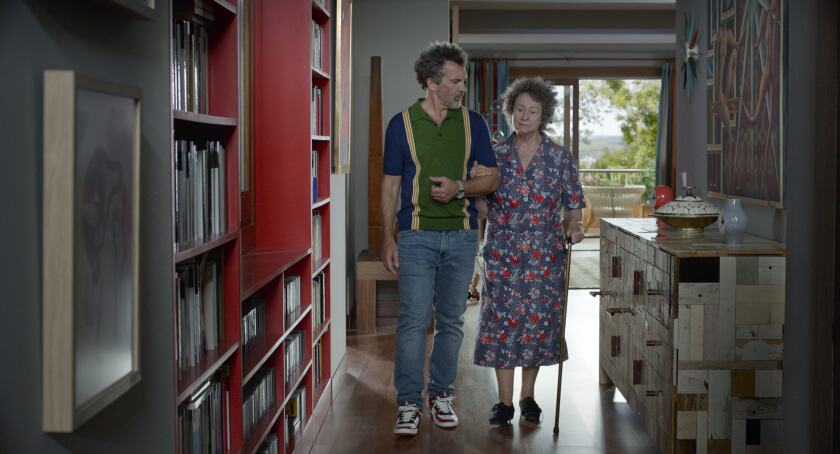 Antonio Banderas as Salvador, Julieta Serrano as Jacinta in a scene from “Pain and Glory.”

In the film Banderas plays Salvador Mallo, a film director suffering through health issues and a creative crisis at the same time. This causes him to reflect on his life, both while reconnecting with former colleagues and an old lover, but also while writing a script based on his own youthful memories of early desire. Penélope Cruz appears in the film as the mother of young Salvador.

“At least when I started, I didn’t know that it will become so personal as it is,” Almodóvar said in an interview a few days later. “There was a moment in the middle of writing the script — when I discovered that really the reference of the main character was myself — I hesitated for a while. Because I am very shy.

“I always based my stories in something real, but usually the reality was outside of me,” Almodóvar said. “There was a newspaper story, something that I heard, a book that I read, but it was always based on something real. But this was the first time that reality was my reality. Once I grew comfortable with that situation, for me it was mixed up with fiction. So I felt completely distant from the material. And when I was shooting, I never had the feeling that I was just shooting my autobiography; it was a movie.”

“It’s not so much that I wanted Antonio to look like me,” said Almodóvar. “I just wanted to make Antonio not look the way he looks. I just needed to change him. So I gave him my haircut. I gave him my clothes, I gave him my sneakers.

“He could’ve ended up looking very differently. But in terms of production, it was actually a lot more straightforward to just give him my clothes, give him my sneakers, my paintings — and it also suited the character. But I didn’t have the intent of making it a self-portrait.”

Antonio Banderas on his character in ‘Pain and Glory’

For Banderas, the raw, confessional emotions of the screenplay revealed new sides of someone he thought he already knew quite well.

“He’s very private in that respect. Personally,” said Banderas of Almodóvar. “We have been friends four decades, but it’s a friendship with certain limits because Pedro is a very private person and I always respected his privacy. And so when I saw the script, for me it was very surprising to see things that I didn’t know about him. Many people ask me that — what is biographical in this movie and what is not. Well … now I know things that I didn’t know, through this movie.”

The character of Mallo is able to do more than Almodóvar could in real life — “He’s more Pedro than Pedro,” as Banderas put it — able to say things the filmmaker “wanted to say and never said.” Such as when the character “has said to his mother

these things that [Almodóvar] never said to his mother.” 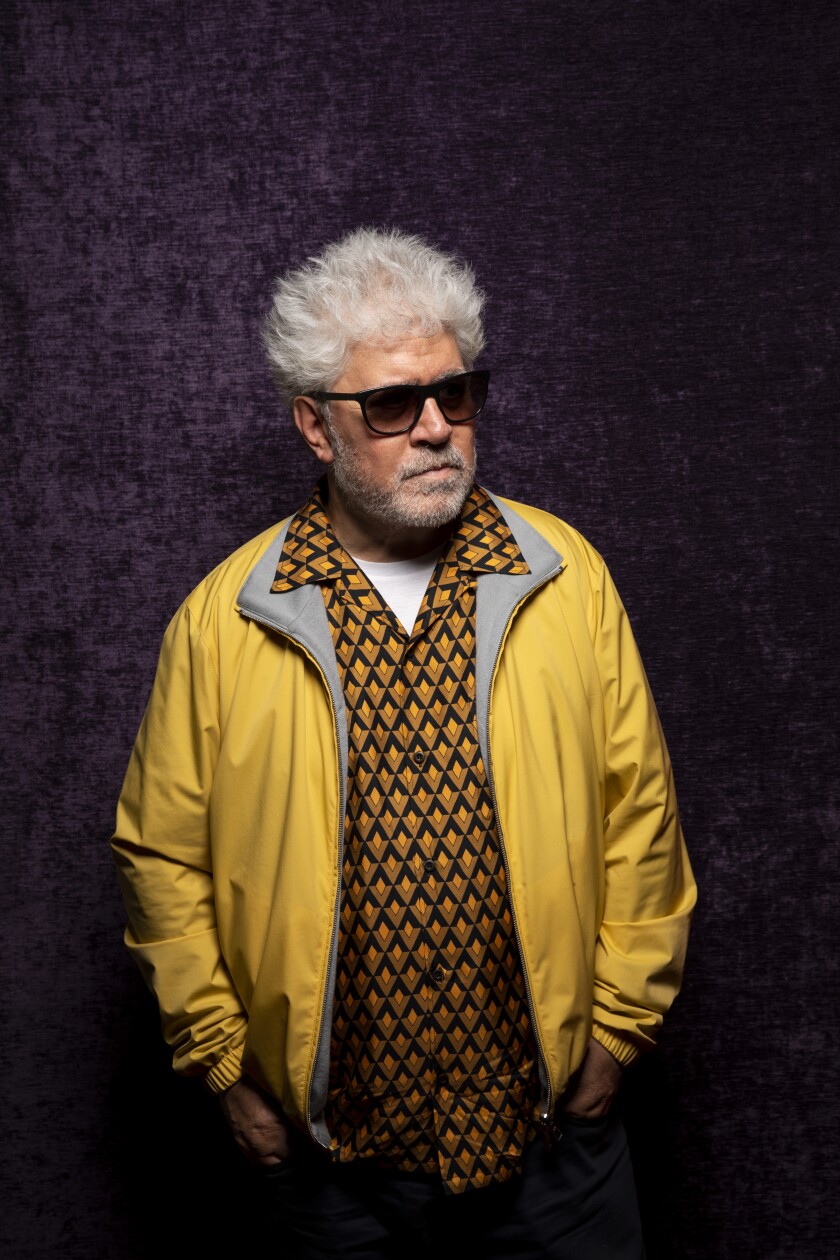 Director Pedro Almodóvar, whose new film is “Pain and Glory,” in the L.A. Times Photo Studio at the Toronto International Film Festival.

When the two reunited for “The Skin I Live In,” Banderas realized all that he had to leave behind to work with Almodóvar again, lessons he took with him into working on “Pain and Glory.”

“He showed me actually that I should trust him. And so I did,” said Banderas. “What I tried to do at the beginning of the whole entire process was to do a clean slate … Let’s start from the beginning, not use any of the tools that we have been using. Especially me, as an actor, you know what works for you, you have been accumulating these kind of experiences over years.

“Probably to call them tricks is not right, because they are not tricks, but things that you know have a certain effect. And so, let’s jump into another universe. Let’s start from nothing, creating a new you. And that ultimately is going to be [the character].”

In one of the key scenes in the movie, Salvador goes to visit an actor (played by Asier Etxeandia) he worked with earlier in his career before a falling out. Both Banderas and Almodóvar are careful to point out that the scene is not meant as a reflection of the dynamic between the two of them, as they stayed in touch even through all the years they were not working together.

“It feels like that character is a kind of Frankenstein composed of many of us,” said Banderas of the actor character. “And there are certain things in there that may be me, but there are things from other actors and actresses that have worked with him. Pedro is a tough director, he’s very meticulous, he’s very demanding and he’ll have very clear ideas of what he wants. So if you get out a little bit off that path, you’re in trouble. With Pedro you have to learn to abandon yourself a little bit.” The themes in “Pain and Glory” regarding making the most of the time you have left as you get older is not lost on Banderas. Since he had a heart attack in 2017, he has seen his perspective change.

This acclaim for “Pain and Glory” catches Banderas at an unusual moment. He has been living in England for the past few years and is preparing to open a theater in his hometown in Spain this fall, starring and co-directing in a production of “A Chorus Line.”

“I am in a place now, especially after the result of this movie, I just want to do things that are very, very interesting for me. Especially after Cannes, I made a decision, I’m going to do my theater, I’m going to work for that, I will do it and then I will just come out to do works that don’t have to do with money, that don’t have to do with other considerations but something that actually comes to me and says, ‘Oh, yeah, I want to play this. This is interesting for me.’

“So the heart attack was half-blessing. I know that sounds very weird. I don’t want to upset anybody that has a cardiac arrest because some people try to get out of me, ‘How was the heart attack?’ I don’t know. I can tell you about mine, but there are so many, some people just drop dead. But in my particular case it was like somebody shaking me and to discover in life a different way of what is important.”

It was a big moment for Banderas when he won the best actor award at Cannes for “Pain and Glory.” Almodóvar has never won the festival’s top prize, the Palme d’Or, even though he has competed there many times. Even so, he was not about to take any of Banderas’ spotlight.

“Do you know what Thierry Frémaux, the director of the festival, said to me?” Almodóvar said. “That it was a way for the jury to award me, and I said, ‘No, Thierry.’ This is a lot of work for Antonio because he really did something completely different than what we did in the past. So I think that he deserves it, absolutely. I felt awarded also because we made this work together, but … Thierry tried to tell me that it was an award for me, but it was all for him.”

“To tell you the truth, it was kind of surprising,” said Banderas of the prize, noting that he thought it would go to Brad Pitt or Leonardo DiCaprio for Quentin Tarantino’s “Once Upon a Time … in Hollywood” or the Italian actor Pierfrancesco Favino, star of Marco Bellocchio’s “Traitor.”

“And so I wasn’t expecting it, but suddenly they call me one morning and said, ‘You should stay here,’” Banderas recalled. “‘Why?’ I said. ‘You just stay, something good is going to happen.’ It was very beautiful. And after 40 years as a professional to have a recognition like that, it feels good.”