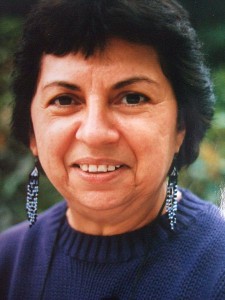 Born in 1942 in the Rio Grande Valley of south Texas to sixth-generation Mexicanos, this self-described “Chicana, Tejana, working-class, dyke-feminist poet, writer-theorist” was punished in grade school for her inability to speak English “properly,” yet is now recognized as a leading cultural theorist and a highly innovative writer (see Language). Her work, which is often cited by scholars in a wide variety of fields, has challenged and expanded previous views on cultural studies, ethnic identities, feminism, composition, queer theory, and U.S. American literature. As one of the first openly lesbian Chicana writers, Anzaldúa has played a major role in redefining lesbian and Chicano/a identities. And as co-editor of This Bridge Called My Back: Writings by Radical Women of Color, a ground-breaking collection of essays and poems widely recognized as the premiere multicultural feminist text, she played an equally vital role in developing an inclusionary feminist movement. Gloria Anzaldúa passed away in 2004. 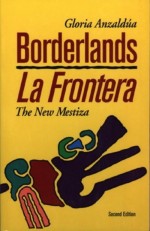 Anzaldúa’s published works include This Bridge Called My Back; Borderlands/LaFrontera: The New Mestiza (1987), a hybrid collection of prose, poetry, memoir, history, social protest, and revisionist myth; Making Face, Making Soul/Haciendo Caras: Creative and Critical Perspectives by Women of Color (1990), a collection used in many university classrooms throughout the country; and two children’s bilingual books – Friends from the Other Side/Amigos del otro lado and Prietita and the Ghost Woman/ Prietitay la Llorona. Her projects have included Interviews/Entrevistas, a collection of interviews; a collection of short stories; a novel-in-stories; a writing manual; a book of daily meditations; a young-adult novel; and and the edited collection This Bridge Called My Back, Twenty Years Later. Anzaldúa has won numerous awards, including the Before Columbus Foundation American Book Award, the Lamda Lesbian Small Book Press Award, an NEA Fiction Award, and the Sappho Award of Distinction (see also Gender and Nation, Third World and Third World Women).

Throughout her work Anzaldúa explores a diverse set of issues, including (but not limited to) the destructive effects of externally imposed labels and the interlocking systems of oppression that marginalize people who – because of their class, color, gender, language, and/or sexuality – do not belong to dominant cultural groups: Chicana/o identities; lesbian sexualities; butch/femme roles; bisexuality; altered states of reality; transformational identity politics; and homophobia and sexism, within both the dominant US culture and Mexican-American communities.

Although Borderlands/La Frontera defies easy classification, it can perhaps be described as cultural autobiography. In this hybrid collection of poetry and prose, Anzaldúa transgresses conventional literary genres and blends personal experience with history and social protest with poetry and myth to construct self-affirmative individual and collective identities. Even her linguistic style, or “code switching,” – her transitions from standard to working-class English to Chicano Spanish to Tex-Mex to Nahuatl-Aztec – furthers this attempt to integrate personal and communal self-definition. Interweaving accounts of the racism, sexism, and classism she experienced growing up in south Texas with historical and mythic analyses of the successive Aztec and Spanish conquests of indigenous gynecentric Indian tribes, Anzaldúa simultaneously reclaims her political, cultural, and spiritual Mexican/Nahuatl roots and constructs a mestizaje identity, a new concept of personhood that synergystically combines apparently contradictory Euro-American and indigenous traditions (see Mimicry, Ambivalence, Hybridity, Hybridity and Postcolonial Music).

Borderlands/La Frontera has played a formative role in the ways contemporary scholars think about border issues, the concept of the borderlands, ethnic/gender/sexual identities, and conventional literary forms. Anzaldúa extends the previous views of the borderlands as a distinct geographical location to encompass psychic, sexual, and spiritual borderlands as well (see Benedict Anderson). Her concept of the new mestiza has been equally influential, for it goes beyond biological identity categories to incorporate other forms of identity as well. For Anzaldúa, new mestizas are people who inhabit multiple worlds because of their gender, sexuality, color, class, personality, spiritual beliefs, or other life experiences. Borderlands/La Frontera and in her other writings, Anzaldúa redefines twentieth-century definitions of lesbian identity. She rejects the ethnocentrism implied by the words “lesbian” and “homosexual” and adopts culturally-specific terms like “mita’y mita’” (“half and half”) to describe her sexual preference. As she acknowledges these terms’ derogatory implications, she simultaneously challenges conventional Eurocentric sexual and gender categories and exposes Mexican Americans’ heterosexism, homophobia, and sexism. Associating physical desire with her desire to reclaim her cultural roots, Anzaldúa expands conventional western notions of lesbian identity in three ways. First, by identifying her sexuality with non-Western cultural traditions, she counters the commonly held Chicano belief that same-sex desire indicates ethnic betrayal or assimilation into the dominant Anglo culture. Second, her simultaneous focus on sexuality and ethnicity complicates conventional Eurocentric descriptions of lesbian identity formation, thus providing an important corrective to the monolithic images of lesbian identity found in much twentieth-century Euro-American lesbian literature. And finally, this dual focus on sexual and ethnic identities underscores Anzaldúa’s ability to make complex negotiations between two or more apparently disparate communities.

Anzaldúa’s Making Face, Making Soul/Haciendo Caras indicates a further extension of this desire to create alliances and dialogues among diverse peoples. In this 1990 anthology of creative and theoretical pieces by self-identified women of color, Anzaldúa attempts to develop coalitions between nonacademic and academic social activists. In the preface, she rejects the inaccessible, elitist nature of

academic “high” theory and underscores the importance of inventing new theorizing methods, “mestizaje” theories, that create new categories for those of us left out or pushed out of the existing ones.