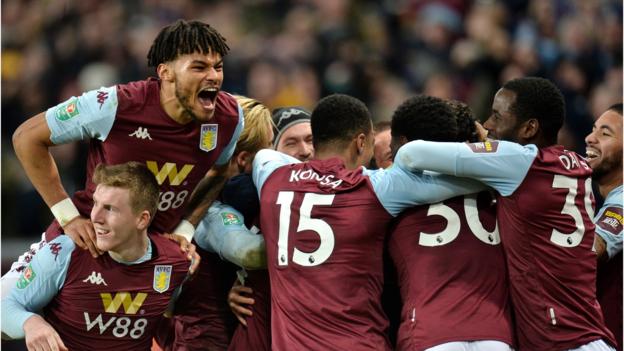 Trezeguet was mobbed by his team-mates at full-time

Aston Villa manager Dean Smith says he would be “a very proud man” if he could lead his boyhood club to Carabao Cup glory after Trezeguet’s injury-time goal against Leicester City sent them to Wembley.

The semi-final second leg at Villa Park had entered four minutes of stoppage time and penalties were looming when substitute Ahmed Elmohamedy sent over a superb cross for Trezeguet to drill a far-post finish across Leicester keeper Kasper Schmeichel.

It sparked wild scenes of joy and a pitch invasion at Villa Park, as the hosts reached their first showpiece final since the FA Cup in 2015, when they lost 4-0 to Arsenal.

Villa – who face either Manchester City or Manchester United in the final – were indebted to goalkeeper Orjan Nyland for a string of magnificent first-half saves that allowed them to go in at the interval leading through Matt Targett’s 12th-minute strike.

And the hosts were enjoying their best spell of the game when Kelechi Iheanacho turned in Harvey Barnes’ cross with 18 minutes left, leaving the momentum with Brendan Rodgers’ side.

But Trezeguet’s late intervention means Smith’s side will be in their first EFL Cup final since 2010, when they lost to Manchester United.

“I certainly let myself go when we scored that goal,” said Smith.

“We know how good Leicester are, and have been this season, but we made it an entertaining game, so I’m very proud of the performance and the effort that the players put in.

“We’ve got a proud history in this competition and if we could go and lift this trophy for a sixth time as a club then I would be a very proud man.

“We know it’s going to be tough against either Manchester United or Manchester City. But the hard part is getting to a domestic cup final and we have managed to do that against a very good Leicester team.”

Villa had two standout performers on this glory night as the hosts produced a finale that left Leicester with no chance of a comeback in the dying seconds of a thunderous encounter.

Nyland formed a one-man barrier against a barrage of Leicester attacks as the Foxes went for the kill in the first half.

The 29-year-old Norwegian produced an astonishing string of saves, particularly two low down from James Maddison and arguably the best of all when he touched Youri Tielemans’ rising drive on to the bar.

“We are indebted to Orjan, who made three great saves. He was really top drawer,” said Smith. “He’s certainly given me a conundrum [about who to start in the final] but it’s the type of decision I want.”

It kept Villa in contention and protecting that precious lead given to them by Targett, allowing Grealish to exert his own influence both as a creator and someone who could hold the ball in moments of stress.

Grealish should have set up a debut goal for £8.5m striker Mbwana Samatta, who somehow failed to even get a touch on his cross from six yards out with the goal at his mercy.

Samatta, who was substituted, will have been a relieved man when Trezeguet produced that decisive finish and

Villa were on their way back to Wembley, a place they last sampled when they beat Derby County in the Championship play-offs last season.

Heartbreak for Leicester and Rodgers

Leicester and manager Rodgers will reflect on this night and feel the fates were against them, from Nyland having the game of his life to an incident in the first half when VAR did not award a penalty for handball against Marvelous Nakamba.

Leicester had their chances to win, with Jonny Evans’ header dropping agonisingly wide in the closing seconds, only for Villa to sweep upfield and make that last chance count.

This has been an outstanding season for Leicester as they look destined for the top four in the Premier League and a return to the Champions League, but this will still be a bitter disappointment for Rodgers and his players, who lay flat on the turf as Villa’s players celebrated the winner.

And for Rodgers, it was more punishment at the hands of Villa, who beat him in the 2015 FA Cup semi-final at Wembley when he was Liverpool manager.

“I’m absolutely gutted for the players. I felt over the two games that we were the better side but congratulations to Aston Villa. They won and they are through,” said Rodgers.

“We are bitterly disappointed. We created enough opportunities and we just switched off right at the end. It’s so late on in the game that it’s difficult to come back from that.

“The players are hurting, and they will tomorrow as well, but it’s part of it at this level and you have to take that – and it hurts. But that help will help going forward.”

Man of the match – Orjan Nyland

Villa will turn their attention to Premier League survival when they travel to relegation rivals Bournemouth on Saturday. On the same day Leicester look to bolster their place in the top four when they host Chelsea.