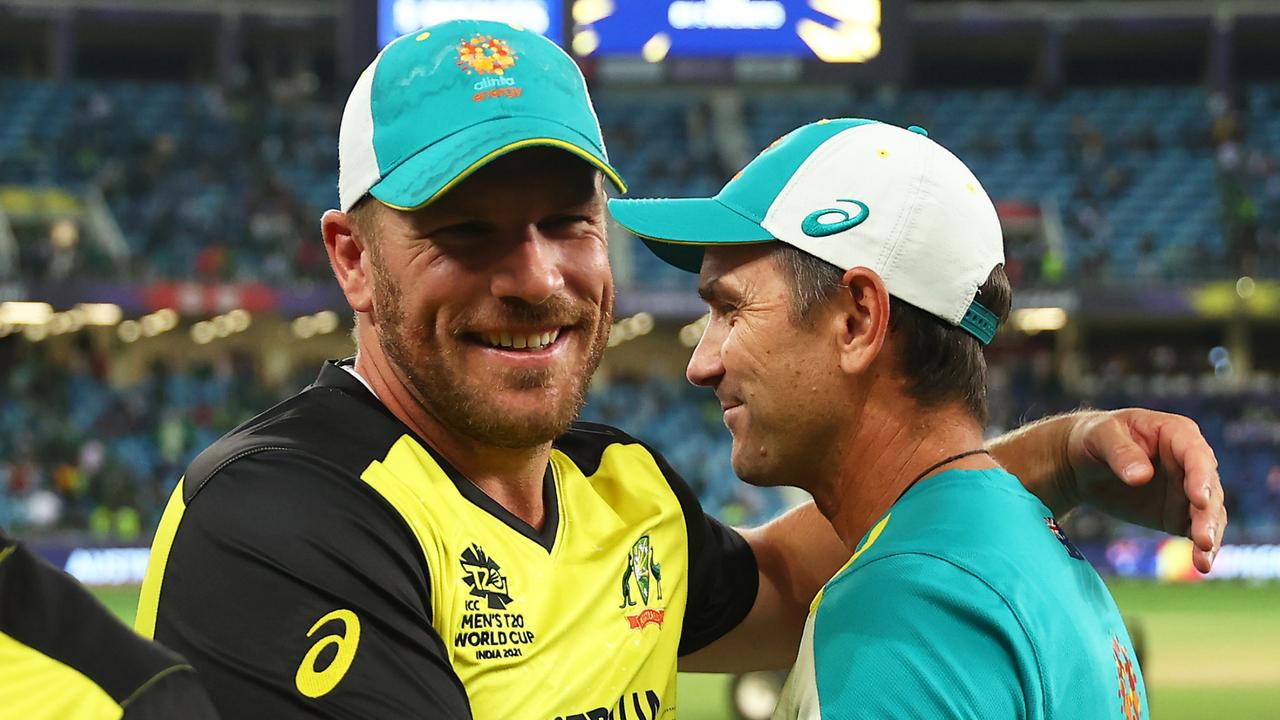 One word comes to Justin Langer’s mind when he’s asked to describe the attitude his troops will need on T20 World Cup judgement day.

They’ll need to be “fearless”.

The Aussies shattered expectation after expectation on their way to the knockout stage of the tournament and with their victory over Pakistan on Saturday morning (AEDT), they’re now just 40 overs away from tasting T20 World Cup glory for the very first time.

Australia take on New Zealand in the ICC T20 World Cup Final on Monday (1am AEDT) on Kayo. New to Kayo? Start your free trial today.

WATCH:Warner breathes GIANT sigh of relief as teammates save him from horror moment

When it meets New Zealand on Monday morning (AEDT), Australia has the chance to write the final chapter in a cricket fairy tale for the ages. To beat the Kiwis though, Langer says the Aussies will need to play out of their skins.

“The way (New Zealand) have gone about their business for the last few years has been outstanding,” Langer told reporters on Friday evening (AEDT).

“They get on with the job and they get it done. So we’re going to have to be at our best, like we have been throughout this tournament, to beat New Zealand.

There’s no doubt the Aussies will need to turn in a skilled performance when they meet their traditional rivals, but just as important in Langer’s eyes is the mental game.

“It’s very important that we have the mindset, whether we bat first or bowl first, that we can win from any situation,” he said. Langer has ample evidence that Australia is up to the task.

He’s seen moments of what he calls “fearless cricket” peppered

throughout his side’s World Cup campaign.

The clash against Bangladesh comes to his mind – knowing a good net run-rate could be the difference between a semi-final berth and an early flight home, the Aussies powered through their second innings to surpass Bangladesh’s total by the seventh over.

It proved to be a crucial captain’s call from Aaron Finch – at the end of the Super 12 stage, Australia qualified for the semi-finals on net run-rate, largely thanks to that speedy batting display.

“(The Bangladesh chase) is a real blueprint for this tournament, but also into the future for Australia’s white-ball cricket,” Langer said.

“That’s what you’d call fearless cricket and if we’re going to win this tournament, we’ve got to continue on with the way we played from Bangladesh.

“That fearless or aggressive batting is going to be crucial.”

Langer’s men are just as aware that nothing can be left in the dressing rooms in the wee hours of Monday morning, Australian time.

“New Zealand have something about them,” said spin sensation Adam Zampa, who has claimed the second-most wickets of any man at the World Cup.

“They’ve made a couple of finals in other formats and they’ve taken it really deep in this format as well.

Marcus Stoinis, one of Australia’s semi-final heroes, is eager to enter the history books by rising to that challenge.

“We’ve got the attitude that there’s absolutely nothing to lose; there’s only some great memories to be made,” he said.

“It’s definitely going to mean a bloody lot to us.

“We’ll be super proud when we bring it home for Australia.”