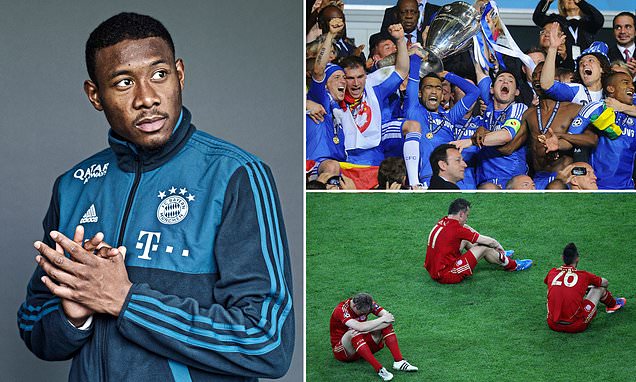 Memories of May 19, 2012, are seared on to the souls of Bayern Munich players.

‘This city was burning,’ says David Alaba, star of this current Bayern team, a burgeoning youngster back then. ‘It was on fire!’

The Champions League final had come to town and Bayern Munich had fought their way through for the right to contest it in their home stadium.

‘Our City, Our Stadium, Our Cup,’ read the vast banner at the Bayern end, surrounding a huge image of the famous old European Cup.

It had been 11 years since they had last won that trophy. The sense of destiny hung heavy in the spring evening at the Allianz Arena.

‘We played against Real Madrid in the semis,’ continues Alaba.

This was Jose Mourinho and Cristiano Ronaldo’s record-breaking Real Madrid, the team that beat Pep Guardiola’s Barcelona to the title and accumulated 100 points.

‘I still remember that game and how we came through. We had a great team, great team spirit. But I got my yellow card in this game, I was not able to play in the final.’

Alaba was confined to the stands on that fateful day. ‘We played a hell of a game against Chelsea,’ he recalls.

In simpler terms, Bayern lost to Chelsea, a night also indelibly etched into the memories of Blues fans and, of course, current manager Frank Lampard.

The twist came from Didier Drogba’s 88th-minute headed equaliser. Even then, Bayern missed a penalty in extra time.

Juan Mata missed Chelsea’s first penalty in the shootout, though Lampard scored and eventually Drogba, 34, won the trophy with his spot-kick.

‘It was painful,’ Alaba recalls. ‘Not to be able to help the team, especially in a game like that, a Champions League final and then we didn’t win.

It was a double penalty. It’s not a nice feeling. But after this game I felt very fast already that: “OK, this team is special and we can do something next year”. I think how we lost this game was also a big deal, because we were better.

‘We deserved to win this game against Chelsea. You felt something in the team we are special, we can do something more. And when preseason started for the next season you could see how hungry every single player was and how we worked.

‘We put those two, three, four, five per cent on top to reach our goals. And then in 2013 we wrote an unbelievable story.’

Under Jupp Heynckes, they won the treble, including the Champions League final against Jurgen Klopp’s Borussia Dortmund at Wembley.

Then came the Guardiola era and another three Bundesliga titles and two German Cups, though no more Champions Leagues.

Chelsea take on Bayern again later this month for the first time since 2012. Alaba, Muller, Boateng and Neuer remain and are serial winners.

Bayern are on course for an eighth successive Bundesliga title. Alaba has been integral to their success, the 27-year-old Austrian made his debut here at 17, and recently celebrated his 10th anniversary in the first team.

A certain Louis van Gaal gave him his debut. ‘He gave me a lot of trust,’ says Alaba. ‘He threw me into the cold water early and today I’m grateful for that. He was a manager who was very “mutig” [brave] at this time.

‘He brought out Thomas Muller, Holger Badstuber and

me. He brought a lot of football instinct with him and you could feel in every single practice he has a plan and he knows what he wants.’

Primarily a full-back, Guardiola encouraged Alaba into central midfield, which is where Hansi Flick, Bayern’s interim coach, has been using him. He’s filled in as a No8 and No6 in central midfield and on the left wing.

Alaba has been integral to the German side’s success, having made his debut there aged 17

‘I played No10 for Austria,’ he says, beaming. Alaba’s journey to Munich is a fascinating one.

His father George is a celebrity in Austria, as is pop star sister Rose May. George, a crown prince from Ogun state in Nigeria, arrived in Vienna in 1984 to study economics and met his future wife, Philippine-born Gina.

But he also worked as a DJ and recorded a hit record. ‘Oh yeah, he was a singer, he had a group and they achieved a gold disc,’ says Alaba.

‘My parents came a long time ago to Vienna, met in Vienna. Of course they had to go through a lot also, but we’re very happy to have our home in Vienna.’

Football dominated his young life. ‘When I was small I was following the Premier League a lot, and when I was a younger player I supported Arsenal. Patrick Vieira was one of my favourite players.’

Primarily a full-back, Guardiola encouraged Alaba into central midfield where he now plays

Might we see Alaba in the Premier League one day? ‘We’ll see. At the moment, I don’t think too much about it, but I can imagine playing somewhere else in my future.’

Vienna wasn’t particularly multicultural back in the 1980s. ‘Back in the days, when me and my sister weren’t born yet, it wasn’t that easy, like maybe it is today,’ he says.

‘Of course, I had things when I was a young boy in my school or also in the street. If you put everything together, maybe not that much. But I had problems there too.’

He is well versed in the recent problems English football has encountered with a fresh wave of racism and the threat by the England team to walk off the pitch.

Alaba says: ‘It’s sad that players have to say something, because everybody sees it and everybody hears it, so why should the players [have to] do something? It’s not easy, they have to do their job. It’s sad players have to take their courage and go to the coach or referee. We have to find a solution.’

There are a growing band of players willing to put aside their instinctive desire to play in order to make a bigger point by walking off.

‘Of course you want to finish the game but if it [the abuse] is that hard…? I think football is a game where people come together and football should bring everybody together, whether it is religion or skin colour or where you come from.

‘We should be happy to enjoy that moment together, those 90 minutes where we can show love. Because I think football is love — and when love is not there, for what should we play?’

Bayern need to find a balance between domestic dominance and a return to the pinnacle of European football. Two Champions League wins in 43 years feels a little light for one of Europe’s powerhouses.

‘I think we’re in a good way to reach our goals and maybe also to make a dream come true in the Champions League,’ he adds.

First, though, there is the ghost of Chelsea 2012 to exorcise.