Throughout antiquity, Egypt’s standing relied on its agricultural wealth and, therefore, on the Nile. Agriculture had not been the original basis of subsistence, but evolved, together with the land itself, during the millennia after the last Ice Age ended around 10,000 BC, expanding greatly from about 4500 BC onward.

By 3100 BC the Nile Valley and Delta had coalesced into a single entity that was the world’s first large nation state. As well as providing the region’s material potential, the Nile and other geographical features influenced political developments and were significant in the development of Egyptian thought.

The land continued to develop and its population increased until Roman times. Important factors in this process were unity, political stability, and the expansion of the area of cultivated land. The harnessing of the Nile was crucial to growth.

It is uncertain how early and by how much the inundation was regulated. By the Middle Kingdom (c.1975-1640 BC) basin irrigation, in which large sections of the floodplain were managed as single units, was well established, but it may not have been practised in the Old Kingdom (c.2575-2150 BC), when the great pyramids were built. The only area where there was major irrigation work before Graeco-Roman times was the Faiyum, a lakeside oasis to the west of the Nile. Here Middle Kingdom kings reclaimed land by controlling the water flow along a side river channel and directing it to irrigate extra land while lake water levels were lowered. Their scheme did not last.

Egyptian texts say little about irrigation and the provision of water. Exceptions are biographies of local leaders of the disunited First Intermediate Period (c.2125-1975 BC), who claimed that they built canals and supplied water to their own people when others had none. In more prosperous times such matters may have been taken for granted or not thought worth mentioning in public texts.

The Nile’s annual inundation was relatively reliable, and the floodplain and Delta were very fertile, making Egyptian agriculture the most secure and productive in the Near East. When conditions were stable, food could be stored against scarcity. The situation, however, was not always favourable. High floods could be very destructive; sometimes growth was held back through crop failure due to poor floods; sometimes there was population loss through disease and other hazards. Contrary to modern practice, only one main crop was grown per year.

Crops could be planted after the inundation, which covered the Valley and Delta in August and September; they needed minimal watering and ripened from March to May. Management of the inundation in order to improve its coverage of the land and to regulate the period of flooding increased yields, while drainage and the accumulation of silt extended the fields. Vegetables grown in small plots needed irrigating all year from water carried by hand in pots, and from 1500 BC by artificial water-lifting devices. Some plants, such as date palms, whose crops ripened in the late summer, drew their water from the subsoil and needed no other watering.

The river provided the principal source of protein
©

The principal crops were cereals, emmer wheat for bread, and barley for beer. These diet staples were easily stored. Other vital plants were flax, which was used for products from rope to the finest linen cloth and was also exported, and papyrus, a swamp plant that may have been cultivated or gathered wild. Papyrus roots could be eaten, while the stems were used for making anything from boats and mats to the characteristic Egyptian writing material; this too was exported. A range of fruit and vegetables was cultivated. Meat from livestock was a minor part of the diet, but birds were hunted in the marshes and the Nile produced a great deal of fish, which was the main animal protein for most people.

Detail from a tomb painting showing birds being hunted
©

These features are known from finds of plant and animal residues and from texts. The Egyptians also celebrated their world in the decoration of tombs. There we see many images of agriculture and animal husbandry, but the Nile itself is largely absent. Instead, the focus of watery scenes is on marshes where game was hunted and on small watercourses that were crossed by peasants and herders. Pictures in temples of major festivals and of the return of trading and transport expeditions that used large ships are the main representations that show the river explicitly. These scenes brought glory to the king, who commissioned the expeditions.

The Delta and its mouths posed obstacles to invaders.

The shape of the land was significant in other ways. The Delta and its mouths posed obstacles to invaders. Travel into the desert or to Asia was altogether more difficult than movement within Egypt, where the ease of boat travel on the Nile was a major unifying force in such a long, thin country. In social terms, however, the river could also separate people. The image of a poor man was someone who had no boat, whom the more fortunate should ferry across. Dying was ‘coming to land’ on the other side, and the passage into the next world was a ‘crossing’.

The compactness of Egypt, focused on the Nile, favoured political unity, which brought both potential for exploiting the land’s fertility and obligations for rulers. Kings controlled agricultural resources through ultimate ownership of land, taxation of its produce, administrative measures to ensure that it was cultivated, and compulsory labour. In return for control, they were responsible for storage and for provision against failures, so that they took upon themselves much that is achieved through cooperation in small societies.

The increasingly centralised organisation of the third millennium BC created a disciplined labour force, which was used to build vast royal monuments and elite tombs. This force worked to

create the fortifications and pyramids of the Middle Kingdom, and following the imperial expansion built the temples and tombs of the New Kingdom (c.1550-1070 BC). It also made possible the building and other activities of the Graeco-Roman period.

Effective organisation and the productivity of inundation agriculture made all this possible, freeing people to follow specialised and elite occupations while releasing them temporarily from the land during the slack summer months. When central control collapsed, chiefly in the three Intermediate periods (c.2125-1975, 1630-1520, 1075-715 BC), few monuments were constructed and there was little political expansion.

Despite this, the agricultural basis of power and prosperity was not destroyed, and after reunification monumental projects and high culture revived. However, for most people the diversion of labour made possible by high productivity was not a personal benefit, but served rulers and elites. Except in times of great political instability, the lot of many may have been as good or better in the Intermediate periods, although traditional values probably always favoured centralised government to some extent.

The Nile god Hapy, from a statue of Ramesses II in the temple of Luxor
©

The Nile, so fundamental to the country’s well-being, did not play a very prominent part in the religious life of Egypt. The Egyptians took their world largely for granted and praised the gods for its good features. There was no name for the Nile, which was simply the ‘river’ (the word ‘Nile’ is not ancient Egyptian). The bringer of water and fertility was not the river but its inundation, called ‘Hapy’, who became a god. Hapy was an image of abundance, but he was not a major god.

Kings and local potentates likened themselves to Hapy in their provision for their subjects, and hymns to Hapy dwell on the inundation’s bountiful nature, but they do not relate him to other gods, so that he stands a little apart. He was not depicted as a normal god but as a fat figure bringing water and the products of abundance to the gods. He had no temple, but was worshipped at the start of the inundation with sacrifices and hymns at Gebel el-Silsila, where the hills meet the river, north of Aswan. 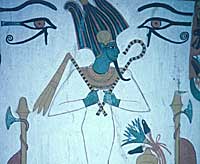 The major god most closely connected with the Nile was Osiris
©

The major god most closely connected with the Nile was Osiris. In myth Osiris was a king of Egypt who was killed by his brother Seth on the river bank and cast into it in a coffin. His corpse was cut into pieces. Later, his sister and widow Isis succeeded in reassembling his body and reviving it to conceive a posthumous son, Horus.

Osiris, however, did not return to this world but became king of the underworld. His death and revival were linked to the land’s fertility. In a festival celebrated during the inundation, damp mud figures of Osiris were planted with barley, whose germination stood for the revival both of the god and of the land.

The Nile and its inundation were basic to the Egyptian world-view. Unlike most peoples, the Egyptians oriented towards the south, from which the river came, so that the west was on their right – with the result that it was the ‘good’ side for passage into the next world. The year and calendar were adjusted to the Nile and the stars. New Year was in mid July, when the river began to rise for the inundation; this coincided approximately with the reappearance of the star Sirius (Egyptian Sothis) in the sky after 70 days’ invisibility. Sothis provided the astronomical anchor for the 365 day calendar. The river defined three seasons of four months: ‘Inundation’ and ‘Emergence’ (November-March) when the land reappeared and could be cultivated, and ‘Heat’ or Harvest, when crops were gathered and the water was lowest.

…they termed rain in other countries an ‘inundation in the sky’.

In some ways, the Nile’s fundamental importance for the sustaining of human life may be more obvious to us than it was to the ancient Egyptians. They thought of its regular flooding, so essential for the fertility of the land it ran through, as the natural state of affairs – so much so that they termed rain in other countries an ‘inundation in the sky’.

In order to appreciate the Nile’s position in antiquity, we should see it through ancient eyes, remembering the ancient distinctions between the divine and the human. The Egyptians had a relatively matter-of-fact attitude towards the river, whose inundations could sometimes cause destruction but were seen a beneficent moral force. Egyptian gods, by contrast, were seen as complex beings whose abode was outside the physical world of the land and river. It was left to the Greeks and Romans to make a god of the Nile, as they had of the other rivers of the world.

A virtual tour of Ancient Egypt: 3-D tour of the major Ancient Egyptian sites from the Sphinx to the temple of Rameses III.

John Baines is Professor of Egyptology at the University of Oxford. He is co-author with Jaromir Malek of Cultural Atlas of Ancient Egypt (2nd edition, 2000) and author of Fecundity figures: Egyptian personification and the iconology of a genre (reprinted 2001).