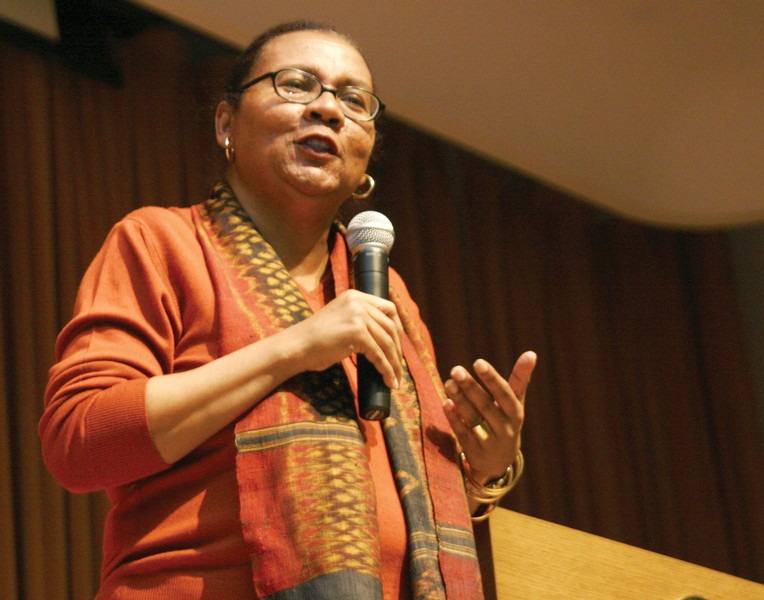 Writer, teacher, and cultural critic bell hooks was born Gloria Jean Watkins on September 25, 1952, in Hopkinsville, Kentucky, to a poor working class family.  Her father, Veodis Watkins, was a janitor for the local post office, and her mother, Rosa Bell Watkins, was a homemaker, raising Gloria and her six siblings.

Gloria Watkins attended racially-segregated public schools in Hopkinsville as a child.  She performed poetry readings for her church community and was heavily influenced by her great-grandmother, Bell Hooks, who was known for her sharp opinions.  As a writer, she chose the pseudonym bell hooks in tribute to her mother and great-grandmother.  She decided not to capitalize her new name to place focus on her work rather than her name, on her ideas rather than her personality.

Watkins attended Stanford University on scholarship.  She graduated in 1973 and went to The University of Wisconsin at Madison, where she earned a Master’s degree in English literature in 1976.  In 1983, she obtained her Ph.D. at the University of California-Santa Cruz, having completed her dissertation on the work of novelist Toni Morrison.

Frustrated by the lack of interest in race issues by white women scholars and gender issues by black male scholars, she wrote her first major book, Ain’t I a Woman : Black Women and Feminism (1981).  In this book, she centralized the intersection of race, sex, and class at the core of black women’s life.  She argued that each identity has the ability to

produce and perpetuate systems of oppression and domination.  The book established her as a formidable critic and intellectual, and set out some of the central themes that have characterized her later work.

Hooks accepted a joint appointment in English and African American studies at Yale University in 1985.  In 1988 she began teaching at Oberlin College in Ohio.  In 1989, she published Talking Back: Thinking Feminist, Thinking Black, which focused on the impact of white imperialist, patriarchal domination in daily life.  In 1994, she accepted the prestigious Distinguished Lecturer of English Literature post at the City College of New York.

A passionate scholar, hooks is among the leading public intellectuals of her generation.  She has published over 30 books and scholarly articles, in topics such as masculinity and patriarchy, self-help and engaged pedagogy, feminist consciousness and community creation, and representation and politics.

Do you find this information helpful? A small donation would help us keep this accessible to all. Forego a bottle of soda and donate its cost to us for the information you just learned, and feel good about helping to make it available to everyone!

Cite this article in APA format:

Source of the author’s information:

This Skyrim mod restores Winterhold to its former glory, with new buildings and a spooky mine