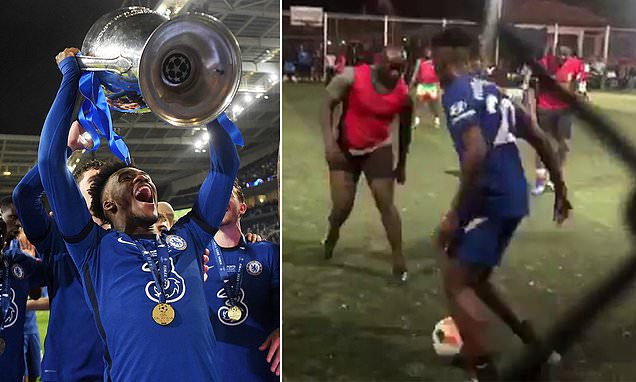 By Max Mathews For Mailonline

Callum Hudson-Odoi has demonstrated his incredible footwork in a game of cage football in Ghana less than a week after Chelsea won the Champions League.

The Blues midfielder was an unused substitute at the Estadio do Dragao in Porto on Saturday May 29, as Thomas Tuchel‘s side edged past Manchester City 1-0 to win the European showpiece.

And the winger, who played seven matches and scored twice on the continental stage this season, was shown displaying his silky skills and mesmeric close control in a casual cage match just six days later.

During the video, the 20-year-old was shown terrorising his marker with several stepovers

In the video, the

England international is shown terrorising his marker with several step-overs and Ronaldinho’s famous ‘flip-flap’ move, while wearing his Chelsea kit.

The Twitter user captioned it: ‘Loving these videos of Cal enjoying himself in,’ followed by a Ghana flag and a blue heart emoji, and also tweeted a follow-up video of Hudson-Odoi cleverly back-heeling the ball to a team-mate.

Hudson-Odoi received three senior England caps in 2019, playing regularly throughout the country’s age-grade sides, and is of Ghanaian descent.

His father Bismark Odoi played for Ghanaian side Hearts of Oak, and his elder brother Bradley Hudson-Odoi – a retired former non-League striker – was born in Accra, the capital of the country.

Hudson-Odoi recently posted a picture of him in Accra on Instagram, along with a video of him dancing, with the caption: ‘GHANAAAA OOO we backkk! Let’s enjoy.’

The 20-year-old made 37 appearances in all competitions this season, scoring five goals, but has been used more sparingly by Tuchel than his managerial predecessor, Frank Lampard, who the German replaced in January.