The Hourglass Sanatorium was made in 1973, but it wasn’t until 2014 — and thanks to Martin Scorsese — that many cinephiles came to know of the film.

A bird flies towards the gnarled branches of a leafless tree. It appears oddly lifeless. It doesn’t seem to be flying so much as suspended in the wintry-grey air. The camera pulls back, and we see the borders of a frame, which turns out to be the window of a train compartment. There are people inside. Their bodies keep shaking from the train’s movement. But like the bird, they seem lifeless — and the camera accentuates all this oddness with odder angles and compositions. (The ghostly music is odd, too: a siren-like sound piercing through other, undefinable nightmare-noises.)

After about four minutes, we finally get a man who isn’t sitting or lying down. And as he strides through compartments, we realise how dilapidated the train is. When he wakes up a passenger — Joseph, our protagonist — to announce that his station has arrived, we see there’s something odd about him, too. His eyes are glassy. He may be the cinema’s only blind ticket checker. Joseph disembarks, and trudges through snow to reach a building that appears to be even more dilapidated than the train. The stairs to the main door are blocked by trees. A portion of the parapet seems to have fallen off. There are cobwebs. There’s clutter. And the story begins.

The Hourglass Sanatorium was made in 1973 (and it was awarded the Jury Prize in that year’s Cannes Film Festival), but it wasn’t until 2014 — and thanks to Martin Scorsese — that many cinephiles came to know of the film and its director Wojciech Jerzy Has. Scorsese’s foundation remastered and screened 21 Polish masterpieces (made between 1957 and 1987) that he was hugely influenced by. It’s hard to see how this beyond-surreal movie might have “influenced” Scorsese. (Had Terry Gilliam or David Lynch claimed kinship to this film, we’d see the connection at once.) But why question gifts? A still from The Hourglass Sanatorium

Has does something art film-makers don’t usually do. Unlike, say, a Tarkovsky (think Stalker), he lays down the “rules” governing this bizarre universe very early. The building Joseph has journeyed to is a sanatorium. He’s come to see his father, but the doctor tells him the man is dead. Then again, maybe not. The doctor says, “The trick is that we moved back time. Time is late here by an interval I can’t possibly define…” So the father perhaps died during his transit to the sanatorium, but here, his death hasn’t occurred yet. The doctor says, “We reactivate time with all its possibilities.” One possibility may be death. Another could be recovery.

Almost immediately, we get an example of the fluidity of time in this strange place. After the doctor leaves, Joseph looks outside. And he sees himself enter the sanatorium. So the time inside the building is the “present”, and the time outside is the “past”? These micro-“rules”, however, the director doesn’t let out. And the easiest choice with The Hourglass Sanatorium is to surrender to the flow, and not wonder why — for instance — the blind ticket checker from the train has reappeared, and is now

being borne along on a makeshift palanquin. Or why the landscape suddenly contains… elephants.

The film is adapted from the works of the Polish Jewish author Bruno Schulz. Asked whether he would be able to accurately capture the wonder of his childhood, Schulz wrote that events are “merely trying to occur, they are checking whether the ground of reality can carry them… (And if they) lose a thing or two in their attempts at incarnation, then soon, jealously, retrieve their possessions… As a result, white spots appear in our biography — scented stigmata, the faded silvery imprints of the bare feet of angels, scattered footmarks on our nights and days — while the fullness of life waxes, incessantly supplements itself, and towers over us in wonder after wonder.” 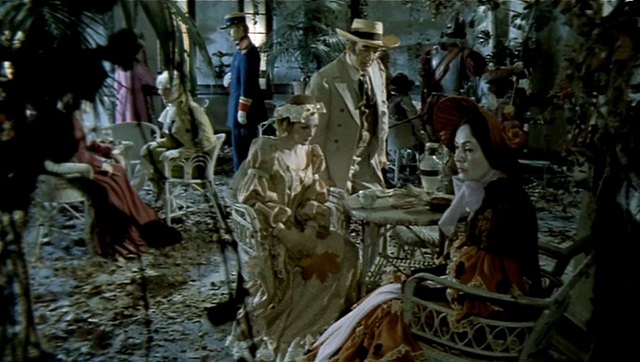 A still from The Hourglass Sanatorium

The director appears to have skillfully translated the fever-dream prose — Schulz’s imagined world — into fever-dream visuals. (In other words, the visuals, too, “are checking whether the ground of reality can carry them”.) These worlds and visuals (the cinematography and production design are stunning) are, in a way, enough to enjoy the movie. Listen to a  daughter talking about her mother. “She’s inhabited by ghosts, phantoms, larvae and chrysalises. Helpless and naive, she takes them into her dream and sleeps with them. She wakes up half-conscious at dawn and remembers nothing. That’s why she is so sad. ” It sounds like Marquez.

But how much of this can be “understood” by a non-Polish viewer — or perhaps, even a modern-day Polish film viewer, distanced from film history as well as world history? But at least one thing is certain. All this hallucinatory, Fellini-esque carnival imagery is rooted in tragedy. Schulz was shot dead by a Gestapo officer in 1942, for venturing outside the Jewish ghetto and into the Aryan quarter. Maybe, like in Hey Ram, the madness of a period in Schulz’s lifetime is recreated as a movie that itself seems “unhinged”.

The presence of Death, unsurprisingly, is felt throughout The Hourglass Sanatorium. (In Polish, apparently, the “hourglass” of the title refers to both a timepiece and an obituary notice.) At one point, Joseph finds himself in a graveyard. At another point, he enters a room filled with immobile people. A voice says, “They only seem dead. They don’t have to breathe for a longer period.” Who are these people? One of them is the anarchist Luccheni, assassin of the Empress Elizabeth. One of them is Bismarck. Other name-drops include the likes of Archduke Maximilian, Napoleon III… Later, Joseph comments, “Things went so far that I got involved with the dynastic affairs of great monarchs.” And that’s how the director wanted it. In an interview, Has said, “I reject matters, ideas, themes only significant for the present day.  Art film dies in an atmosphere of fascination with the present.”