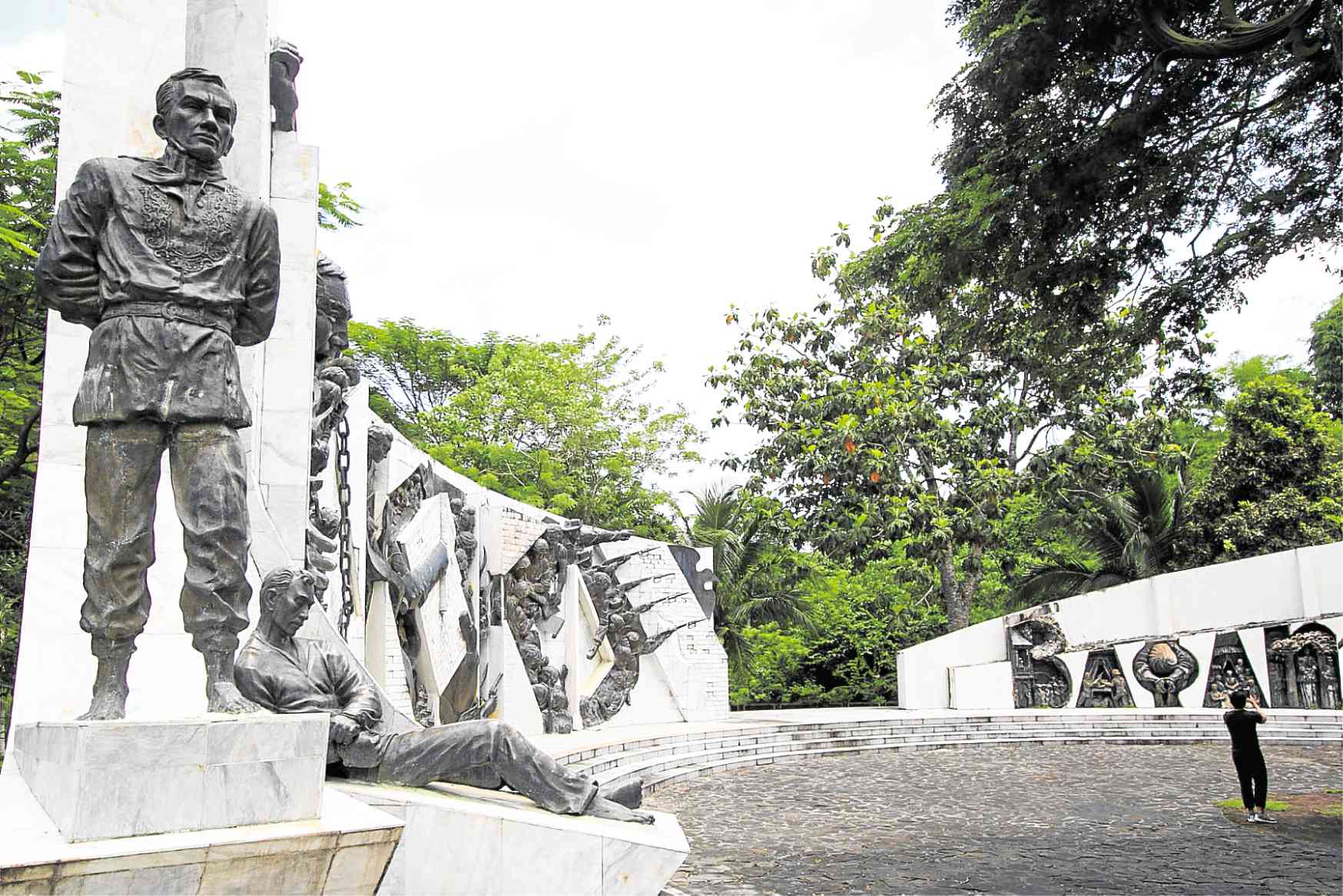 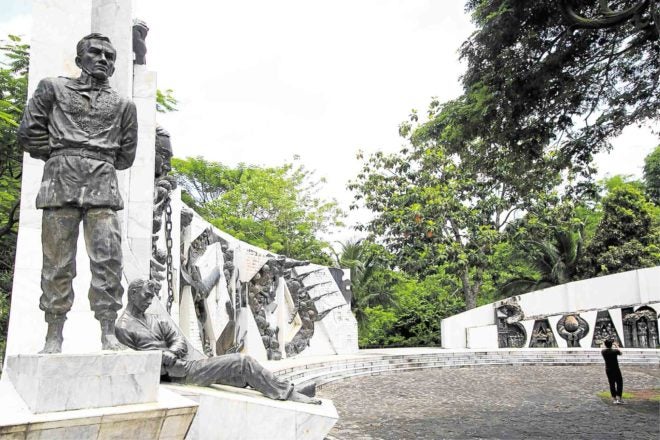 Katipunan Supremo Andrés Bonifacio and brother Procopio as depicted in heroic sculptures by Toym Imao, at their execution site on the foothills of Mt. Nagpatong in Pinagsanhan, Maragondon —photos by ALEXIS CORPUZ

As much as Caviteños are inordinately proud of their role in the Philippine Revolution, they’re also often reviled, and probably misunderstood, for the execution of Katipunan founder Andrés Bonifacio by men of General Emilio Aguinaldo.

Apparently the downfall of Bonifacio was the Machiavellian machination of the Cavite élite, not necessarily by popular clamor.

Whatever the judgment of history, this province has rightly earned its renown as an important historical place, as manifested by the innumerable historical markers, shrines and monuments dotting its landscape. 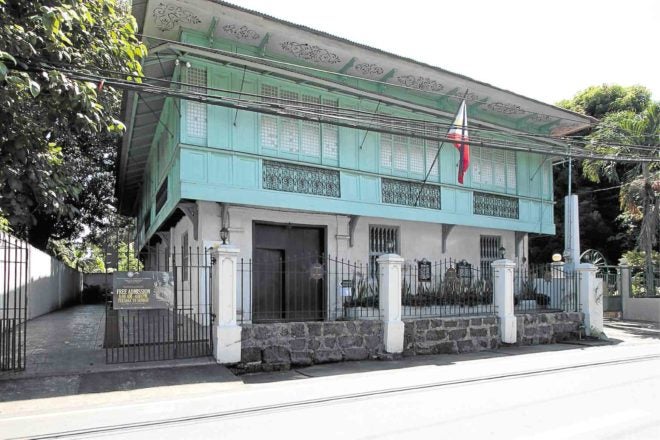 Aside from the Aguinaldo National Shrine, where Philippine independence was declared and the flag waved from its window on June 12, 1898, there is the Baldomero Aguinaldo Shrine in Binakayan, Kawit.

It is not as grandiose or ornate as his cousin Emilio’s mansion in the town proper but it contains one important artifact: a brass replica of the Tejeros Convention Hall, where one of the tragedies of the Revolution unfolded. The original structure has long been in ruins and it’s only through this miniature that we can imagine its architectural splendor. 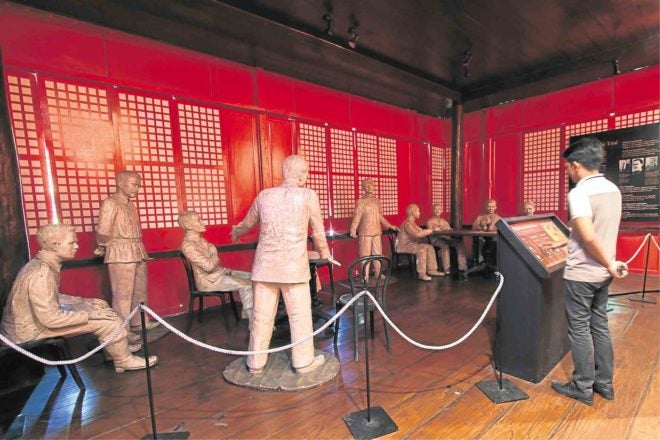 Tableau vivant depicts court-martial trial of the Bonifacio brothers at the salon of the Teodorico Reyes House. 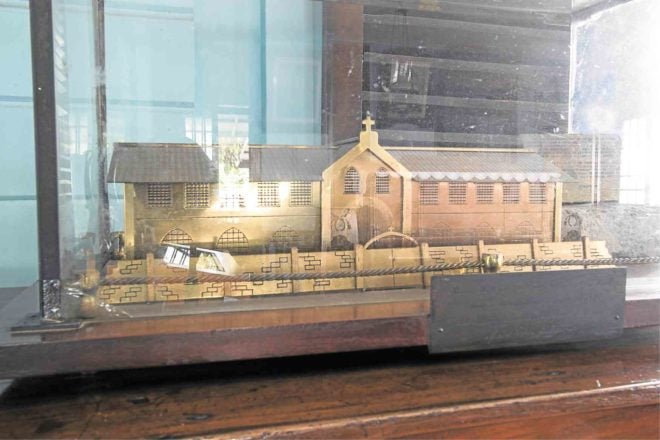 Brass replica of the Tejeros Convention Hall, where one of the tragedies of the Revolution unfolded

In the province’s de jure capital is the sprawling Imus Heritage Park commemorating the Battle of Alapan on May 28, 1898, which marked Aguinaldo’s first victory and started the Revolution in the province.

It was here where the flag was first unfurled, earning Imus the title Flag Capital of the Philippines. Every May 28, National Flag Day is celebrated in the park’s Dambana ng Pambansang Watawat, where a giant flag waves on a 90-foot pole. Flags are displayed in the city streets all year round.

The exact site of the battle is said to be what is now Alapan Elementary School. Here still stands the original monument depicting Mother Philippines waving the flag.

Another crucial event, the Battle of Imus Bridge, has been memorialized at a curve of the highway with life-size group sculptures depicting revolutionaries led by Col. José Tagle.

A grander and older shrine is the Imus Cathedral, or the Cathedral of Our Lady of the Pillar. This is the seat of the diocese; Luis Antonio Cardinal Tagle once served as its parish priest. 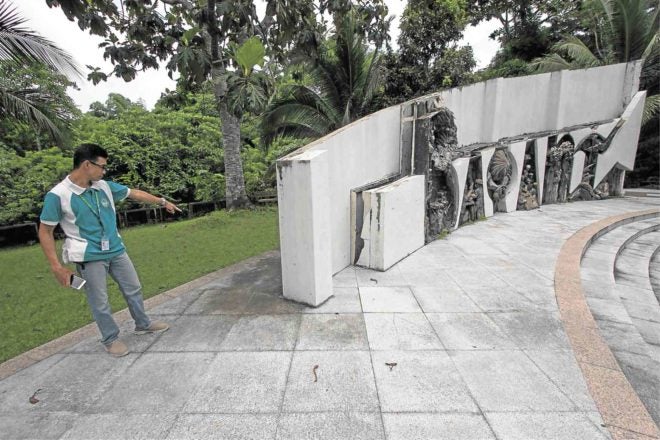 The original church was built in 1616, the present structure in 1779. The image of the Virgen del Pilar enthroned on the main altar was brought to the country in 1623 by Augustinian Recollect friar Martin Lumbreras (beatified in 1989).

In Bacoor, the gateway to Metro Manila, is the more historic Church of St. Michael the Archangel.

The original church of bamboo, straw and nipa was constructed in 1669. The present structure, of adobe and tegula (blocks of weathered stone), the huge boulders bonded by the white of thousands of duck eggs, was built in the mid-19th century during the 48-year term as cura párroco of Fr. Mariano Gomez (of Gomburza fame).

Annex to the church grounds is Plaza de Padre Mariano A. Gomez, congested with vendors and tricycles. 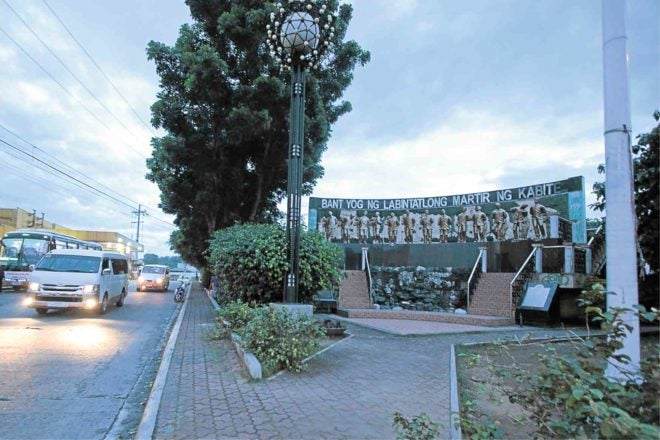 Monument to the 13 Martyrs of Cavite at a busy intersection 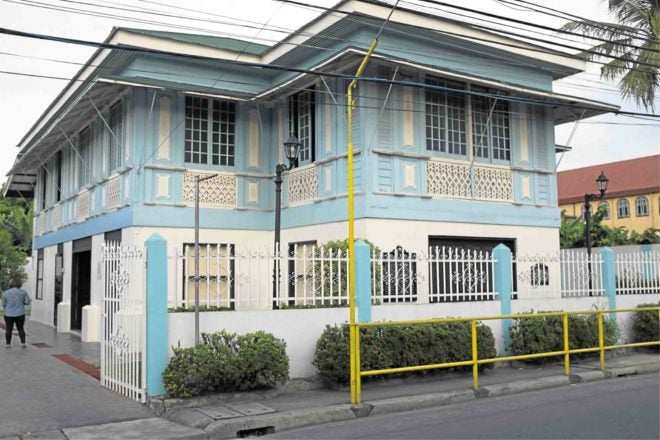 Another historic structure in Bacoor is the mansion popularly called Bahay na Tisa (or “brick house”). Originally the residence of Juan Cuevas and Candida Chavez, it is regarded as the

first Malacañang of the republic, as Aguinaldo turned it into the headquarters of his revolutionary government and stayed here for three months.

The Battle of Zapote Bridge, the second-biggest battle of the Philippine-American War, is memorialized with marker and monuments on the bridge bordering Bacoor and Las Piñas.

For such a small bridge, it is cluttered with monuments—three, with two of them crowded with heroic figures. It is now a footbridge over a garbage-choked river, a bigger one for vehicles built parallel to it.

In Maragondon, one of Cavite’s most historic towns, is the Bonifacio Trial House, or Museo ng Paglilitis kay Andrés Bonifacio. A bahay na bato built by Teodorico Reyes in 1889, it has been declared a National Historical Landmark.

It has five galleries, each reliving a timeline of the Revolution, which, for visitors, makes for a moving experience.

The fourth gallery contains a life-size tableau vivant of the court-martial trial of Bonifacio and his brother Procopio. As they immerse themselves in 15 minutes of light-and-sound presentation, a group of women visitors would wail or harrumph like a Greek chorus. 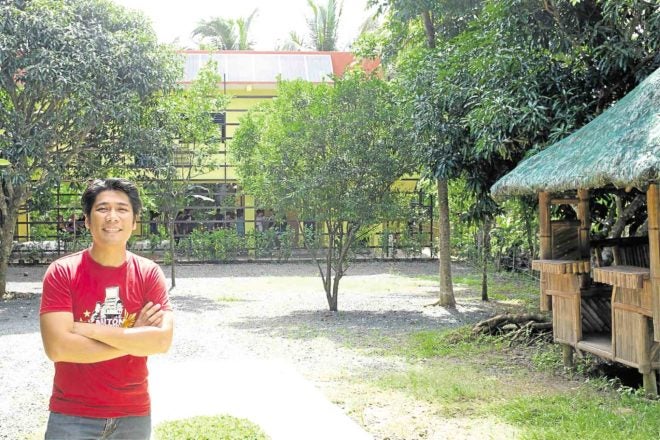 Efren Peñaflorida Jr. in front of his model school EcoDemya
in Amadeo town

The fifth gallery showcases the anguish of Oryang, Bonifacio’s widow.

Farther into the interior of Maragondon, in Pinagsanhan on the foothills of Mt. Nagpatong, is the Bonifacio Shrine, the site where the Bonifacio brothers are said to have been executed.

It is a beautifully designed park on eight hectares of land with a monument of heroic sculptures by Toym Imao. The caretaker can point to visitors the exact spot where the supposed bones of Bonifacio had been unearthed.

This is an exceptional place, but not easily accessible to visitors, thus has an air of neglect about it.

The town’s latest tourist attraction is the Maragondon Stone Carvings, popularly known as Ukit-Ukit. It is a set of nine religious images graven on rock walls by brothers Valentin and Oscar Suarez. It is accessible by tricycle on the riverside of Brgy. Caingin.

Trece Martires, the province’s de facto capital, is relatively young (built on lands of Indang, Gen. Trias and Tanza), yet it already has an outstanding historical landmark—the 13 Martyrs Monument.

Those Caviteños were executed by musketry in Bagumbayan on Sept. 12, 1896, but since the city was named after them, the monument was installed at its busy intersection, beside a mall.

Even a restaurant like Republic of Cavite thrives on reflected glory. Standing near the monument and across the City Hall, it is a replica of the Aguinaldo Shrine of Kawit.

In Amadeo is a monument to a modern-day hero, EcoDemya, the school Efren Peñaflorida Jr. built. It is a two-story, eco-friendly, brightly painted structure on a 3,000-sq-m lot in Brgy. Halang, donated by a Japanese group of companies.

This is an open high school for streetchildren with six classrooms. There are five bahay kubo (nipa huts) that serve as study areas and residences for the kids. They source energy through solar panel and spring water from Balete Falls. They grow organic vegetables, too.

A teacher and social worker born in Cavite City, Peñaflorida started a revolution in the field of education with his kariton (pushcart) program in 2007, recreating school settings in unconventional locations such as cemeteries and garbage dumps, thereby bringing education to steetchildren as alternative to street gangs. In 2009, CNN named him Hero of the Year.

Here is another Caviteño revolutionary that future generations will remember.