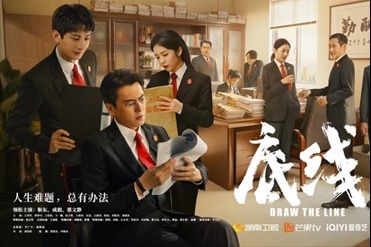 The popular TV series Draw the Line has bolstered public interest in how the rule of law is developing and how courts work in China since its first episode aired on Sept 19.

The show, broadcast online and on Hunan Television, reveals how the country’s judicial reforms have continued to unfold through vivid depictions of actual cases.

The 40-episode series, created with guidance from the Supreme People’s Court, the country’s top court, focuses on various hot legal issues including those concerning livestreaming, sexual harassment, justified self-defense and the Civil Code. It educates audiences about the law by telling the stories about judges and cases in grassroots-level courts.

For example, one case depicted in the series involves a man who hid an illness from his fiancee before they married. She found out and successfully sued to have the marriage annulled in line with the Civil Code.

The series is directed by Liu Guotong and stars Jin Dong, Cheng Yi and Cai Wenjing.

As of Oct 7, episodes of the show had been watched nearly 1.2 billion times on Hunan Television-affiliated livestreaming site Mango TV and over 1.6 billion times on Migu, a China Mobile subsidiary that provides digital content and related services, according to statistics from the Supreme People’s Court.

That day, data from box-office tracker Maoyan showed the drama was one of the most discussed topics across Chinese social media platforms. Posts tagged “TV series, Draw the Line” have been viewed more than 2.8 billion times on Sina Weibo, China’s Twitter-like platform, with 7.1 million users discussing it. Some clips from the drama have also aroused interest on major video-sharing platforms Douyin and Kuaishou.

A Weibo user with the online handle Biesuisuiniannianle said: “I seldom watched dramas about the rule of law, but this TV series attracted me with its clear plots and good performances. I learned how courts work and how judges deal with cases.”

Another user with the handle Yiqijiayouya said, “It tells court stories and explains legal issues in a way that can be easily understood.”

also gave the series a thumbs-up, saying, “The meaning of the series is to get more people to respect the law and understand that what judges do is serve as the voice of justice.”

Workers in the judicial system have also praised the show.

Beijing Xicheng District People’s Court judge Shu Rui said that he and colleagues talked about Draw the Line and agreed it was like watching themselves at work.

“The drama doesn’t caricature judges, lawyers or litigants. Instead, every role has multiple identities. It’s close to people’s daily lives, so everyone can find themselves in this TV series,” he said.

“It vividly conveys to the public how courts work and what difficulties judges face, which will help people better understand our jobs.”

Shu added that previous TV shows about the judicial system often used too much technical terminology and employed outlandish plots.

“But this one is more accessible to viewers. Yet, at the same time, it reflects true professional conduct,” he said.

A lot of work went into creating the series, which was conceived in 2019. More than 200 staff at over 60 courts were interviewed over a period of 90 days in late 2020, and the scripts for the 40 episodes were revised about 20 times. The episodes were filmed between February and May this year in Changsha, Hunan.

Shu admitted the show still has some issues but is confident they can be overcome.

“Some of my friends without backgrounds in law said they have gained a better understanding of my busy job after watching the series. But some of my peers still complain that the number of cases they deal with in reality is much more than is shown in the drama,” the judge said.

“There is a perception gap between ordinary citizens and judges that may not be quickly narrowed by one TV program. But I believe it’ll be reduced if both sides make greater efforts and increase communication.”

Derek Warfield – Liedtext: The Glory of the Story of the Men Who Wore the Gray