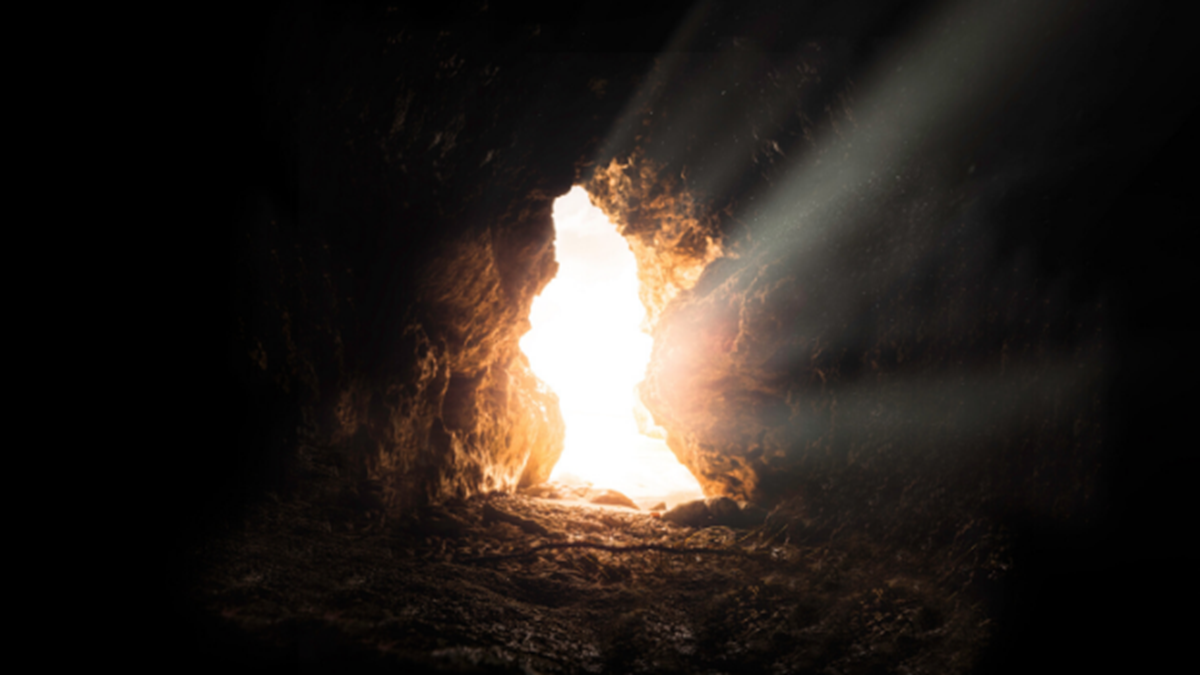 During the current “shelter in place,” I’ve found myself catching up on seasons of Criminal Minds. I admit, it’s a pretty dark show as it is about the FBI’s Behavioral Analysis Unit (BAU), which is tasked with finding and capturing serial killers.

Think about the ‘dark’ plot of the show Criminal Minds. Serial killers are on the loose, wreaking havoc, and the local police or sheriff departments aren’t equipped to hunt down such dark criminals. When they realize they are at their wits end, they call the BAU (Behavior Analysis Unit), which immediately begins analyzing the crime scene photos.

The BAU is the good news for local and state law enforcements dealing with dark criminals. The agents of the BAU are trained to shine light where darkness resides. The more light they shine, the more they push back the darkness, and the sooner they can bring peace in chaos. In short, when the BAU shows up, hope arrives.

I got to thinking how the plot of Criminal Minds resembles the Easter story.

The world is in a state of chaos and darkness as the serial killer of sin is on the loose. And the world is looking for an answer of who can put away sin once and for all and restore order, peace, and light.

To put away the serial killer of sin, the world needs to call Jesus.

What Should Have Been, Isn’t

The Apostle Paul writes in 2 Corinthians 4,

For we are not proclaiming ourselves but Jesus Christ as Lord, and ourselves as your servants for Jesus’s sake. For God who said, “Let light shine out of darkness,” has shone in our hearts to give the light of the knowledge of God’s glory in the face of Jesus Christ. (vv. 5–6)

I love how Paul connects the good news (Jesus Christ) with the Genesis narrative. Rewinding all the way back to the beginning of creation, we know that after God created the heavens and the earth (Gen. 1:1), the earth sat in a state of chaos. The author notes the following description: “The earth was formless and empty, darkness covered the surface of the watery depths….”

Sidney Greidanus describes the scene this way: “It is pitch black; no light at all. All that exists is a formless, empty, dark, deep ocean. Nothing can grow or develop on this earth. It is utter chaos.”[1]

In a state of utter chaos, the Spirit of God begins to move, and in the very next verse we read those famous, yet powerful, words, “Then God said, ‘Let there be light’….”

When I read those words, I think to myself what it must have been like—that in a flicking of an eye, darkness became light. Hope had dawned, life was beginning to unfold, and at the end of six

days it would be deemed “very good.”

Now that you have what you think is “very good,” is that our reality today? Probably not. This means something went wrong.

The Serial Killer Sin and the Good News of a Savior

According to the Scriptures, we believe sin entered the “very good” world and wreaked havoc. Sin can be defined as “everything that does not [derive] from faith [in God]” (Rom. 14:23). To give a little more definition to sin, let me borrow from John Piper who defines sin as, “any feeling or thought or speech or action that comes from a heart that does not treasure God over all other things.”[2]

When Adam and Eve sinned, the order God had brought in creation began to unravel. Sin tainted; sin cursed God’s good creation—especially the crescendo of his creation, humanity. The created order—as well as humanity—lives in this fallen, broken, and chaotic state.

Every religion and philosophy have tried to make sense of why the world is the way it is and how it can (or will) be made right. They are in a sense looking for a BAU to help bring clarity, resolve, and thus, calm.

Here’s where the Bible helps tremendously. The Apostle Paul tells us, according to the work of God, Jesus Christ is THE WAY God will redeem humanity, restore the created order, and reverse the curse of sin.

God, in a similar fashion to how he began the unfolding of creation by speaking light into darkness, sent THE Logos (The Word made flesh) who also is THE Light of the World on mission to begin the unfolding of the NEW CREATION.

In other words, God sent Jesus to stop the serial killer of sin (and death) in its tracks.

But how did Jesus accomplish this? To birth a new creation, Jesus died for (and in the place of) the old creation and was raised as the first fruits of the new creation. Paul defines this as the gospel. In writing to believers in Corinth he explains,

Now I want to make clear for you, brothers and sisters, the gospel I preached to you, which you received, on which you have taken your stand and by which you are being saved, if you hold to the message I preached to you…. For I passed on to you as most important what I also received: that Christ died for our sins according to the Scriptures, that he was buried, that he was raised on the third day according to the Scriptures, and that he appeared to Cephas, then to the Twelve.

The word gospel (or good news) is an interesting word, especially in antiquity. Michael Horton notes, “In its secular Greek context, euangelion (good news) was normally used for the word of victory on the battlefield brought by a herald from the front lines.”[3]

The preaching of the gospel (of Jesus Christ) is about God sending his messengers—ambassadors of new creation (2 Cor. 5)—to declare to those who may not have heard, who are living in a creational and personal environment of darkness, chaos, brokenness, hopelessness, and fear, that Jesus has secured victory over such for the world and for those who trust him.

The Church as the BAU for the World

Jesus didn’t come to profile the serial killer of sin (and sinners), he came to die for sin (and sinners)—once and for all—and thereby inaugurate God’s Kingdom and begin the process of New Creation. Creation knows this as Paul writes,

For the creation was subjected to futility—not willingly, but because of him who subjected it—in the hope that the creation itself will also be set free from the bondage to decay into the glorious freedom of God’s children. For we know that the whole creation has been groaning together with labor pains until now. (Rom. 8:20–22)

While creation knows what Jesus has accomplished through his death, burial, and resurrection, all of the world doesn’t know. But the world needs to know; the world must know that it has an advocate, a Savior, and King who loves them and has acted on behalf of God’s glory and their good.

This is where God’s people come in. Those who have trusted and placed their faith and hope in Jesus as Savior and Lord (King), have become part of God’s people, as God has forgiven them of their sin, imputed them with Christ’s life, empowered them with the Holy Spirit, and sent them back into the world.

They now act as sort of a BAU as they understand why the world is the way it is, why there is pain and suffering in the world, why people behave the way they do, and where people can attune their hearts and lives to find hope, light, life, and peace.

As the people of God profile sin and sinners (of which they are)—trying to give a worldview and framework for understanding a fallen world comprised of sinful people—they also pattern their life after their Savior. As such they are people who embody what it means to be reconciled to God, reconciled to others, and reconciled to what we do in the world and how we do it.

May this be an Easter for the Ages

There are facets of this world that embody the goodness and beauty of God’s creation. But we all know—especially in a season where a deadly virus is wreaking havoc on and in the world—that we live in a dark, chaotic, and broken world. Thus, we intuitively know that what is shouldn’t be.

Given what is transpiring in the world today, many in the culture are now inviting the church in to help them “profile” the world and their life, hoping that what they hear and find gives them order, calm, and peace.

May this Easter be one for the ages in the annals of church history as pastors and believers profile the world of sin and sinners and proclaim a Savior and King who entered into time and space, took on the sin of the world, died, was buried, but three days later rose again victoriously—thereby defeating sin and death and bringing about the dawn of new creation. To God be the glory!

Josh Laxton currently serves as the Assistant Director of the Billy Graham Center, Lausanne North American Coordinator at Wheaton College, and a co-host of the podcast Living in the Land of Oz. He has a Ph.D. in North American Missiology from Southeastern Baptist Theological Seminary.

[2] John Piper, “What is Sin? The Essence and Root of All Sinning” a message preached at a 2015 Conference for Pastors, https://www.desiringgod.org/messages/what-is-sin-the-essence-and-root-of-all-sinning.

The Exchange
(Weekly)The Exchange newsletter is a weekly digest of coverage, research, and perspective from Ed Stetzer.

The Exchange is a part of CT’s
Blog Forum. Support the work of CT.
Subscribe and get one year free.
The views of the blogger do not necessarily reflect those of Christianity Today.