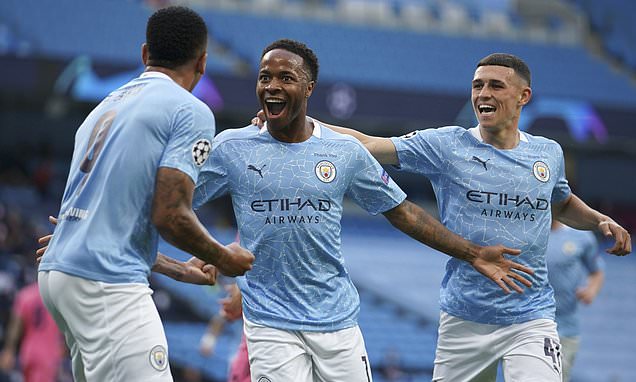 DANNY MURPHY: Manchester City’s anger and frustration at surrendering the title to Liverpool can drive them to Champions League glory

By Danny Murphy For The Mail On Sunday

Manchester City played like a team possessed against Real Madrid – and I mean that in a good way.

It came from an anger and frustration borne out of losing the Premier League title to Liverpool and being knocked out of the FA Cup by Arsenal.

If they keep that feeling and intensity for the Champions League finals in Portugal, it’s going to take something special to stop them because even teams of the highest quality can’t match Pep Guardiola’s team for technical ability and energy.

That comes from the manager. Against Real, I could hear the constant orders to press and squeeze from the sidelines and it was an emphatic statement from City.

There is no reason they can’t now take that on to the next stage. I think there is a sense of ‘we will show you’ about them. Liverpool have received great praise for their dominance this season and it’s given City a kick up the backside they might have needed.

Maybe Pep gave them a rocket after their disappointing loss to Arsenal at Wembley. At the very least, the players would have watched the game back and thought to each other; ‘That’s not us’. It has spurred them on.

Then, there is the holy grail of the Champions League. Players and managers will deny some competitions are more important than others, and maybe they believe it at the time.

But looking back on my career, the trophies you haven’t won are the ones that fire you up most. In 2001 after we won a cup treble, I

admit the following season I was more pumped up for the league.

Liverpool hadn’t won the Premier League for 30 years and that hunger shone through. City have never been champions of Europe, none of their player have won it, so I do think it gives extra motivation.

Other things are in City’s favour too. Every team left is a very good but privately the players will know they should beat Lyon in the quarter-finals if they play to their best.

City would be even more confident over two legs but at least a one-off at a neutral venue without fans means the crowd can’t have an influence, as it’s done at Anfield in the past.

The temperatures will be hot but City are technically good enough to slow the tempo down and keep the ball when they need to. And they are fit enough to speed things up if they don’t want to get lulled into a pure possession game that would suit a Barcelona for example.

These City players are peaking at the right time. I’d say Kevin de Bruyne’s performance went up against Real except he’s been brilliant all season. Ederson was faultless. The work ethic of Raheem Sterling and Gabriel Jesus was incredible.

Jesus has a point to prove, can he fill the boots of Sergio Aguero? He is tireless and Sterling relentless.

City have players the envy of any of their European rivals. De Bruyne and Sterling are among the best in the world and I would add Aymeric Laporte in there. He has become crucial for City, they are clearly much stronger defensively with him.

Kyle Walker deserves a mention too. He is so strong going forward, I think it’s lost how good he is defensively. He has switched off on occasions in the past but only rarely. He has been at City a long time and this is the one trophy he’s missing.