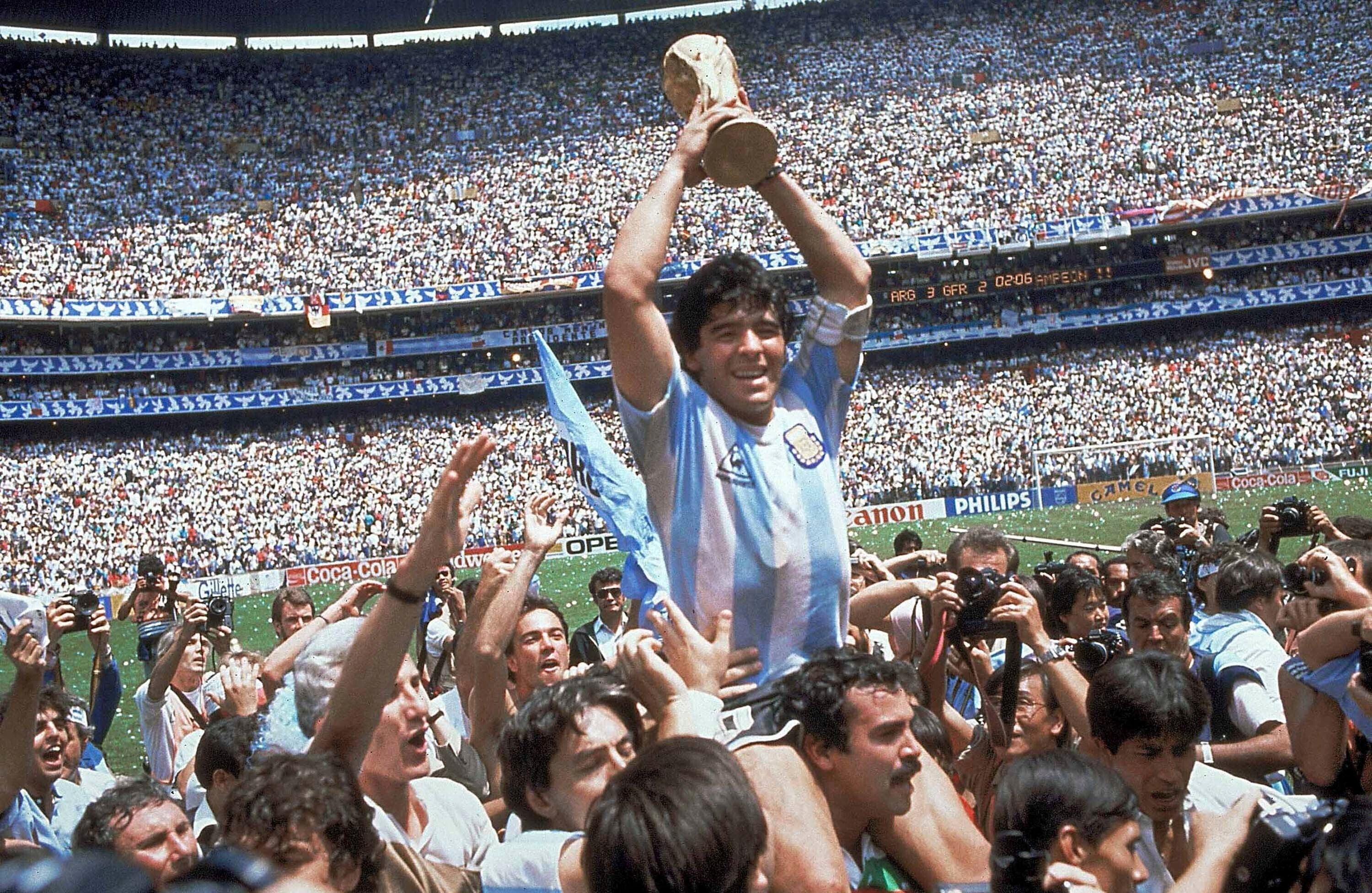 iego Armando Maradona was loathed by a nation for the ‘Hand of God’ in Mexico City but adored by the world for his moment of genius just four minutes later.

The combustible Argentinian, who has died at the age of 60, was without doubt one of the greatest football players in history.

Maradona – a fiery, indomitable personality, a man so drastically different in his world view from Brazil’s beloved Pele – was an unstoppable force on his course to reaching the very top of the game.

But, after winning the World Cup in 1986, his fall from grace was swift, bizarre and, like the man himself, totally unpredictable.

Born on October 30, 1960, the son of a boatman from Villa Fiorito, Buenos Aires, he kicked off his prolific career with Argentinos Juniors’ youth team, ‘Los Cebollitas’.

And he soon started planning what would be his immortalising performance at the Azteca, in the 1986 World Cup quarter-final win over England.

In his autobiography Maradona gloated about first getting away with the ‘Hand of God’ – “You’re trying to reach the ball and the hand moves independently,” he wrote – in the early seventies. 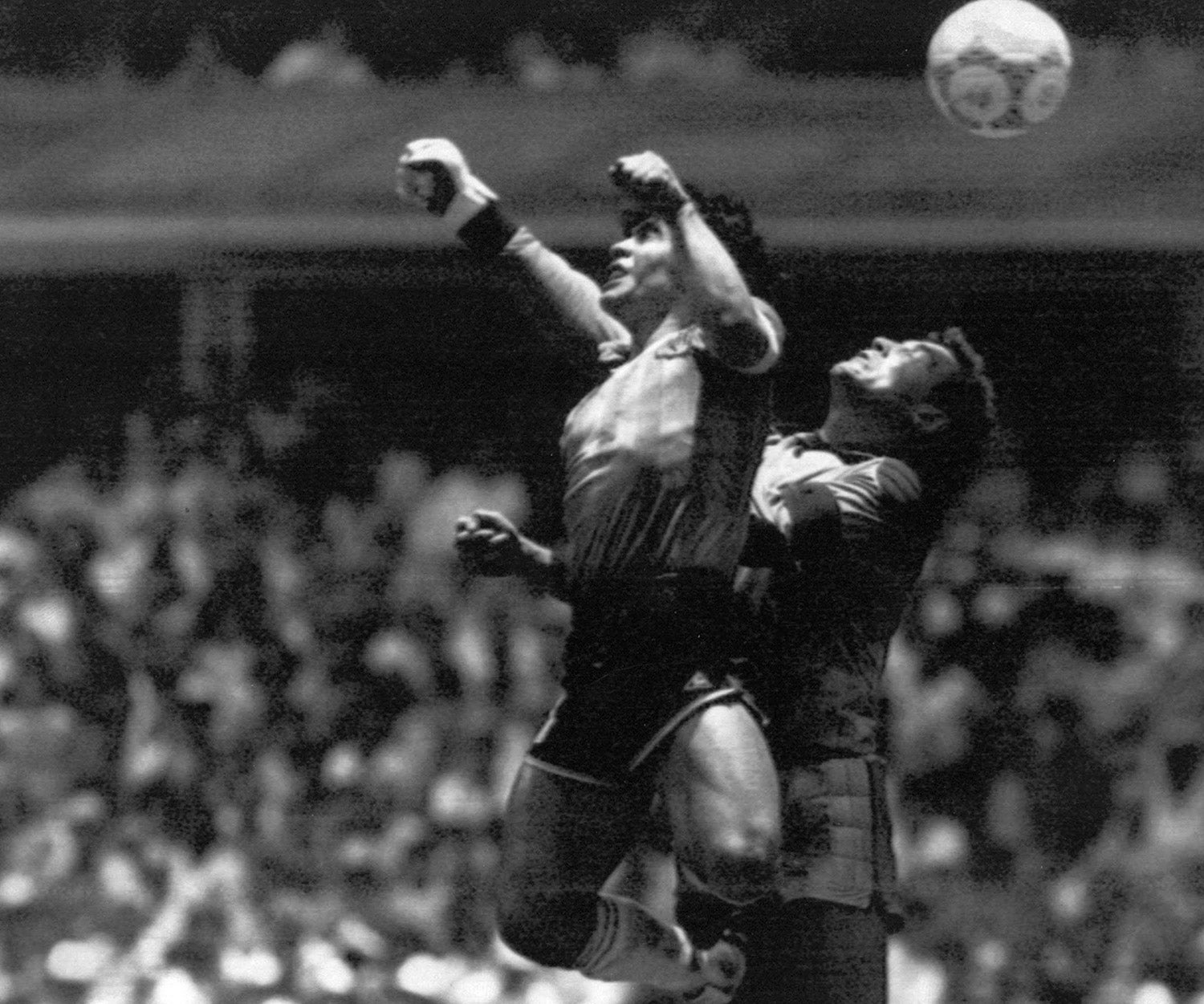 Later in the decade a referee warned him not to try it again, but the ever-rebellious ‘Pibe de Oro’, or Golden Boy, who had 100 goals under his belt by the age of 19, could not make that promise.

He tried over and over to pull off what would become his famous second goal: with Argentinos, then at Boca Juniors after manipulating their city rivals River Plate to get a better deal at La Bombonera, and then repeatedly with Argentina.

When the weaving, inventive and lethal number 10 played at Wembley in May 1980, Ray Clemence stood firm after Maradona had dribbled past the entire England defence with his sights trained on goal.

Recalling how his little brother Hugo had later pulled him up on his mistake of blasting wide, Maradona said: “At the World Cup in Mexico I remembered his advice.”

Maradona in action at the 1986 World Cup

The Hand of God

Maradona at the 1994 World Cup

Maradona lining up for Argentina in 1985

The legend playing for Napoli vs Hamburg in 1987

Ronaldo and Maradona: Two legends of the game

Maradona playing for Tottenham in Ossie Ardiles’ testimonial back in 1986

Catch him if you can: Maradona vs England at the 1986 World Cup

Maradona wins Fifa’s ‘Goal of the Century’ in 2002

Maradona greeted by Pele in 1987

Maradona scoring his ‘Goal of the Century’ vs England in 1986

World Cup glory for Maradona in 1986

The infamous ‘Hand of God’ goal against England in 1986

Spurred on by the ‘bronca’ – his own made-up word for angry resentment – caused by his omission from the 1978 squad and Argentina’s limp showing in Spain in 1982, Maradona was a man possessed in Mexico.

At 25 he was the Argentina captain

after replacing Daniel Passarella, who left mid-tournament officially due to illness and partly because he lost a battle of wills with his successor as skipper.

Maradona inspired the team to wins over South Korea, Bulgaria and Uruguay to set up a capital clash against England, with the recent bloodshed of the Falklands War adding an extra layer of tension.

In the 51st minute Steve Hodge’s poor attempt to deny Jorge Valdano saw the ball loop up to Maradona, who used his left fist to send it beyond the six-foot-one-inch Peter Shilton, finding the open goal.

“(Terry) Fenwick was the first one to appeal for a handball. Not because he’d seen it but because he could not understand how I could have jumped higher than the keeper,” said Maradona.

Despite the desperate cries of injustice and dismay at the time, Terry Butcher would hail Maradona’s utter brilliance in fooling England.

“I just couldn’t get near him – all I ever saw was his number 10,” said the former number six. “He had a low centre of gravity that shielded the ball. He also had a great leap for such a small man.”

No one could argue with the genius of the winner.

“It seems like a goal that you could dream of but never actually score. Now it’s become a legend,” said Maradona about the breathtaking individual effort that left the Three Lions reeling and everyone else drooling.

After bursting between Peter Beardsley and Peter Reid, Maradona shimmied past Butcher, dummied a pass to Valdano that fooled Fenwick and, with Shilton racing out, rounded the keeper before steering home the “goal of his life”.

Gary Lineker, who scored England’s consolation in that quarter-final defeat, said of the diminutive forward’s masterstroke: “The second goal that Maradona scored in Mexico was the best goal ever.

“That was the first time in my career that I almost applauded on the pitch something the opposition had done because it was a really good goal.”

Maradona would captain Argentina to another World Cup final in 1990, but injuries hampered his own performances and he wept on television after West Germany deposed his countrymen in Rome.

Down the road in Naples he was already a working-class hero, the firebrand who had transformed an average second-division Napoli side into the two-time champions of Italy by 1990.

The titles were “for the people, for the workers”, and Maradona took great pleasure in trumping the genteel Michel Platini of star-studded Juventus.

But Maradona’s personal demons – a cocaine problem, tax issues and alleged ties to crime syndicates – saw him tumble into disgrace and he was kicked out of the 1994 World Cup after a positive drugs test, his international career ending after 91 caps and 34 goals.

Months before he had fired an air gun at reporters, an action for which he received a suspended jail sentence and, despite a ceremonial return to Boca, by 1995 his playing career was all but over.

Soon ballooning in weight and marking his every public appearance with stranger and stranger behaviour, he surprisingly chose Fidel Castro’s Cuba as the retreat where we would kick his many habits.

He was for many a shock appointment as Argentina coach in 2008 but, despite a confrontational approach to media duties, he led the nation to the quarter-finals of the World Cup in South Africa, stepping down after their heavy 4-0 defeat to Germany. A number of short-lived managerial stints in the Middle East and South America followed.

Maradona is survived by his daughters Dalma and Gianinna, who was previously married to Sergio Aguero, son Diego and ex-wife Claudia Villafane.