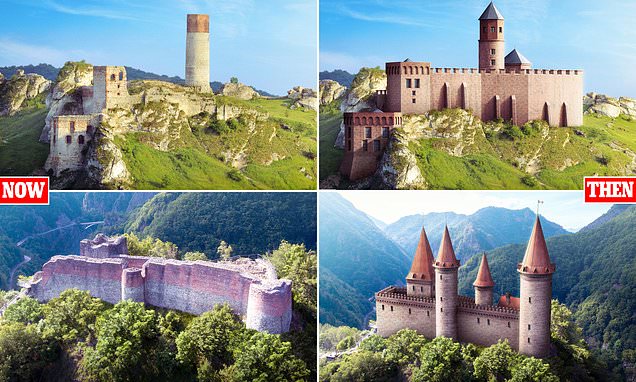 Seven of Europe’s most impressive ruined castles have been given an extreme makeover.

They have been ‘rebuilt’ by a team of designers and architects using the wonders of computer-generated imagery.

Samobor Castle in Croatia was built in the 12th century by the Czech king Otokar, before a procession of noble families took control through the centuries

From the initial Romantic-Gothic castle with a huge tower, late Gothic and Renaissance elements were added and at the end of the 17th century and the beginning of the 18th century Samobor became a Baroque-style castle

Sitting above the market town of Samobor itself, the castle dates back to the 13th century, but the official website notes that ‘from the initial Romantic-Gothic castle with a huge tower, it acquired through time the late Gothic and Renaissance forms and at the end of the 17th century and the beginning of the 18th century it became a Baroque style castle’.

Since 1902, the castle – after years of legal battles between noblemen and the townsfolk – is now owned by the  town itself.

After Richard’s death his successor, King John, eventually lost the château to Philip

This stunning French château is perched impressively above the River Seine.

The castle’s official website explains: ‘In the late 12th century, Richard the Lionheart, King of England – thanks to his Plantagenet roots – ordered the construction of a massive new castle here to guard his Norman possessions and the nearby Norman capital of Rouen from the powerful King of France, Philip II.’

But Philip would have the last laugh – after Richard’s death in 1199, his successor King John soon lost the castle to his French rival.

Dunnottar Castle is situated just south of Aberdeen, overlooking the North Sea. It was invaded by the Vikings in the ninth century, who left a bloody trail of chaos in their wake

Ancient Dunnottar Castle has a rich – and bloody – history.

According to its official website, the dramatic cliff-top fortress was invaded by Vikings in the ninth century, who killed King Donald II while they were there for good measure.

The site says that William Wallace captured the castle from the English in 1297 and it went on to welcome several key royals, including, 300 years later, Mary Queen of Scots.

On the banks of the River Corrib, near Galway city, sits 16th-century Menlo Castle, inhabited by the wealthy English Blake family

On the banks of the River Corrib, near Galway city, sits 16th-century Menlo Castle, inhabited by the wealthy English Blake family from 1569 and an ivy-clad building with a rich, painful and occasionally mysterious history.

The official website says that ‘a local midwife to the Blake family used to tell a story that while on a night journey to the castle she heard fairy music and saw the fairies dancing in a fairy ring in a nearby field’.

Modern times, meanwhile, brought tragedy – in 1910 a fire gutted the place killing Lord and Lady Blake’s daughter Eleanor, whose body was never found. The building has been a ruin ever since.

Ruined: The castle was badly damaged by warring Swedes in 1657

This formidable castle, located in the Kraków-Częstochowa Upland, was first mentioned in 1306.

It was extended in the mid-14th century, but badly damaged (and captured) by warring Swedes in 1657 – and never regained its majesty. In fact, in 1722, some of its brickwork was ripped out and used to build a church in Olsztyn.

Built 900 years ago in Slovakia, Spiš Castle takes up over four hectares of space and is one of the biggest castles in central Europe

The castle’s architecture has changed over the centuries, and in the 15th century it was transformed into a Gothic-style fortress

Built 900 years ago and covering more than four hectares, Spiš Castle is one of the largest castles in central Europe.

According to the castle’s official website, the ‘surrounding stone fortification protected the inner Romanesque palace from the Tartars during the invasion of the 13th century’.

Hollywood came calling in 1992 and 2007, when the movies Dragon Heart and The Last Legion were filmed there.

To get to this 13th-century castle perched high up in the Carpathian Mountains, you have to climb over 1,400 stairs

Poenari was once the home of the infamous Vlad the Impaler – the Romanian leader and folk hero who, it’s said, was the inspiration for Bram Stoker’s Dracula

To get to this grand ruin in the foothills of the Carpathian Mountains – which dates back to the 13th century – you have to climb over 1,400 concrete steps.

But that’s not the most culturally significant aspect of Poenari – from the 15th century onwards it was the home of the infamous Vlad the Impaler, said to be the inspiration for Bram Stoker’s Dracula.

Ghost hunters flock to the ruin, claiming that the historic place is haunted.

Little Hearts for His Glory: Packages