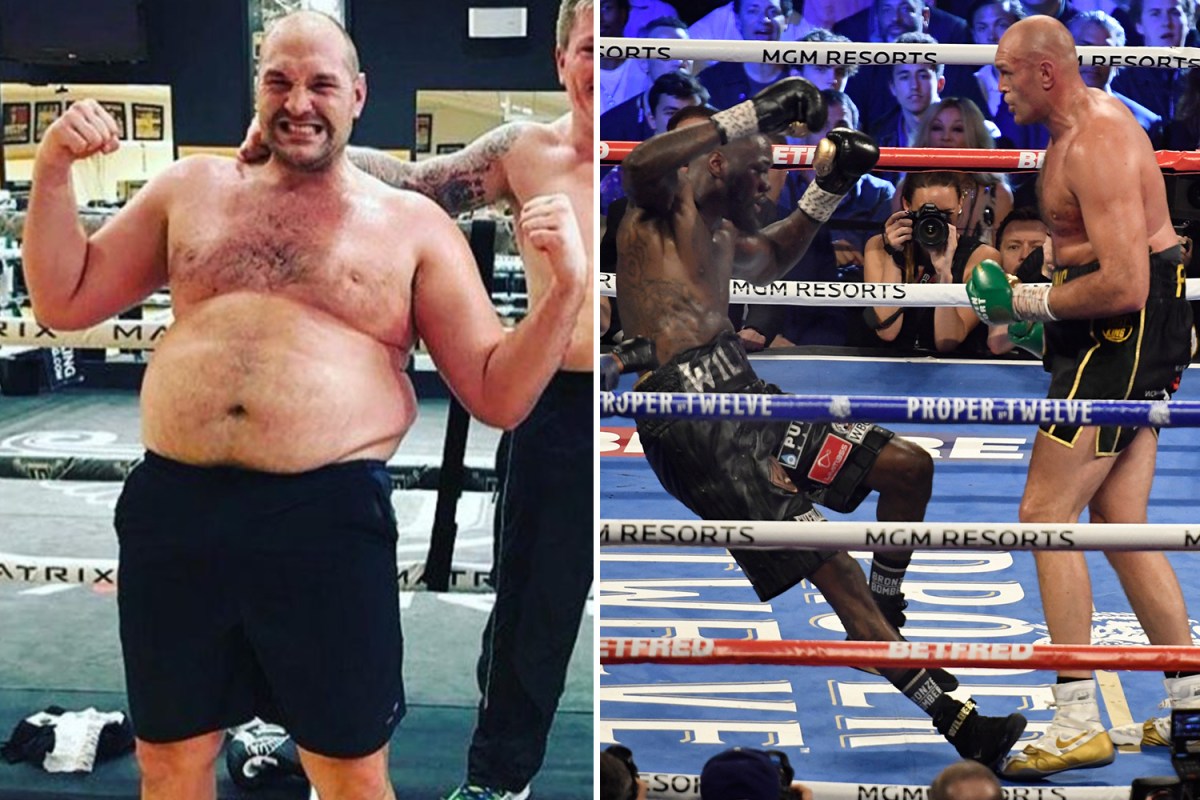 IT was probably the greatest ever performance by a British boxer on foreign soil.

And the manner of it was certainly the most surprising.

Tyson Fury has battled back after ballooning to 28stCredit: Refer to Caption

Tyson Fury, the master craftsman and sweet-science boffin of the heavyweight division, battering Deontay Wilder into submission inside seven rounds and claiming the WBC championship of the world.

A minority of experts claimed Fury would win.

None of them, except for the Gypsy King himself, believed he would win by a sustained and savage beating.

Wilder’s corner threw in the towel during a ferocious Fury onslaught in the seventh, their man already having been sent crashing to the canvas in the third and the fifth.

It was the American’s first defeat in 44 professional fights – 41 of them ending in knock-out victories.

Fury vs Wilder LATEST: All the reaction after Gypsy King brutally destroys American

But the 31-year-old Mancunian put on a show befitting the bright lights of Las Vegas, before, during and after a stunning fight.

Fury entered the ring in a crown on a throne aboard a sedan chair.

And after his demolition job he serenaded a British-dominated crowd with a rendition of American Pie.

He’s not got a bad voice either, this bloke.

To think that just three years ago, he was a washed-up 28-stone bum, banned for a failed drug test, and contemplating suicide.

Sport loves a redemption story but few can beat Fury’s. Especially after this his brutal masterpiece.

Wilder, 34, has the option of a trilogy fight with Fury later this year. He may not even want one after this fearful beating.

Their initial drawn encounter in Los Angeles almost 15 months ago had been an absolute belter – Fury climbing off the canvas in miraculous fashion in the final round to claim a draw, which ought to have been a victory given the way he’d out-boxed the American.

Fury catches Wilder again as the American struggles to stay in the fightCredit: Getty Images – Getty

So this was the most eagerly-anticipated world heavyweight title rematch of the 21st century – a classic clash of styles between two charismatic fighters, finally earning the sort of profile their contrasting skill sets have long since merited.

Sin City had been swarming with Fury supporters from the travelling community and beyond.

There had been a proper buzz about this great adult playground all day long, despite some biblical rain storms, and the support inside the MGM Grand Garden Arena was heavily weighted in Fury’s favour.

Their hero’s ring walk was an extraordinary affair – not that he walked very far.

Fury, wearing a crown and an ermine-trimmed red robe, was carried, enthroned, towards the war zone as he blew gloved kisses to his people to the tune of Patsy Cline’s Crazy.

The man has a wonderfully warped sense of humour and this was as rib-tickling an entrance you’d ever see for a world heavyweight title fight.

Wilder chose a more customary stroll, his face covered by a bejewelled mask with red laser eyes. This was pure Vegas, baby.

The first round was a slug fest, Fury using his jab as an offensive weapon and rocking the champion, who had landed a couple of powerful rights of his own.

Then at the end of the third it all went off as Fury landed a clean left and followed up with a right over the top to Wilder’s head sending him sprawling.

Wilder never truly recovered, spending the vast majority of the remainder of the fight on the ropes as Fury dominated.

The fourth was scrappy, Wilder decked by a trip, but early in the fifth, the champion was down again.

GYPSY KING OF THE WORLD

All the reaction as Fury beats Wilder in sensational rematch

FURY’S CROWNING MOMENT – ROUND BY ROUND

By Wally Downes in Las Vegas

”We are Sparta” Fury roared as he left the dressing room flanked by his security guard, brothers and corner team.

Dressed like a Poundland king, complete with Burger King crown, he was carried out on a throne pushed along by beautiful women dressed as very glamorous gladiators.

The song the avid mental health campaigner emerged to was Crazy by Patsy Cline, the lyrics alone were starting to worry some people.

In the starkest possible contrast, Wilder made his ring walk looking like Teenage Mutant Turtles enemy Shredder had been dragged through a diamond mine and was fuming about it.

Fury kept to all of his promises, he dashed across the ring and threw close to a dozen big right hands and lead left hooks.

Wilder warned him off with two of his won but the Brit dominated the rounds and always made the champ box on the backfoot where he is least comfortable with.It was a dream start.

Even Fury’s jab was

spiteful, Wilder had his head jolted back by one of the stiffest he has ever thrown as soon as the second started.

Both men landed firm one-two straight combinations and Fury ended the stanza well on top, barrelling Wilder into the corner and wrestling him briefly.

Fury kept it up as the third started, Wilder had almost never looked so vulnerable.

A looping Firy right hook had the one-sided crowd going again, all of Fury’s doubters were eating their words.

And he smashed him to the floor in round three, it was amazing.

A jab and right hand to the temple dropped Wilder to the deck. His senses were scrambled and he was back on the canvas seconds

Fury started the round well with a right uppercut on the inside but Bayless split up the grappling again.

A hapless Wilder was back down again in the fourth but it was called another slip, this was Bambi On Ice, a deer to the slaughter.

Yes he was unbalanced as he skated aimlessly around the ring but he was also battered and bruised and in too deep. Wilder still in a fog, his skinny legs betraying him.

One late right hand in the session reminded Fury of the danger but he was still so groggy from going down that it was an off-balance lunge more than a trademark punch.

Fury roared out again in sensational style, landing a big right hand. Wilder was totally defenceless, it was almost unfair, this terrifying champion was being slaughtered.

And he was dropped again with a perfect left hook to the body, the drowning champ beat the count easily but he was spent.

Fury was now toying with his food, leaning all over him and pummelling him so freely. Wilder was a ghost.

The Gypsy King was old-manning the beast three years his senior then Bayless warned Fury over holding and leaning over his prey.

Another instant serving of Fury genius, Wilder back on the ropes getting slapped and mauled and manhandled but the three stone stronger.

Fury had every right to chill out, to get on his bike and score points from afar, he could have coasted. Instead he was relentless, nasty, sensational.

The shot that ended the round was another Fury left hook that had Wilder using the ropes to hold himself up almost tragically.

In the break, before the seventh, you could see how horribly Wilder’s ear had swelled from a right clouting.

Trainer Jay Deas was surely warning him he was close to being pulled out of his one-sided hammering.

Wilder was then pulled out, the white towel of surrender hurled in soaked in Wilder’s blood.

The place erupted. It was magnificent.

Wilder and all of Fury’s doubters were battered from pillar to post.

Wilder’s team were left nursing a man with a string of injuries from the same man he had constantly accused of being pillow fisted.

It was everything Fury had promised and so much more.

This time it was a left hook, followed by a left to the body, which did the trick and by now it was only a matter of time.

The sixth was quieter but midway through the seventh came a withering sequence of punches which pinned Wilder into the corner and sent the towel flying.

After the violence came the karaoke. For Wilder it was the day the music died.

The referee is ready to step in as a powerful Fury left threatens to KO the Bronze BomberCredit: Getty Images – Getty

The Gypsy King celebrates with his new WBC titleCredit: ReutersTyson Fury speaks to the press after beating Deontay Wilder by 7th round TKO, confirms interest in trilogy rematch