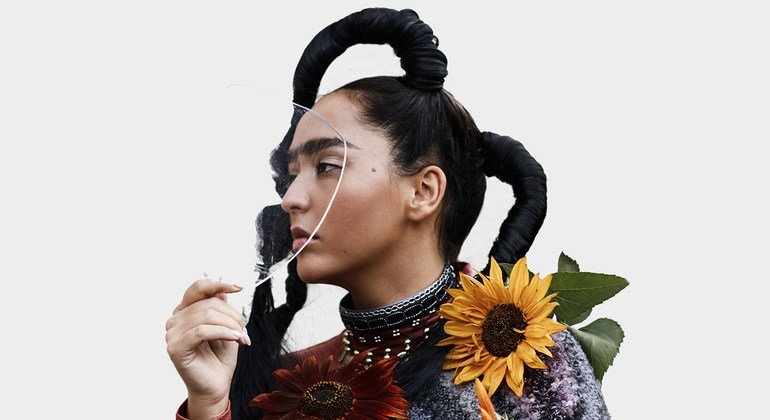 Manizha Sangin arrived in Russia as young refugee, when her family fled the violence of the civil war in Tajikistan. Today, she is a high-profile singer, representing Russia in the final of the 2021 Eurovision Song Contest on Saturday, with the song “Russian Woman”. Ms. Sangin is also a UN Goodwill Ambassador for the UN refugee agency (UNHCR), and a domestic abuse activist.

“In my career, there have been times when people I work with in the music industry have advised me to concentrate on building an audience and making money, and do my activism later.

They think that social activism and art are two different worlds that can’t exist together. But my team and I don’t agree. We aren’t saying that everyone has to behave in the same way, but it should be every artist’s choice to decide how to act.

My mother, who is also my producer, has always supported me. She says ‘if you want to talk about it, talk about it’!

My song ‘Mama’ is about domestic violence, which is a complex topic. One of the most difficult, but important, elements of dealing with this issue is working with those responsible for the violence. There are very few centres providing help for perpetrators, where they can admit their mistakes and work on improving themselves over a number of years. But I know it’s possible for them to change, because I’ve seen it with my own eyes.

If we want gender equality in society, there must be dialogue. That’s why I started an Instagram project where I would speak to men about their lives. I recorded long conversations, sometimes lasting several hours, and we used the beginning and the final phase of these conversations, when they would start to open up.

The idea was to show that men shouldn’t be ashamed to show their sensitivity and their emotions. Men can and should cry; they need to be more sensitive in order to be able to change.

I want to see a domestic violence law in Russian that really protects women, and more funds for crisis centres, that are helping a huge number of women; they are a place for women to hide from their abusers, and support them in their efforts to rebuild their lives. Since the pandemic, the need for these centres is even greater. Many women have

found themselves unemployed and, with nowhere else to go, they’ve been forced to stay with their abuser.

I have worked closely with UN Women, and the UN Population Fund (UNFPA), but my personal history, as a former refugee, is obviously a big reason for me becoming a Goodwill Ambassador. I think I am a good example of what a refugee can achieve in a new country, the country I call home.

One of my aims is to raise more awareness amongst the general population, so that they are more welcoming of people from other nationalities, and to let them know that, even if these people look different, they are still deserving of kindness.

Distrust and fear of others can make people very closed-minded and angry. I don’t think there are evil people and good people. All of us have the capacity to be good or evil. But, depending on your circumstances, negative or positive feelings can dominate. When you are afraid of losing what you have, you might look at someone who has come from another country and needs help, and think that there is no room for them.

So, when I sing in the Eurovision final, I know that I will have an incredible opportunity, to spread my messages to a very large number of people, and influence them in a positive way.”