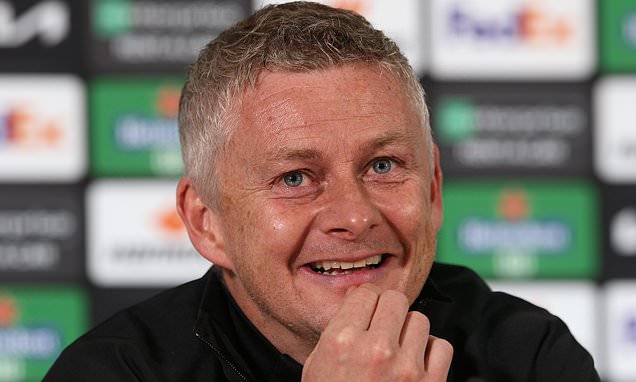 In the golden dome that sits among the imposing shipyards of Gdansk, Ole Gunnar Solskjaer will try to launch a new era of success at Manchester United.

The Gdansk Stadium, on the northern banks of this Baltic seaport, is the venue for United’s Europa League final against Unai Emery’s Villarreal.

Solskjaer will forever be remembered as the man who sealed Champions League glory on a dramatic night at the Nou Camp in 1999.

On Wednesday evening, he will attempt to deliver a trophy as United manager for the first time as he looks to add to the club’s three European Cups, one Cup-Winners’ Cup and the Europa League they won under Jose Mourinho in 2017.

It didn’t work out for Mourinho at Old Trafford, but Solskjaer believes victory this time could unlock the door to even greater success.

‘These are big nights for us,’ he said on Tuesday. ‘We have five wins in Europe and it might be the stepping stone for something better to come, a bright future.

United have been preparing for their Europa League final with Villarreal in Gdansk, Poland

WHY No 26 IS LUCKY FOR OLE GUNNAR SOLSKJAER

Wednesday marks 22 years since Ole Gunnar Solskjaer dramatically won the Treble for United in Barcelona on May 26, 1999.

His wife’s birthday is on the 26th, as is their wedding anniversary.

As he bids to win his first United trophy on May 26th he told the club’s website that he ‘has to believe in skjebne (the Norwegian translation of destiny)’.

‘This is a young team and it’s a team we have rebuilt over the last couple of years so hopefully this is the start of something more.

‘When players get the taste of success and win trophies, it can go two ways – “We’ve done it now and we can relax” or it just gives you more of that feeling.

‘I trust these players. I’ve seen something grow inside them – more and more confident, more robust, resilient – and as a group I’m confident we’re ready for this now.’

Despite reaching a final at last after four semi-final defeats and finishing second in the Premier League, Solskjaer was asked if the season can only be considered a success if United win on Wednesday.

‘Yeah, of course,’ he replied. ‘You can define the season after this final. So far we’ve improved, but we’ll only all go home happy if we win.

‘Every player who goes into a final has the expectation and pressure to win. We prepare to win, we plan to win, we expect to win, but I’m sure Unai Emery feels the same with his Villarreal team and his players.

the last few years and that they are set for more

Wednesday’s final feels like a date with destiny for Solskjaer – even more so because it falls on the 22nd anniversary of his famous Champions League winner in Barcelona and what would have been Sir Matt Busby’s birthday.

The Norwegian and his wife Silje were also both born – and got married on – the 26th of the month, all of which suggests it should be his lucky number.

‘When it’s something positive you think it will work in your favour,’ said Solskjaer.

‘I think it will be a good omen for us but the players need to do their job. Maybe we can honour Sir Matt’s birthday with another win.’

The memories from ’99 are not all good ones, it was revealed on Tuesday. Solskjaer grimaced as he recalled falling ill on United’s flight to Barcelona aboard Concorde and compared it to a much smoother passage into Poland on Monday.

‘It was a horrible, horrible flight, he said. ‘Sometimes I get seasick as well and it just rolls you from side to side. I was sick and had to go to the toilet.

‘The flight on Monday was comfortable. We’ve got to the end of the season, this final is the last one and we have to enjoy it.’

United, whose four European meetings with Villarreal have all ended in goalless draws, will go into the final as favourites.

However, they have not forgotten a painful semi-final defeat last season by Sevilla who went on to become the seventh Spanish winners of the Europa League in the last 11 years.

It built on Emery’s three previous successes with Sevilla and his remarkable affinity with this competition that also saw him lead Arsenal to the final in 2019.

The European showpiece will be played in front of 9,500 spectators (2,000 from each club)

‘This team grew up a lot and we’ve improved from that semi-final,’ said Bruno Fernandes. ‘The team is getting better and being in the final is good, but to be perfect we have to win.’

The game will be played in front of 9,500 spectators, including 2,000 fans from each club.

Defender Luke Shaw said: ‘We wish it was full, of course, but we had a bit of a taste of fans back at Old Trafford and you felt goosebumps when you walked out.

‘This final will be the same. Hopefully we can give them a night to remember for a long while.’