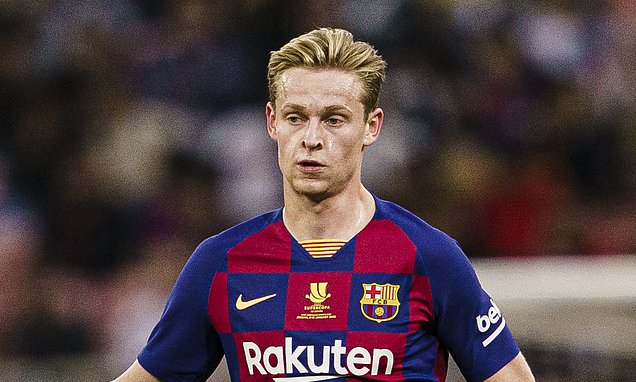 ‘I want to win all the titles but if I had to choose one it would be the Champions League’: Frenkie de Jong targets European glory over domestic honours as Barcelona aim for treble

By Anthony Hay for MailOnline

Frenkie de Jong would prioritise winning the Champions League over LaLiga and Copa del Rey as the Barcelona midfielder wants his side to be the best in Europe.

Barcelona are battling it out on three fronts with the Catalan giants top of LaLiga, still in the Copa del Rey and set to face Napoli in the last 16 of the Champions League next month.

De Jong was part of the Ajax side which progressed to the semi-finals of the Champions League last season and he is now desperate to experience winning Europe’s most prestigious competition.

Speaking to Marca after Barcelona’s 2-1 win over Ibiza in the Copa del Rey on Wednesday, De Jong said: ‘I want to win all the titles, but if I have to choose one, I would choose the Champions League.

‘However, I [also] want to lift LaLiga Santander and the Copa del Rey.’

‘[Setien] doesn’t ask me to do anything in particular,’ De Jong continued.

‘The idea he has is the same as Valverde’s because it is Barcelona’s idea… that of the possession football.

‘The only thing has changed are the small details, but his intention is to have the ball.’

Sky TV customers across the UK can watch LaLiga action for FREE this weekend on Channel 435. LaLigaTV is the first dedicated channel to broadcast every available live match and provide 24/7 access to ‘All of LaLiga, All in one place.’