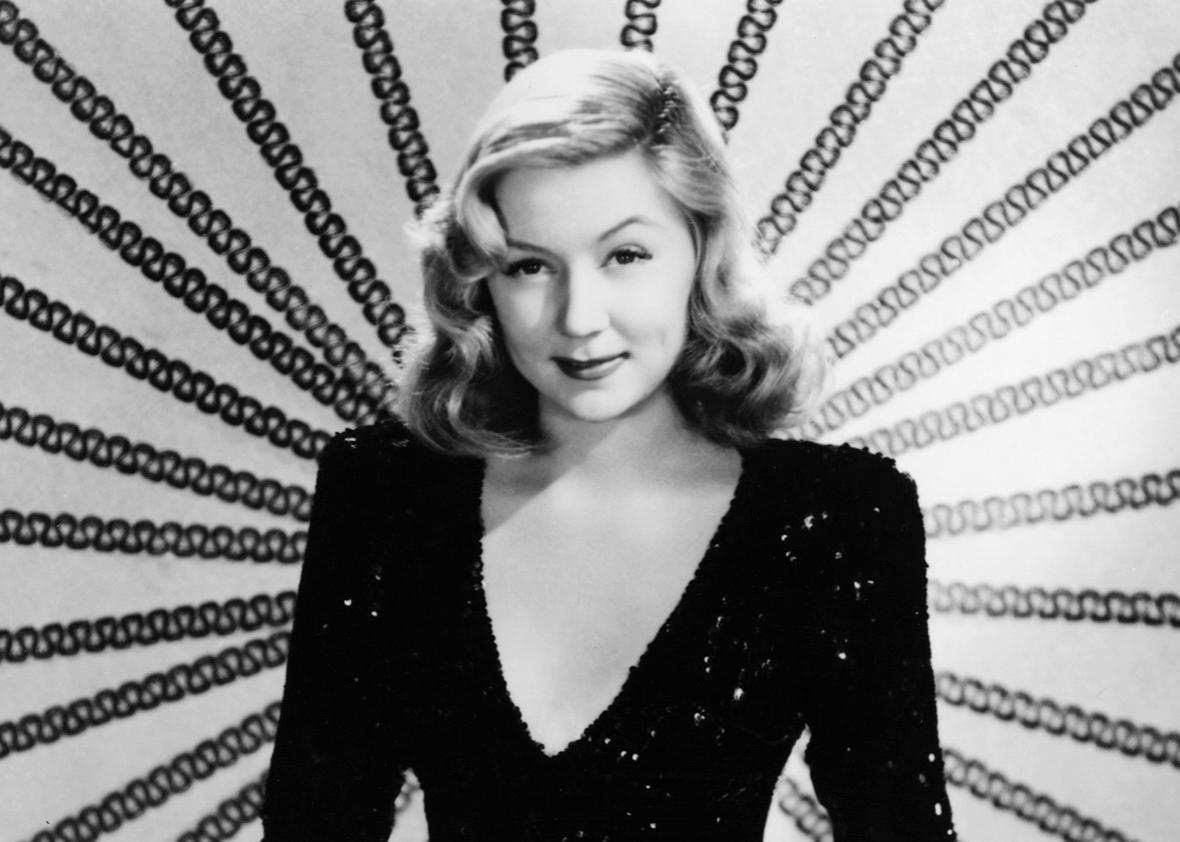 You Must Remember This, the podcast that tells the secret and forgotten history of 20th-century Hollywood, has joined Panoply. And when each episode airs, creator and host Karina Longworth will share some of the research that went into the episode in a transcript excerpt here on Slate. Listen to the complete Episode 13 below, and subscribe to You Must Remember This on iTunes.

Frank Capra had been searching high and low for an actress to play Violet Bick, the head-turning town flirt in It’s a Wonderful Life. The film was being made at RKO, but Capra couldn’t find a girl he liked there, so he called the casting department at MGM and asked if they had any “young blonde sexpots” that Capra hadn’t seen.

Billy Grady, head of casting at MGM, answered in the affirmative: “For Chrissake, I’m up to here in blonde pussies that have never been to the post.” Grady showed Capra some tests, and when Capra asked about one of them in particular, the casting man replied, “She’s a star, but do you think I can get any of our jerks to listen? Two years she’s been around here snapping her garters. You can have her for a cup of coffee. Name’s Gloria Grahame.”

Grahame’s work in 1946’s It’s a Wonderful Life caused MGM’s jerks to pay more attention to her, but she had never thought much of her own appearance, and when she started seeing her face blown up on a 50-foot screen, all she could see were imperfections. At some point around this time, Grahame had the first of many, many facial operations. Most of her plastic surgery was intended to correct what she felt was a problem with her upper lip, but she also had quite a bit of unnecessary dental work in an effort to change the way her mouth looked. Most observers of Grahame have said that these operations were the endgame of her painful insecurities. She thought her only value was the way she looked, and she was certain she didn’t look good enough.

The results of Grahame’s fiddling with her face were visible by 1947. MGM’s Louis B. Mayer still hadn’t figured out what to do with her, and once again she was loaned out to RKO, this time to play a small role in Crossfire, the first Hollywood film to deal directly with anti-Semitism. Soon RKO bought out her contract, and the sexy vulnerable bar waitress that Grahame played in Crossfire would set the template for most of the essential films of her career. RKO wasn’t always the best place for Grahame—she bristled against some of the material they offered her, and Howard Hughes would force her to make movies she hated, like Macao. He also prevented her from being borrowed by Columbia to star in Born Yesterday, which became, for Grahame, the movie that got away. But RKO made a lot of movies that needed her particular talents. She was one of a handful of women whose careers seem like they couldn’t have existed if not for the decade-long trend of film noir. MGM didn’t really make film noirs, so she had to leave in order to fully realize her potential.

A nearly divorced Grahame met her next husband on the set of her first picture under contract to RKO, A Woman’s Secret, a melodrama co-starring Maureen O’Hara and directed by Nicholas Ray. There were suspicions that Grahame was been given special treatment at RKO because she was sleeping with studio chief Dore Schary, which may or may not have been true, but not long after production began, Grahame was definitely sleeping with her director. By most reports, Grahame surrendered herself to Ray’s direction, although reports vary as to how far his manipulations went. One Ray biography contends that it was the director who suggested that Grahame start stuffing tissue behind her lip in order to exaggerate the puffiness of her mouth. Grahame’s biographer claims the tissue was her idea, and that she also started painting on her own exaggerated lipstick pout beginning with this film. Either way, Gloria Grahame was definitely developing a look centered around a big, artificial mouth.

Gloria Grahame and Nicholas Ray’s relationship wasn’t exactly love for the ages. “I was infatuated with her,” Ray is said to have said, “but I didn’t like her very much.” Gloria went to Las Vegas in April 1948 in order to begin the six-week residency that would allow her to expedite her divorce from her previous husband. The residency ended on June 1, and that afternoon Grahame was granted her divorce. That evening, she married Ray. Their s

Though her marriage to Ray wasn’t exactly a picnic—he admitted later that he spent most of his time gambling so that he wouldn’t have any money for her to share as community property—Ray had still fought to cast her inIn a Lonely Place, a film based on a novel by Dorothy Hughes that he was developing for Humphrey Bogart for his production company to set up at Columbia Pictures. In Hughes’ novel, protagonist Dixon Steele had posed as a mystery writer to cover for his real career as a serial killer. In Ray’s film, Steele would be transformed into a semi-washed-up screenwriter who is suspected of killing a young woman. His beautiful fledgling actress neighbor, Laurel, gives Dix an alibi, and then the two neighbors fall in love. For most of the running time of the movie, neither Laurel nor the viewer is sure whether or not Dix is a killer, but his possessiveness of her is increasingly scary. Bogart has never been more unsettling in a movie, his masculinity has never felt more like a sick joke, he’s never seemed more helpless or out of control.

It’s as despairing a film about Hollywood as Hollywood has ever made, not because of its satire of industry speak, which is so insidery it’s almost too much, but because of the way it uses this single, doomed relationship to reveal the way so many Hollywood movies are about a man’s fundamental fear of a woman—or maybe more precisely, what that woman could turn the man into. Bogart had wanted to cast his wife, Lauren Bacall, as Laurel, but Warner Brothers refused to loan her out, so Ray cast his own wife instead. There was some worry that the combative nature of their marriage would cause problems on the set, to the point that Grahame was forced to sign a contract in which she agreed “that my husband shall be entitled to direct, control, advise, instruct, and even command my actions during the hours from 9am to 6pm, every day except Sunday, during the filming of In a Lonely Place … in every conceivable situation his will and judgement shall be considered superior to mine and shall prevail.” She also signed away her wifely right to “nag, cajole, tease or in any other feminine fashion seek to distract or influence him.” Grahame at first fought this contract, calling it “slave labor,” but she had no choice but to go along if she wanted to make the movie.

She also had to go along with her husband rewriting the film until it became a portrait of the emotional collapse of their marriage, with her character essentially taking on three different forms: first the bewitching, slightly dangerous seductress; then the motherly nurturer who types her man’s script pages and puts him to bed when he’s been up all night; and finally the two-faced betrayer who plots to leave him when he thinks the relationship is secure. The most famous lines in the film were written by Ray himself, couched as lines that Bogart wants to try to fit into his own screenplay, which he admits to Laurel in a moment of high relationship tension:

Filming itself went smoothly—Grahame was completely receptive to Ray’s direction, and the film was completed inside of its schedule—but before the end of the shoot, Ray had moved out of his marital home.

Around the time In a Lonely Place was released, Grahame and Ray reconciled, and she and their son moved into his new house in Malibu. It has been said that their strong sexual connection brought them back together, but sex was also a strain on the marriage. Ray wanted Grahame, but he was also paranoid that her appetite was somewhat less than discriminatory, that she just had to have it, and not necessarily from him. Was he right? Grahame’s girlfriends, interviewed after she died, weren’t the ones telling stories of her supposedly insatiable sex drive—it was men, not all of them involved with her, who claimed that Grahame was a man-eater. (Her girlfriends talked, instead, about her pathological fear of being alone.) Maybe she was a nymphomaniac. Or maybe she got that reputation in part because of one sexual relationship in particular which, to some people, couldn’t have been explained any other way.

One night in early summer 1951, Grahame opened the door of the Malibu home to find Tony Ray, Nick’s 13-year-old son from his previous marriage. Grahame had first met Tony when he was 10 years old. He had been away at military school, and was now hoping to spend some time with his father, to whom he had never been close. But that day in 1951, Nick wasn’t home. And Grahame and Tony couldn’t take their eyes off each other. They went to bed, and that’s where Nick found them when he came home. This was the final straw in Gloria Grahame’s marriage to Nicholas Ray. Tony Ray would disappear from her life. For a while. He’d be back.