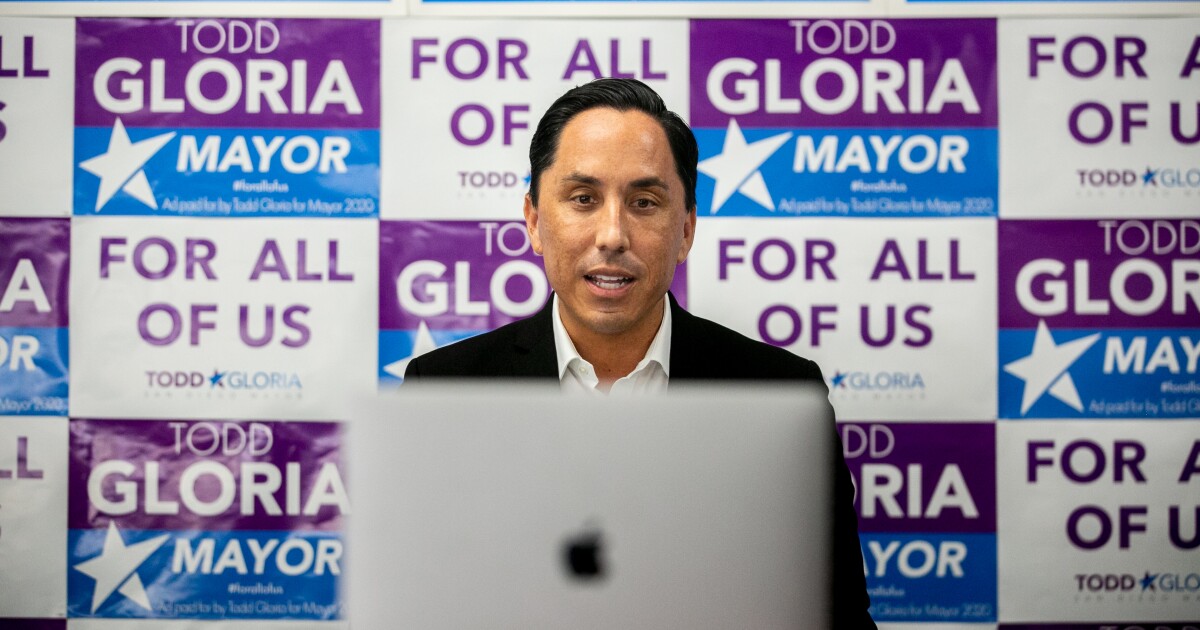 California state Assemblyman and San Diego mayoral candidate Todd Gloria is calling on the city to investigate how a doctored legal memo was leaked to NBC7 reporters and became the basis of a now-retracted report that alleged he misled people about the cost of the 101 Ash Street building while he was on the City Council in 2016.

The city has been unable to move into the Ash Street high rise for almost four years despite spending more than $50 million on lease payments and upgrades.

The NBC7 report reported on what it though was a legal memo written by one of the firms investigating the deal, but the firm and city officials have said parts of it were fabricated.

Gloria on Friday called on NBC7 to be transparent about their internal investigation into who leaked the memo.

The local news station said in its retraction Thursday that the memo was obtained from a source unknown to the station, but the memo was “mistakenly” confirmed as accurate by a second source who works for the city.

Gloria then cited Facebook ads paid for City Councilwoman Barbara Bry, who he said is running a negative campaign against him.

A San Diego Union-Tribune review of Bry’s Facebook ad buys since the NBC7 story published on Sept. 3 showed the Bry campaign promoted the NBC7 story six times, spending between $1,000 and $1,500, and reaching between 125,000 and 150,000 people, according to Facebook’s advertising library.

Four of the ads were suspended Friday.

However the initial link to the story, shared on the Barbara Bry for Mayor Facebook page, was still published on Facebook as of 3:30 p.m. Friday. The post was removed shortly after the Union-Tribune asked the Bry campaign about it.

In an emailed statement, Bry defended her critique of Gloria over the 101 Ash Street deal and denied having any responsibility or involvement in the retracted story.

“My campaign has not engaged in the kind of personal attacks and misrepresentations that have formed the foundation for Mr. Gloria’s campaign,” Bry said in an emailed

“Mr. Gloria’s news conference was an attempt to resurrect a failing campaign and shift public’s attention from his responsibility for the terrible 101 Ash Street transaction.”

Along with details about the Ash Street building’s problems, the NBC7 story reported on a footnote in the legal memo that said Gloria had misrepresented the cost of the former Sempra Energy headquarters when he served on the City Council in 2016.

The same footnote said City Attorney Mara Elliott shielded Gloria from investigators examining the transaction in the wake of the bungled deal.

The allegations in the story spread quickly across San Diego and rattled the political campaigns of both Gloria and Elliott, who are facing separate rivals in tight November runoff elections.

The Union-Tribune reported the NBC7 findings last Friday. Although that report included a notation that the newspaper had not been able to confirm the allegations, it also included separate reporting showing that the building had appraised for millions less than the city agreed to pay in a 20-year lease-to-own arrangement.

Within hours of the NBC7 post on Sept. 3, Gloria, Elliott and the Orange County law firm that wrote the memo flatly denied the assertions. Burke, Williams & Sorensen issued a statement refuting the allegations and calling the portion of its memo “Fabricated Footnote 15.”

Two lawyers for the firm later filed sworn affidavits that they never wrote the footnote. Nonetheless, the news outlet stood by its report for just over a week.

A spokeswoman for Elliott sent out a tweet late Thursday critical of the television news station.

“I let NBC know the document was doctored before they published the story, but they went ahead anyway,” Elliott spokeswoman Hilary Nemchik wrote on Twitter. “It stayed up for a week because they had a reliable source. It was not a reliable source.”

The revelation that someone deliberately falsified a legal memo and fed it to a media organization has roiled local political circles and the San Diego community of journalists.

In announcing its retraction, NBC7 said it remains committed to reporting on the Ash Street transaction.