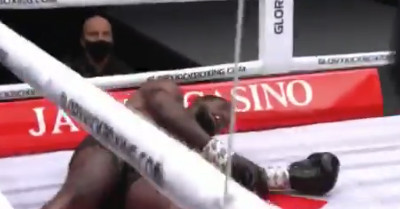 Cedric Doumbe remains the Glory welterweight champ after a highlight-reel stoppage at Glory 77.

Doumbe flattened challenger Murthel Groenhart with an overhand right in the second round of their pay-per-view bout on Saturday. When Groenhart barely beat the 10-count, Doumbe was declared the winner via TKO at the 2:52 mark of the round.

Check out the video below.

is STILL the Best welterweight on the planet! #GLORY77

Don’t miss the light heavyweight title up next, only on PPV.

Cameroon native Doumbe has held the Glory welterweight title since March 9, 2019, when he defeated Harut Grigorian via TKO to capture the belt at Glory 64.