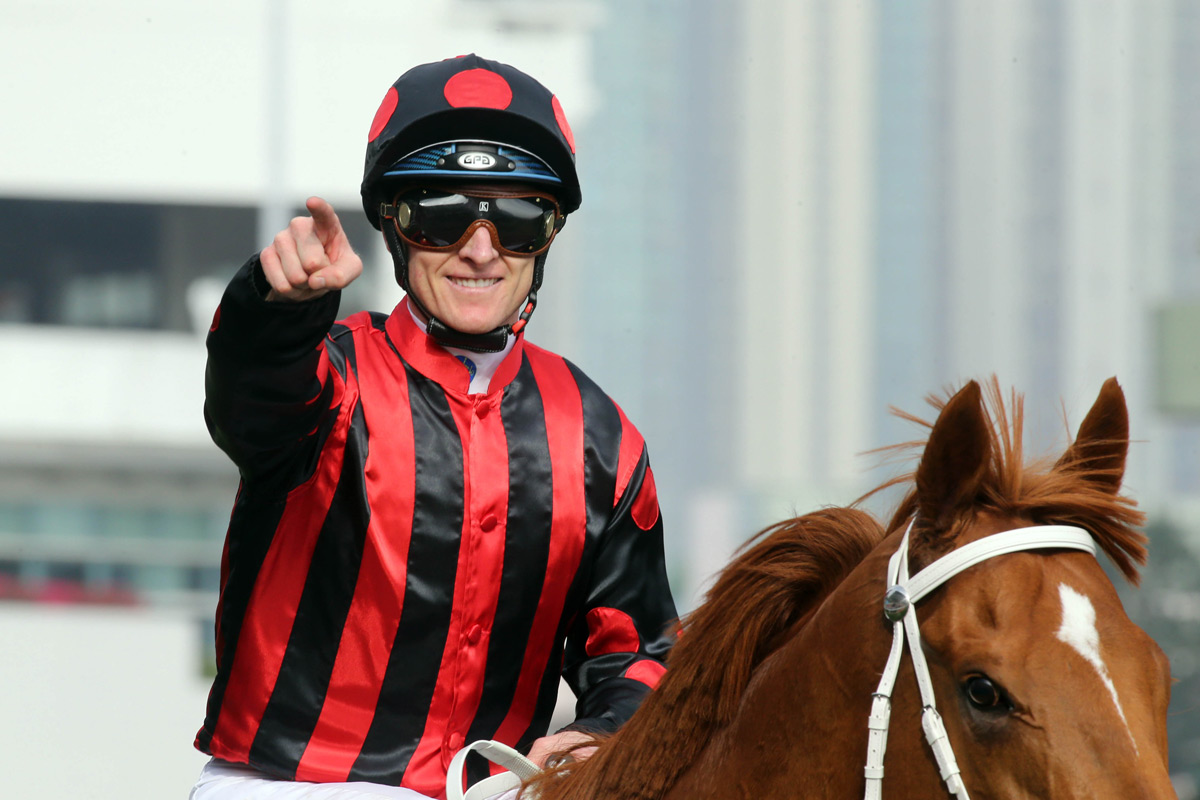 REIGNING champion Zac Purton looks to have the necessary fire power to eat into the four-win deficit at the top of the jockeys’ title race at Happy Valley on Wednesday.

The Australian pilot would not have been in the best of spirits after racing at Sha Tin on Sunday.

Not only did rival Joao Moreira become the first jockey to reach 100 winners for the season, but he also completed a treble during the afternoon.

To rub salt into the wound, Purton finished second in all three of them!

Both jockeys have a full book of rides on the nine-race card, but it’s Purton who appears to have the stronger deck of cards.

One of his best rides will be SHANGHAI MASTER, who could be set for his first win of the season when he lines-up in the Larch Handicap (Div II – 1.15pm) over six furlongs.

The Francis Lui-trained galloper came from the clouds when a strong finishing third from the outside draw last month, and this time from a more favourable berth will sit closer to the early pace.

It’s worth pointing out that Shanghai Master and Purton had a serious workout over six furlongs on the dirt surface on Monday morning as a prep for this contest, meaning he should be spot on for this.

Purton may have already been in the money earlier in the day, with the likes of Virtus Star, who has a winning chance in the opening Walnut Handicap (11.45am) over the extended mile, and fast improving Compassion Star, who seemingly only has Yee Cheong Pegasus to beat in the Larch Handicap (Div I – 12.15pm).

The combination landed a gamble at Sha Tin last month despite running over seven furlongs, a trip considered too short by many pundits.

Judged on previous form, he will be a much better horse over a mile and could still be ahead of the handicapper.

Finally, keep a close eye on another of Purton’s rides, Dances With Dragon, who lines-up in the best race on the card, the £200,000 Cedar Handicap (3.50pm) over nine furlongs.

This is a race full of tough and competitive gallopers, as well as some smart four-year-olds who came up short in last month’s Hong Kong Derby but should find this competition easier.

Dances With Dragon was transferred to Caspar Fownes’ yard back in February and hit the bullseye straight away when partnered by Purton.

This looks a tougher assignment, though the omens are good following an eye-catching run on the all-weather recently.

He is capable of going close against better fancied rivals.

For anyone looking to place a bet on racing at Happy Valley today, the Tote (tote.co.uk) are offering an extensive range of markets, including the popular Tote Placepot (Races 4 to 9).

We were lucky enough to get the placepot up last week, so hopefully we can repeat the dose!

Placepots are now available with the Tote on Hong Kong racing