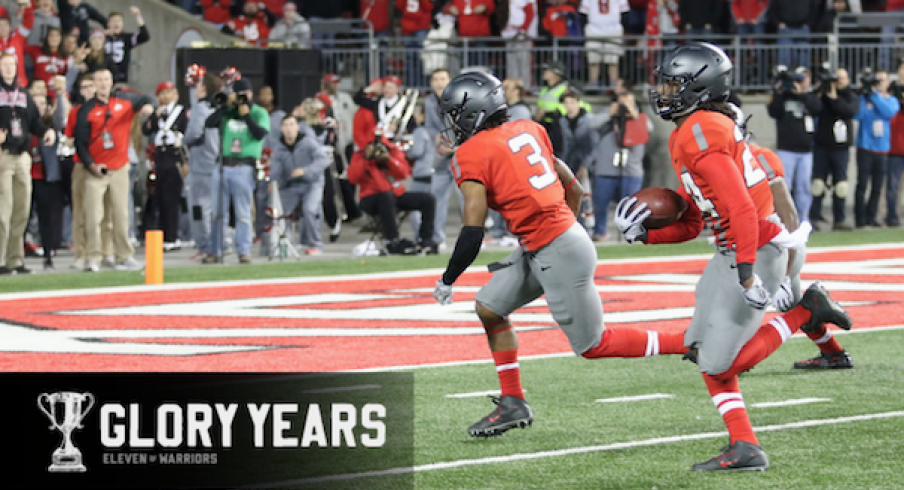 Although Ohio State’s entrance to the DBU conversation has mostly revolved around its recent dominance, the Buckeyes’ success at the third level of defense has been well-documented for decades. With legends scattered all over Ohio State’s history, from Jack Tatum to Jeff Okudah, the Buckeyes have one of the deepest defensive backfields in college football history. Today, we’ll try to rank the greatest secondaries since 1970 by expanding on our previous Glory Years ratings.

For each year, we used our rankings for cornerbacks and safeties to determine the top four defensive backs by the ranking system. Unlike our previous rankings, however, our rankings of the best secondaries in program history are continuous, with points given for each of the following variables. The points for each variable is based on the rarity of the event.

Altogether, the values for each variable and their associated point value was added together, meaning the highest score marks the best season. The following outputs were determined to be the ten greatest seasons by a secondary in Ohio State history.

After an undefeated season in 2012, the Buckeyes were ready for their first bowl-eligible season under Urban Meyer. The defensive backfield of C.J. Barnett, Bradley Roby, Doran Grant, and Armani Reeves proved to be one of the best in the country and returned two interceptions for touchdowns, tied for the seventh-best mark in program history.

In Urban Meyer’s inaugural, undefeated season, the tandem of Bradley Roby, C.J. Barnett, Travis Howard, and Orhian Johnson stepped up to the challenge. The secondary ranks third in pass break-ups per game, averaging three per contest.

Coming off of a national championship, the 2002 Buckeyes were looking for another dominant season. Will Allen, Nate Salley, Dustin Fox, and Chris Gamble shored up the defensive backfield, averaging over 21 tackles per game, the fourth-best mark by a secondary in program history.

Allen and Gamble each earned consensus All-Big Ten honors. Allen also planted a tree in Buckeye Grove following his senior year. Fox’s 2002 season is ranked as the 10th-best by a cornerback in program history.

On one of the best defensive teams in Ohio State history, the secondary of Terry White, Sonny Gordon, Greg Rogan, and William White was the final obstacle after a grueling front seven. The group ranks first in chaos factor and third in tackles per game for a defensive backfield.

Terry White earned All-Big Ten honors following the season. His junior season ranks as the second-best by a safety in program history and Gordon’s 1986 season is No. 3.

After a disappointing end to the previous season, the Bucks looked to rebound in 1996. Damon Moore,

Just a couple of years into Earle Bruce’s tenure, Shaun Gayle, Garcia Lane, Douglas Hill, and Kelvin Bell started their run of dominance in the secondary. The foursome ranks second in program history in pass-breakups per game, averaging over three per game.

Led by the hard-hitting Mike Doss, the secondary to start the new millennium included Nate Clements, David Mitchell, and Derek Ross. The group averaged over 20 tackles per game, the seventh-best mark in program history.

Clements and Doss both earned All-Big Ten honors after John Cooper’s final season in Columbus. Doss’ season ranks as the eighth-best by a safety in program history.

Arguably one of the greatest secondaries of all time, the 2016 group of Malik Hooker, Marshon Lattimore, Gareon Conley, and Denzel Ward is the most dominant defensive backfield since the turn of the century. The secondary returned four interceptions for touchdowns, the best mark in program history.

A part of one of the most talented teams in school history, Damon Moore, Antoine Winfield, Ahmed Plummer, and Nate Clements completed a fantastic stretch for Buckeye defensive backs. The foursome averaged 3.33 pass-breakups per game, the highest mark in program history.

Antoine Winfield earned consensus All-American honors following his season, which ranks as the best year by a cornerback in program history. He also became the first Buckeye to win the Jim Thorpe Award. Moore and Plummer, whose 1998 seasons ranks No. 5, both earned All-Big Ten honors.

The best defensive backfield in program history, the 1997 tandem of Antoine Winfield, Damon Moore, Gary Berry, and Ahmed Plummer take the crown. The secondary ranks in the top-ten for all of the categories, including fourth in chaos factor and fifth in pick-sixes.

Winfield, after becoming the first defensive back to lead the Bucks in tackles, and Moore earned All-Big Ten honors following the season. Winfield was a non-consensus All-American as a junior.