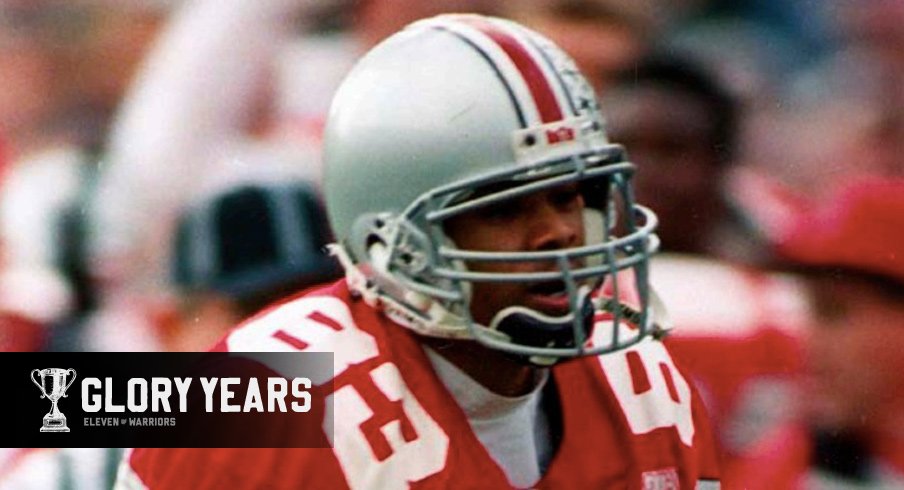 Offensive evolution in college football has led to more passing than ever. Look no further than right in our own backyard where Ryan Day’s teams are likely to put up numbers that make the 96% of Ohio State football history dominated by the running game seem a bit quaint.

The passing record book in Columbus really does seem to be written in pencil these days, however, Ohio State’s history features wide receivers who may not have been part of the prolific offenses you see today, but were undoubtedly the stars of the vertical game.

Saying that, we wanted to see how receivers from different eras stacked up and have come up with a ranking system that takes into account a wide receiver’s efficiency, production and much more.

When we looked at the running backs last week, we relied on a nonparametric ranking system to determine the greatest rushing season in program history. We’re back with more of that this week, specifically, looking at the following seven statistics, chosen and ranked for all receivers with at least 20 receptions in a season dating back to 1954.

Each variable is weighted equally, helping us compare players with massive production (David Boston, 1998) and unequaled efficiency (Devin Smith, 2014). Altogether, the ranks were averaged out to find a composite ranking. The following outputs were determined to be the ten greatest receiving seasons in Ohio State history.

Even before earning a tree in Buckeye Grove, Cris Carter had one of the best pass-catching seasons in Ohio State history. In Carter’s sophomore year, he gained 950 receiving yards and recorded nearly 40% of his team’s receiving yards, the 12th best mark in program history.

Carter earned First Team All-Big Ten honors in 1985 after Ohio State’s 9-3 finish and victory in the Citrus Bowl, which included this legendary catch.

After failing to be the team’s top option for the first three years of his collegiate career, Sanzenbacher became the top dog in 2010. With Terrelle Pryor under center, the Maumee native caught 55 passes for 948 yards and 11 touchdowns, which is tied for seventh in program history.

Sanzenbacher was Ohio State’s leading receiver in 2010 and gained more than half of his career total in his senior year. He earned First Team All-Big Ten honors at the end of the year.

Even with Maurice Clarett in the backfield, Michael Jenkins put up one of the most impressive and memorable seasons in Ohio State history in his junior year. In 2002, Jenkins recorded 1,076 yards (fourth in program history) and over 44% of his team’s total receiving yards (fourth in program history). Chris Gamble was the only other pass-catcher to record more than 200 receiving yards in 2002.

With Art Schlichter under center, Doug Donley’s senior season was revolutionary. Donley was Schlichter’s favorite target for two years, breaking records along the way. In his 1980 season, Donley gained 887 receiving yards, which was a school record at the time, and averaged over 20 yards a catch, which is the seventh-best mark in program history.

As a part of the 2007 team that advanced to the BCS National Championship Game, Brian Robiskie was a perfect complement to Chris “Beanie” Wells. With Brian Hartline on the other side, the duo took full advantage of Wells’ brutal rushing style. Robiskie’s junior year ranks in the top-13 in receiving touchdowns (11

After being the top receiver on the 2007 team, Robiskie was named a semifinalist for the Fred Biletnikoff Award despite being snubbed from the all-conference teams. He ranks fifth in career receiving touchdowns (24 TDs).

After his spectacular sophomore season, Carter one-upped himself in 1986. In his junior year, the Middletown graduate recorded 1,127 yards with 69 receptions, good for the third and sixth-best marks in school history. Additionally, Carter recorded 44.5% of his team’s receiving yards, the third-best mark in Ohio State history.

Carter’s junior season made him a consensus All-American, becoming the first wide receiver in program history to earn a tree in Buckeye Grove. Carter was also named to Ohio State’s All-Century Team and Ohio State’s Varsity Hall of Fame.

Before Troy Smith’s Heisman campaign in 2006, the signal-caller had Santonio Holmes to lean on in as a first-year starter in 2005. In Holmes’ redshirt junior year, the pair connected for 977 yards and scored over 61% of his team’s receiving touchdowns, the sixth-highest mark in program history.

For his career, Holmes ranks fourth in receiving touchdowns, seventh in receiving yards, and eighth in receptions. He was named to the First Team All-Big Ten team by the coaches at the end of the season.

One of the greatest receivers in Ohio State history, David Boston’s 1998 season with Joe Germaine was the final act of an incredible decade of wideouts. Boston gained the most receiving yards in a single season in program history (1,435 yards), the second-most receptions in a single season (85 receptions), and the third-most receiving touchdowns (13).

Boston holds the school record for receiving yards and receiving touchdowns. He also has the second most catches in program history behind K.J. Hill. He was also named to Ohio State’s All-Century Team.

Starting his career as a walk-on, Glenn had to wait his turn before breaking out. Now, his 1995 campaign is ranked as the greatest pass-catching season in Ohio State history. Glenn’s junior year placed him in the top-11 in all seven categories, including No. 1 in receiving touchdowns (17 TDs), No. 2 in receiving yards (1,411 yards), and No. 4 in yards per catch (22.0 yards/catch).

With Eddie George in the backfield, the 1995 Buckeyes have posted the two top individual seasons in the Glory Years series. Ohio State went 11-2 in 1995 with a loss to Michigan ruining a chance for one of the greatest seasons in program history. At the end of the season, Glenn was named a unanimous All-American and was awarded the Fred Biletnikoff Award as the nation’s top wide receiver. Glenn was also named to Ohio State’s All-Century team along with David Boston, Cris Carter, Doug Donley, Joey Galloway, and Paul Warfield.