Holocaust survivor Gloria Lyon recounts her years spent in Nazi concentration camps, where the combination of malnutrition and hard labor resulted in severe damage to her spine. She has since recovered after successful spinal surgery at UCSF Medical Center.

The UCSF Spine Center helps more than 10,000 patients every year, but few have back stories as remarkable and haunting as Gloria Lyon’s.

As a teenager in war-torn Hungary, Lyon and her family were seized by the Nazis the day after Passover in 1944. They were taken from their farm house to a brick factory, packed into cattle cars and sent on a long, rumbling haul to a faraway concentration camp.

Arriving at Auschwitz, Lyon came face-to-face with the notorious Nazi doctor Josef Mengele, who was infamous for his inhumane medical experimentation upon prisoners. She remembers how he wore white gloves and held a riding crop, which he pointed left or right as the prisoners filed passed — separating the men from the women and those whom he condemned to slave labor from those he was sending to their deaths in the gas chambers.

Lyon was spared the gas chambers at first pass. She was instead tattooed with a number and forced to work in a warehouse barrack, sorting the clothes and possessions of incoming prisoners — all within sight and smell of gas chamber and crematorium No. IV. 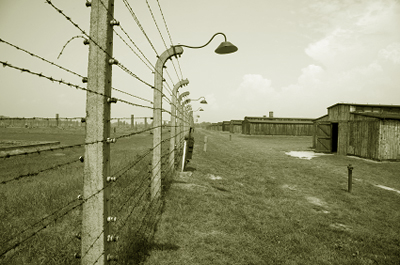 Auschwitz, Poland: The Auschwitz concentration camp is located about 50 km from Krakow. This photo is from Auschwitz II- Birkenau. The wooden barracks are simple compared to the brick houses in Auschwitz I. To the left are brick chimneys from barracks burned down by the nazis when the Red Army was getting close.

Later Lyon was sent to the gas chambers herself, and she only escaped with her life by jumping from a moving truck and hiding all night in a culvert. She found her way back into a different prison barrack and, mingling with a new set of prisoners, wound up on a transport to a second concentration camp. From there she went on to a third concentration camp. And another after that. And another, and another….

In all, Lyon spent time in seven prison camps before being liberated in 1945 by the Swedish Red Cross. During that time, she was

forced to do an unimaginable amount of hard labor. She worked in factories, she assembled gas masks, she cleared rubble from the streets after allied bombing raids and, at one point, she was part of a crew building V1 and V2 rocket parts in a deep underground salt mine.

After the War, she reconnected with her family, most of whom miraculously survived the Holocaust. She immigrated to the United States and met her husband, a law student and an American veteran of World War II. They lived in San Francisco and raised a family together.

Back Problems a Legacy of the Holocaust

Since 1977, Lyon has been speaking about her experiences regularly to students in high schools, middle schools, universities, and other audiences. The San Francisco Chronicle recently followed her to one of these events.

Over the same period of time, she has been plagued by physical pain, spinal problems and other health issues related to her time in the camps. The months and months of starvation added to the criminally cruel forced labor took its toll on her body, weakening her bones and contributing to major back problems.

Undergoing more than a score of surgeries over the last few decades, she was referred to UCSF after she had reached a point where she was in constant, excruciating pain, unable to stand up straight, and at risk of losing her ability to continue her work of sharing her Holocaust story.

At UCSF Medical Center, spinal surgeon Praveen Mummaneni, MD, an associate professor and vice chair of the Department of Neurological Surgery, met with Lyon and designed a surgery to repair her spine. The operation was complicated because of her age, since bones become thinner and more fragile with age, but the surgical team prevailed, and in the end Lyon made a full recovery.

In the months since, Lyon has continued her educational work in Europe and has given numerous presentations to California students. She is now putting the finishing touches on a book — a personal memoir of her life.

MOREIDOMOS’s New Book De La Gloria Al Exilio, An Uplifting Story Of A Woman’s Redemption From Exile In Life By The Grace And Mercy Of God | News