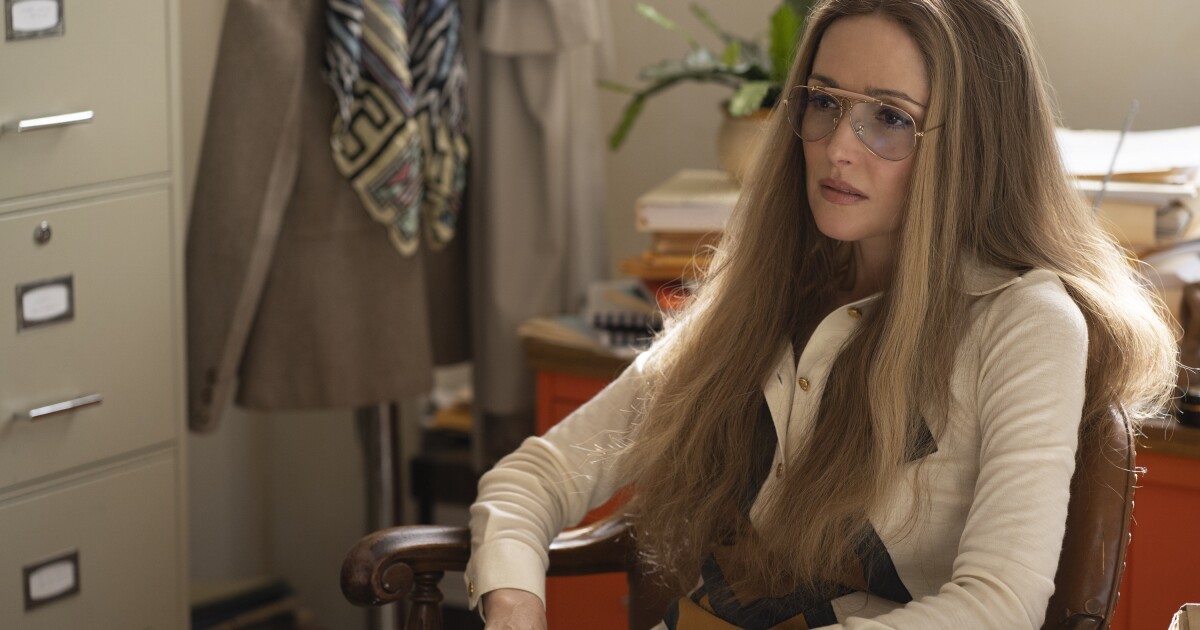 “Mrs. America,” a limited series about the fight over the Equal Rights Amendment, has won acclaim for fantastic performances from some of the finest actresses in the business — including Cate Blanchett, Margo Martindale, Rose Byrne, Tracey Ullman and Uzo Aduba.

But no one should overlook the show’s most valuable supporting players: the wigs.

Not since “The Americans” concluded its run has a drama series made such spectacular use of hairpieces. The “Mrs. America” hair team had to re-create dozens of diverse looks of the 1970s, from Betty Friedan’s silver-streaked shag to Phyllis Schlafly’s stiff meringue-like updo to Gloria Steinem’s face-framing mane. For women on both sides of the issue, hair is a source of pride and insecurity — and hair salons are a crucial meeting space where they discuss relationships, family, work and politics.

“It was a massive undertaking,” said hair designer Anne Morgan, who had to contend with 98 characters in wigs, some of them in multiple looks. Because the wigs would take six to eight weeks to create, she started designing looks for the major characters in early 2019, months before the series went into production in Toronto — and figuring out who would make which character’s wigs based on where the actresses were living at the time and who they’d worked with before.

Once filming was underway, hair department head Rick Findlater and a team of stylists took over day-to-day styling of the wigs. Morgan regularly worked 90-plus hours a week during the five-month shoot. “I’ve done some very tough shows,” she said. “But this had major challenges. So many women, so many wigs, and really, just not enough hands.”

Here’s a look at how she created some of the show’s most eye-catching wigs. 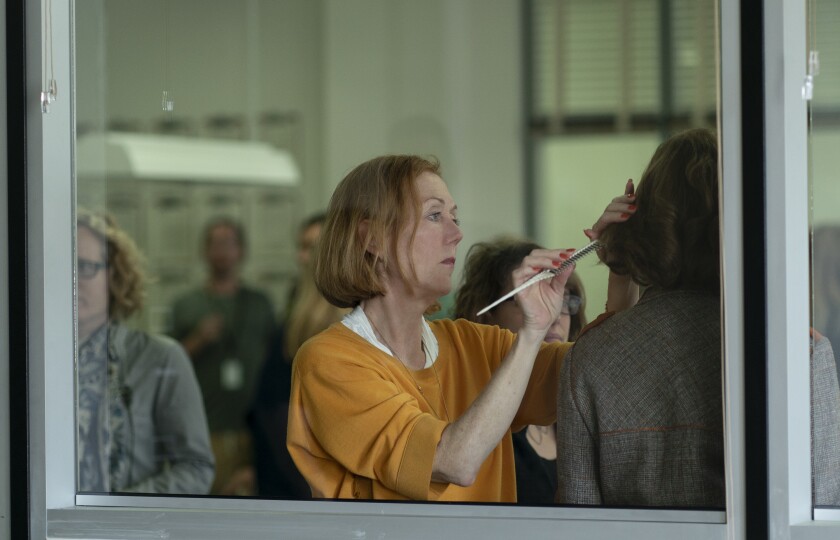 Hair designer Anne Morgan on the set of “Mrs. America.”

Arguably the most crucial wig in the series is the one worn by Byrne as feminist leader Steinem. When the actress signed on to play the cofounder of Ms. magazine — probably the most readily identifiable figure in the series — she felt strongly about one aspect of her character’s look.

“None of the costumes were going to work until we got the hair right. It’s so distinctive. I was obsessed,” she said.

Both Morgan and Byrne immediately thought of wigmaker Martial Corneville. (Byrne knew him because of his work with Glenn Close, her costar on “Damages.”)

His process involves making a plaster cast of someone’s head, as you would to build prosthetics, and using it to create a customized wig form that can be used for meticulous day-to-day styling on set. “What that allows for is an exactitude — someone’s head, their hairline, where their ears are in a form that’s three-dimensional,” said Morgan.

She started by putting together an image board, pulling as many references as possible. The goal was not just to include photos of Steinem head-on, looking perfect. Instead, Morgan said, she looked for different contexts and an array of angles — from the back, from the side, in movement. In addition to still photos, she pulled videos of Steinem speaking.

Three different wigs were created for the Steinem character — one for young Gloria in a flashback; a long, highlighted wig worn by Gloria throughout the early ’70s; and a darker, slightly shorter wig worn later in the series.

It was important to Morgan to get the texture right — hair that tended to get a little frizzy and would have been ironed straight in the early ‘70s. “I asked to have a body wave put into it so it would go frizzy. I knew we would be in the humidity of Toronto. It needed to look

real.” (In contrast, Blanchett had an immobile, helmet-like wig — designed by Kerry Warn and made by Peter Owen — to play traditionalist Schlafly.)

Once Corneville created the Steinem wig, Morgan fine-tuned the cut, taking out some volume so it wouldn’t overwhelm Byrne’s face. “It was a lot of hair, and when we first put it on Rose, we were like, ‘Get the razor in there, and just cut the [expletive] out of it really so that it moves,’” she said.

There was also the matter of Steinem’s trademark highlights. Morgan gave Corneville specific instructions about the colors to use in the wig, then tinkered to make them pop. But it had to be subtle. “I needed it to not look like a balayage, or a contemporary chunky highlight. It was very delicate. There was a diffusion so it wouldn’t look skunk-like.” 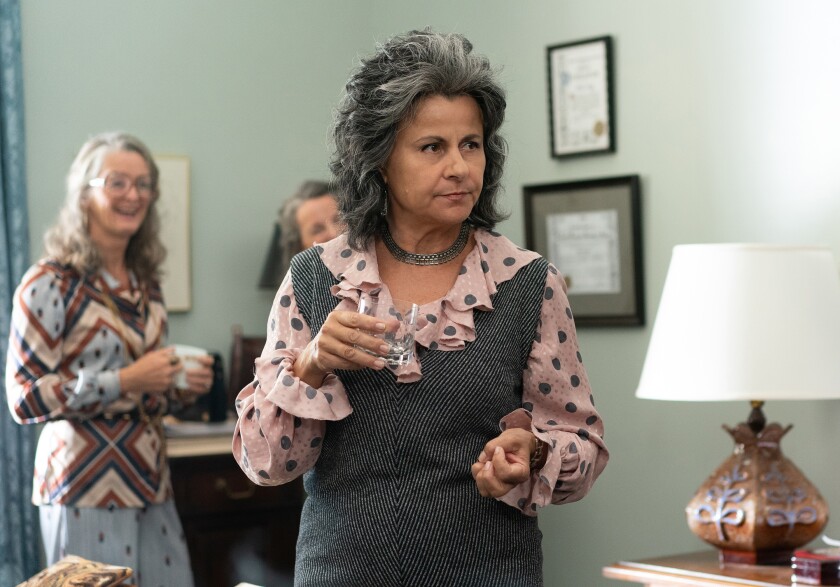 “I love Betty Friedan’s hair, because it feel like it had a grounded earthy quality to it,” said Morgan, noting that Friedan, though not considered conventionally attractive, seemed to have fun with makeup and hairstyles and presented herself with playful confidence. “I thought she was beautiful.”

In fact, for budget and continuity reasons, they couldn’t quite keep up with the pace of her hairstyles in the ’70s: “We didn’t change Betty’s hair as much as Betty changed her hair,” Morgan said. In a devastating twist, Betty’s third wig — estimated cost: $9,000 — was lost by FedEx. The production even sent someone to North Carolina to attempt to retrieve it, to no avail. “It was a travesty,” Morgan said. 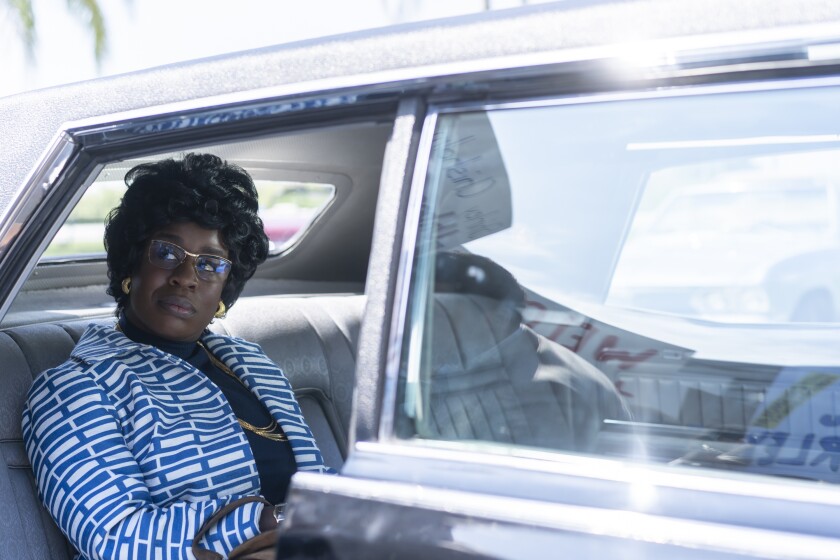 Morgan was struck by the short, top-heavy wig that Chisholm began wearing during her historic run for the White House in 1972. “We call it a helmet not so much because it was a helmet but because it was kind of like an instant persona. It made her taller and more of a presence in the room. I thought that was really interesting. Hair is such a psychological study of a person,” she said, pointing out that Chisholm opted to wear a wig at a time “when the natural hair movement was identified with Black Panthers.”

Since Chisholm was the only character who regularly wore wigs in real life, Morgan shopped for wigs in Los Angeles and New Orleans. She also worked with wigmaker Victoria Wood to create a gray wig worn by Aduba during a scene in which Flo Kennedy (Niecy Nash) visits a dejected Chisholm, under investigation by federal authorities and still hurt by the lack of support from the women’s movement during her presidential campaign. “We wanted to be respectful of her strength and showing her with her natural hair was not a negative thing, it was her in her most honest, vulnerable place, having a conversation with her close friend.” 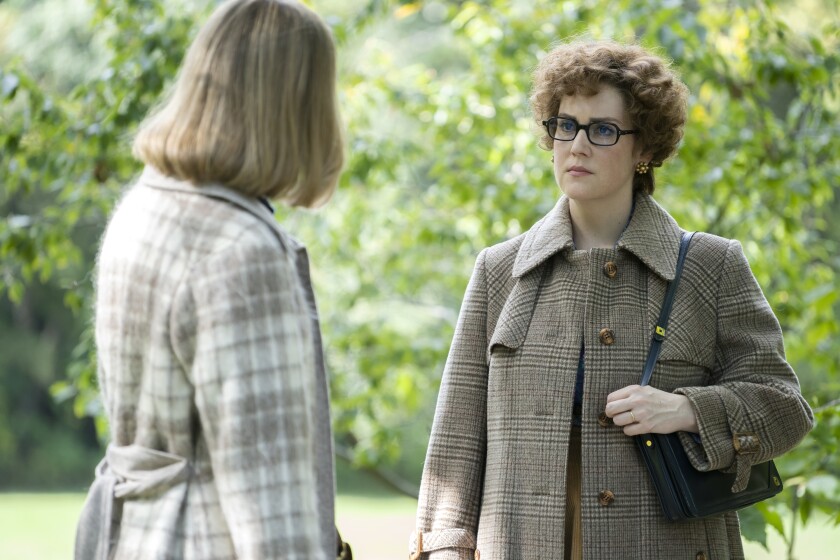 Morgan said the poodle-like wig worn by Melanie Lynskey while portraying the lesser-known ERA opponent was her favorite.

Perhaps that’s because the short, functional look was inspired by her mom’s hair during the time period portrayed in “Mrs. America.” She even asked her mother for pictures from when she was pregnant with her brother and frazzled-looking in the early ‘70s, but only recently told her why.

“I love that hair, because it looks completely real,” Morgan said. “Remembering what my mom’s hair was like when I was growing up — it’s good that it’s flawed.”