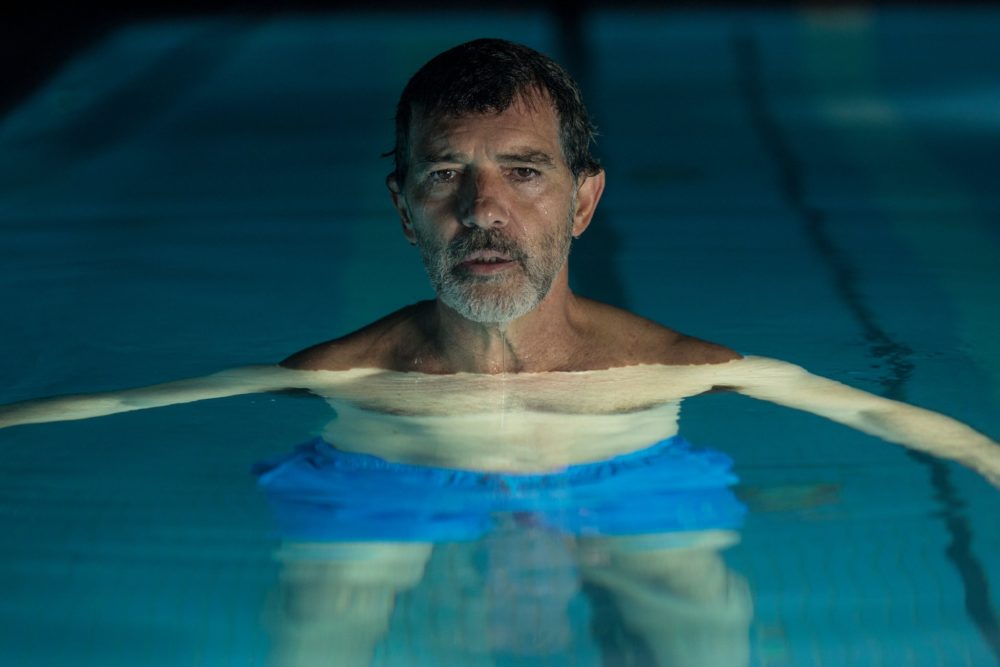 “Pain and Glory” is writer-director Pedro Almodóvar’s 21st feature film. It’s also his most confident and serene. The bad boy melodramatist from Madrid turned 60 last month, and this is the kind of picture an artist makes when they’re getting on in years and taking stock of things. The tale of an aging, ailing filmmaker who’s run out of stories to tell is Almodóvar’s trek into semi-autobiographical territory — in the vein of Fellini’s “8 ½” and Fosse’s “All That Jazz” — with frequent collaborator Antonio Banderas starring as his alter ego, a renowned film director named Salvador Mallo whose spiky hair and sneakers might look familiar to world cinema buffs. (He lives in a replica of Almodóvar’s actual apartment, and in some scenes, Banderas is even costumed in his director’s own clothes.)

The film fluidly slips back and forth between today and Salvador’s childhood in the 1960s, dirt poor and wide-eyed, washing clothes in the river with his tough-as-nails mother (Penélope Cruz, naturally.) But present-day Salvador is a sunken wreck, laid low by all sorts of chronic ailments from spinal problems to acid reflux and can barely drink a glass of water without choking thanks to what his doctors call “a series of ossifications we don’t fully understand.” Nobody can work a metaphor quite like Almodóvar, and “Pain and Glory” is his attempt to crack the psychological ossifications that match the character’s physical disrepair.

It’s a gentle, episodic movie about mending fences and making peace, and how part of getting older is realizing there are some things you should apologize for and some you still shouldn’t. The very funny first segment finds a local cinematheque hosting a restoration of Salvador’s breakthrough film, a raucous-looking sex comedy called “Sabor,” the filming of which prompted a 30-year feud between the director and his heroin-addicted leading man, Alberto (Asier Etxeandia). Their testy reunion culminates in a hilarious sequence that feels like Almodóvar’s revenge on three decades of awkward post-screening audience Q&A sessions, and does raise the question of how filmmakers manage to get through such events without snorting smack.

But Salvador’s reconciliation with Alberto is just the beginning, prompting a deeply moving reminiscence of a doomed affair back in the heady 1980s, a heartbreak we see transfigured into art. Pain into glory, as it were. Almodóvar boldly allows an entire theatrical monologue to play out uninterrupted while indulging the idea of an empty movie screen as a blank canvas upon which the young Salvador could project his dreams and deepest fears. The entire sequence becomes a dazzling hall of mirrors, with Alberto standing in for Salvador — who, mind you, is standing in for Almodóvar — when discovered by the real-life inspiration for a semi-autobiographical stage

production. (In a tip of the hat to the film’s Fellini-esque ambitions, a fictional character named Marcello has a real-life analogue named Federico.)

This would all probably seem a bit masturbatory and more than a little confusing were it not for the complete command Almodóvar exhibits over the material. In watching his last film, 2016’s little-seen “Julieta,” I noted that over the years he’d developed an offhand, almost casual mastery of the frame, never wasting a shot nor belaboring a point. The blindingly bright, primary colors (once again courtesy of longtime cinematographer José Luis Alcaine) still dictate the movie’s moods and emotional temperature, though the films have grown considerably less manic. Almodóvar first got our attention with “Women on the Verge of a Nervous Breakdown,” while this one’s more like “Men on the Verge of Melancholy Acceptance.”

It’s a triumph for Banderas, who in his ninth collaboration with Almodóvar goes to places I honestly didn’t think the actor had in him. Gone are the swagger and athletic brio — that lusty playfulness that made him the closest thing the movies had to a living cartoon character — replaced here with a forthright tenderness and broken humility. He’s achingly open and exposed, a larger-than-life performer who’s never before been so tiny and frail. (At the New York Festival press conference I attended, he only half-jokingly confessed that having a heart attack two years ago turned out to be excellent preparation for the role.) Banderas won Best Actor at Cannes and will presumably be collecting many more awards in the coming months. Deservedly so, as it’s the kind of performance that makes you feel like you’re seeing a familiar face for the first time.

I wasn’t as hot on the film’s later stretches, during which Salvador comes to terms with the passing of his disapproving mother, played as an old woman by Julieta Serrano. But Almodóvar has one more masterful metaphor up his sleeve, with the discovery and display of a lost watercolor painting taking on an almost mythological heft, speaking volumes in the subtext about how art needs to be shared with the world in order to inspire (and maybe even save) lives. It turns out that the movie has a very good reason why Penelope Cruz and Julieta Serrano look nothing alike, and when it’s revealed I dare you not to cry.

“Pain and Glory” opens at the Coolidge Corner Theatre on Thursday, Oct. 17, and the Kendall Square Cinema on Friday, Oct. 18.

2 Corinthians 3:16-18 Transformed from Glory to Glory