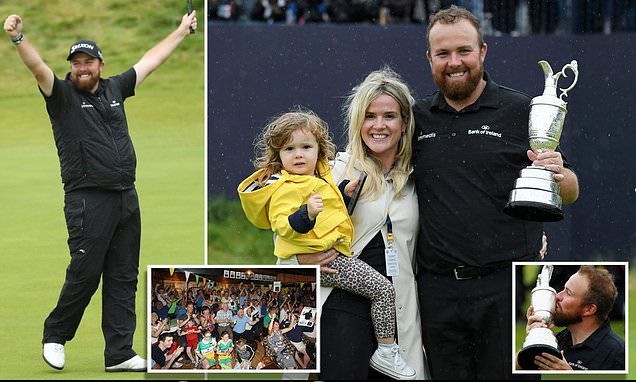 Irishman Shane Lowry has won the 148th Open Championship after battling torrid weather conditions at Royal Portrush to seal his victory with a six-shot lead.

The ‘lazy’ golfer, who was teased about his weight and once said he wished he was a rock star, was enjoying a five stroke lead over England’s Tommy Fleetwood at 5.00pm. His fortunes threatened to dip as he made his fifth bogey of the day just minutes later, cutting his lead to three.

But Lowry came back fighting, extending his lead as he hit a birdie on the 15th to the sound of roaring appreciation from spectators at 5.36pm. He faces a battle against the elements as heavy rain and 16mph winds lash the course in Northern Ireland.

The down-to-earth sports star joked ‘that was so stressful’ after he emerged victorious on the tournament this evening.

As he hoisted the Claret Jug over his head, the emotional player wiped away a tear as he thanked his wife, Wendy, and daughter, Iris, for their support.

He told fans: ‘I love this place. It’s one of my favourite places in Ireland. To be able to come up here and play in an Open Championship is great.’

The star dedicated his victory to his mother and father as he praised them for the sacrifices his parents had made over the years.

Lowry poses with his nurse wife, Wendy, and their daughter, Iris, after winning his first major at Portrush in Northern Ireland this evening

Pictured: Shane Lowry kisses his trophy after sealing victory at the 148th Open Championship in Northern Ireland this evening

Lowry (pictured, right, after his win this evening, and, left, with wife Wendy and daughter Iris) became emotional as he wiped a tear from his eye in front of fans following his victory

Lowry, who has a daughter, Iris, with his nurse wife Wendy Honnor, has captured the public’s imagination with his down-to-earth approach.

recently admitted he uses Love Island to relax and added, ‘We’ve got a good Irishman on there now’. Now he faces the fight of his life to triumph against the elements to win a £1.5million payday.

Meanwhile Tony Finau hit a level-par 71 to secure third place – his best finish yet at a major golfing championship.

Of those out on the course former Open champion Stewart Cink and Dutchman Joost Luiten had three birdies in their first seven holes to get to three under for the tournament.

Fleetwood at a rainy Royal Portrush today, where the current light rain and 16mph winds give way to heavier downpours and 35mph gusts later on

Shane Lowry is pictured playing his second shot on the tenth hole at the Open Championship today in Portrush, where he is set to seal his victory this evening

Republic of Ireland golfer Shane Lowry (pictured) plays under grey skies in Portrush, Northern Ireland, where he is set to seal his Open Championship victory this evening

Thailand’s Kiradech Aphibarnrat was also three under for his round, although that was only good enough to get him back to two over. England’s Paul Casey enjoyed a good start to his 42nd birthday with two early birdies to return to level par.

It was a long way behind Lowry, on 15 under, but only four outside the top 20 with that likely to improve if the weather arrives as predicted.

Strong winds and rain meant the chances for the players hoping to catch Lowry – led by Fleetwood at 10 under and Lee Westwood at -7.

Lowry is facing a fight against the elements in Portrush, Northern Ireland, this evening but is closing in on victory despite the adverse weather conditions

Lowry with his wife, Wendy, and their young daughter, Iris, at the Abu Dhabi Golf Championships