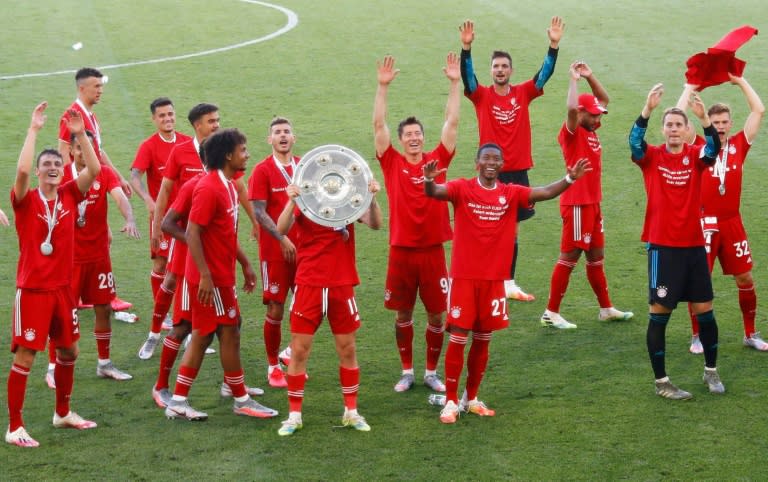 Berlin (AFP) – Bayern Munich are expected by the club’s own hierarchy to take the next step towards the treble in Saturday’s German Cup final before they attempt more Champions League glory in August.

“The team is in such good shape that they are able to win every title this season,” said Bayern president Herbert Hainer.

Before tackling Europe and a possible repeat of their 2013 treble, Bayern face Bayer Leverkusen in Berlin in Saturday’s Cup final having already lost to the Werkself this season.

Bayern are expected to secure the league and Cup double for the 13th time.

“We’ll tackle everything, those are our goals,” said Bayern head coach Hansi Flick, who only took over mid-season.

“At Bayern, you always think a bit bigger. First the Cup is in focus and then it’s important the team has some time off and the staff can clear their heads.

“After that, we’ll prepare intensively for the Champions League.”

Flick plans to send his players on a two-week holiday after the Cup final before a training camp ahead of their last-16 second leg against Chelsea on August 7 or 8.

in London, making Bayern among the favourites to be European champions.

Bayern could face a disadvantage against potential opponents in the Final 8 tournament in Lisbon, due to start on August 12, from leagues which are not scheduled to finish until late July.

La Liga runs until July 19, while the Premier League is set to end a week later, with Serie A not slated to come to a conclusion until August 2.

Only PSG and Lyon will have had less game time than Bayern and RB Leipzig, as Ligue 1 was ended early due to the coronavirus pandemic.

“We just have to make sure that we make the best of the situation,” Flick said.

“It could be an advantage because one or two players would be available again.”

Bayern’s forwards are in stellar form.

Thomas Mueller produced a Bundesliga record 21 assists this season, while striker Robert Lewandowski has netted 49 times in 42 games, including 11 in the Champions League.

Bayern have been European champions five times and two of their 2001 title-winning team are being groomed to take charge.

“In 2001, we won the Champions League together playing in jerseys, now we want to repeat that success with him in suits,” said Salihamidzic.

“Oliver feels the same way — we’ll give everything to see it happen.

What’s the story?: Money rolls in for debutant Mornington Glory at Bendigo