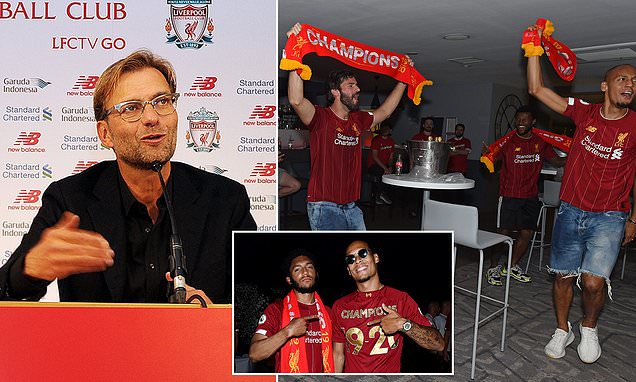 Mission accomplished! During his first press conference in 2015 Jurgen Klopp vowed to start a ‘new story’ at Liverpool built on a rock-solid defence… and his target of becoming ‘the hardest team to beat in the world’ has also come true after title win

By Joe Strange for MailOnline

If there was one person who always felt Liverpool would win the Premier League title under Jurgen Klopp’s guidance, it was the man himself.

The German’s dreams came true on Thursday night when Manchester City‘s defeat at Chelsea confirmed the Reds as champions for the first time in 30 years.

But if Klopp’s very first press conference at Anfield is anything to go by, the former Borussia Dortmund boss had been expecting to win the trophy for some time.

During his official unveiling on Merseyside back on October 9, 2015, Klopp made a series of comments and promises which have all since come true.

Speaking to the media after signing a three-year contract to replace Brendan Rodgers, he vowed to restore belief at the club as there was ‘too much doubt’.

Klopp also insisted that it was time to stop reflecting on the club’s trophy-laden history and instead focus on writing a ‘new story’ full of present-day success.

The ex-Mainz manager even predicted that any future glory would be built around a rock-solid defence – something he quickly put in place with the £75million signing of Virgil van Dijk in January 2018.

And Klopp also suggested that his new side could even go on to become ‘the hardest team in the world to beat’ if they developed in the right way.

It would be hard to argue that any of the 53-year-old’s words have failed to come true, with the Reds now the reigning English and European champions having won the Champions League last season.

‘They all celebrate the game and there is a fantastic atmosphere in the stadium. But they don’t believe at the moment. They only see five years ago, 10 years ago, 20 years ago.

‘History is great. But only to remember. Now we have the possibility to write a new story if we want, but we have to clear a few things and maybe we can do this and be as successful as we can be.

‘I am not saying this year will be the most successful in the history of Liverpool FC. If it happens then we can celebrate it, but if not we have to work.

‘But nobody starts with the possession.

‘That’s the first thing. When you start at a new club no-one starts from the top of the table. Only a few teams. You always have a little bit lower position, and our position is absolutely okay but we can start our development today.

‘If it’s possible, can we be the hardest team to beat in the world?

‘If you can try to be this it’s not such a faraway thing to maybe be a team who can win games.

‘First of all we have really to talk with all LFC fans and talk about what our expectations are, because expectations can be a real big problem. It’s like a backpack with 20 kilos more. It’s not so cool to run with this.

‘We have to think about this then we can start.’