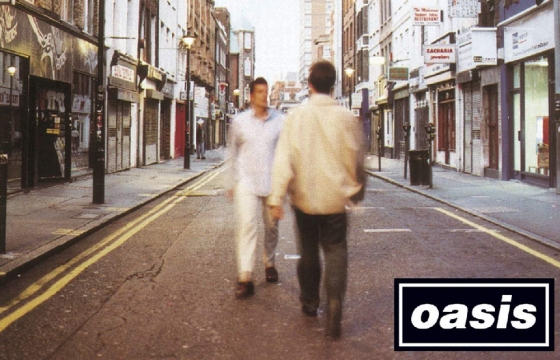 Our weekly segment, Juxtapoz Sound and Vision, explores a piece of substantial album artwork every Sunday to look at one of the primary ways musicians and visual artists collaborate. Many popular album covers become iconic pieces of pop art, and they’re a great excuse for us to share some favorites along with the visual components that make an album memorable.

Well, we thought to ourselves, what is in most opposition to last week’s Sound and Vision, All Eyez On Me? Our conclusion? The classic 1995 Britpop album (What’s the Story) Morning Glory? by Oasis, that bookends a legendary two-year run for Oasis, from young upstarts in Manchester with Definitely Maybe to perhaps era-defining heights of Knebworth at the tail-end of the Morning Glory tour. Oasis played for two nights and a quarter-million people, where 4% of the Brits actually applied for tickets! Insanity. And the funny thing is, notorious as Liam and Noel Gallagher were in the US for their brotherly fights of iconic tunes such “Wonderwall,” “Don’t Look Back in Anger” and “Champagne Supernova…” did emerge amid the scuffles. I don’t care who you are, you know the lyrics to these songs, which don’t even feel like they existed in a time, but in a Beatles-esque singalong status.

Who cares if the brothers fought? They played good songs, played them loud, loved their cigarettes and alcohol (and copious amounts of drugs) and were having the time of their lives. And you could tell! I was a 13-year old boy in suburban California the first time I heard “Live Forever,” “Supersonic” and “Cigarettes & Alcohol” from Definitely Maybe, and I wanted to be a rock star. Fuck being sad and moppy, I wanted to feel Supersonic, whatever the hell that meant. But what is great about this mid-1990s Britpop era were all the

bands you could get into at the time: Blur, Pulp, early Radiohead, PJ Harvey, Verve, Suede, Chemical Brothers, Manic Street Preachers… just a great time for British music. Oasis was front and center, signing about Wonderwalls and “slowly walking down the hall, faster than a cannonball.” What? Exactly, just singalong.

The cover of (What’s the Story) Morning Glory? was shot by Michael Spencer Jones on Berwick Street in Soho, London, a street known for its independent record shops. Oasis had graduated from the apartment cover shoot of their debut and were now in the center of London, with massive stadium anthems ready to go. The two men shown walking on the cover are art director Brian Cannon (back to camera) and  DJ Sean Rowley, with Morning Glory producer Owen Morris in the distance. Research shows that the album cover cost £25,000 to make, probably cheaper than the royalties Noel had to pay for ripping off T. Rex a few times. Again, something about this cover just works. The Oasis logo felt classic even on album two. The two figures passing on the street look so 1995.

I think most people, Noel Gallagher included, thinks the band should have taken a break or even broken up after Morning Glory and Knebworth. They were never going to top any of it, and to be fair, not a lot of bands had a two-three year run like Oasis did in the mid-1990s. Even if you hate them, you know them. And if you love them, it’s because of the incredible songwriting burst from Noel, singles and b-sides included. Blur and Pulp may have won the arty game, but Oasis made you want to pick up a guitar and learn that 4-chord intro to “Wonderwall.” What’s a Wonderwall, anyway? —Evan Pricco