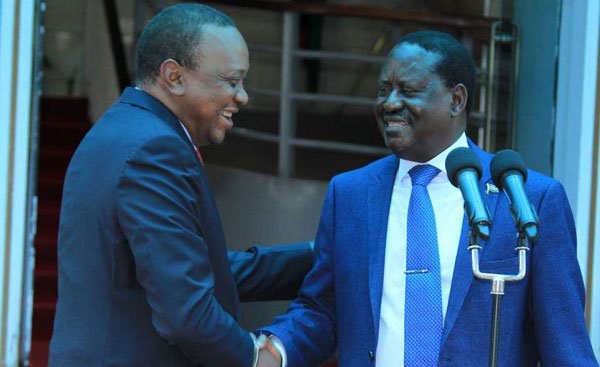 Nairobi — The proponents of the handshake-President Uhuru Kenyatta and former Prime Minister Raila Odinga-are in the US, basking in the glory of their March 2018 initiative that ended their political enmity following a disputed presidential election.

The two leaders joined hundreds of guests at the US National Prayer Breakfast in Washington DC on Thursday, where they were invited to speak about the Building Bridges Initiative (BBI)-a peace initiative they are spearheading in the country to entrench inclusivity.

At the breakfast attended by US President Donald Trump, the Kenyatta and Odinga spoke extensively about Kenya’s electioneering period, which is often marred by bloodshed, ethnic violence and political tension-often leading to deaths and population displacement.

They were invited to speak about what inspired them to come together and how it has worked in uniting a country synonymous with violence during elections, the worst being in 2007 when more than 1200 people were killed and half a million others uprooted from their homes, in what led to charges against President Kenyatta and five others, among them his Deputy William Ruto, filed in The Hague-based International Criminal Court (ICC). They were all acquited for lack of evidence.

“They spoke about the negative effects divisive politics have on the growth of the economy and about their quest to work together to unite the country through the BBI,” State House said.

While the intention is noble according to the President and Odinga, it has sparked political fireworks, with a section of leaders loyal to the Deputy President claiming the move is part of a wider plot to sideline him and eventually block his bid to succeed President Kenyatta in 2022.

The BBI report is likely to lead to a national referendum to change the Constitution, effectively introducing the post of Prime Minister and other seats in a move aimed at ensuring that the winner [in a presidential election] does not it all as is the case under the current system of government.

But Ruto’s allies have interpreted this to mean, the PM’s post is being created for President Kenyatta who is constitutionally barred from running for the top seat at the end of his second and final term in office.

They also believe that it is also a plot to propel Odinga to the top seat “through the back-door”.

Both President Kenyatta and Odinga have dismissed these claims, saying “BBI is about the people and the country’s unity.”

In the US, the President met several players in global politics, where he explained to them more about BBI.

Among the leaders President Kenyatta met is US Senator Jim Inhofe, at the Russell Senate Office Building in Washington DC.

Senator Inhofe commended President Kenyatta’s efforts in uniting the country through the BBI.

Get the latest in African news delivered straight to your inbox

We need to confirm your email address.

To complete the process, please follow the instructions in the email we just sent you.

There was a problem processing your submission. Please try again later.

Earlier, the President spoke at an event hosted by the Atlantic council- an American think tank on international affairs, where he said Kenya “is currently engineering its own homegrown solutions to political, social and governance challenges facing the country through the Building Bridges Initiative.”

He said the US and the world at large have a lot to gain by making Africa work for its people.

“We must begin to look at Africa as the world’s biggest opportunity if you can dare look at it with a fresh eye and a sense of history. And Kenya is a key country in converting that opportunity into mutual gain,” he said.