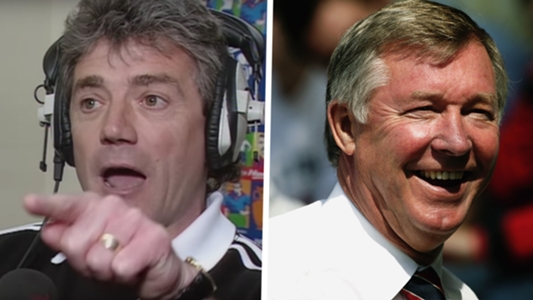 Mind games are so tightly woven into football nowadays that almost any pronouncement could be construed as forming part of a broad psychological offensive.

Jose Mourinho is considered a master of the trade, having regularly deployed curious techniques of unnerving rivals during the course of his career, while Jurgen Klopp recruited a dedicated psychologist to his backroom staff in order to help manage mental matters.

However, one of the standard bearers for the dark art of getting into the heads of opponents was Sir Alex Ferguson and his subtle needling of Kevin Keegan endures as an example of how effective it can be, as Keegan famously lost his cool then, ultimately, the Premier League title.

Goal looks back on Keegan’s furious tirade and brings you everything you need to know about the notorious incident, including a full transcript of the conversation.

When was Kevin Keegan’s ‘I will love it’ rant?

It was the Magpies’ third-last game of the league campaign and the win was their third in succession, setting them up for their final two matches against Nottingham Forest and Tottenham.

What was Kevin Keegan’s ‘I will love it’ rant about?

Keegan’s ‘I will love it’ rant was a manifestation of his ire at comments made by Manchester United manager Alex Ferguson as the race for Premier League glory approached a conclusion.

Ferguson stoked tensions when he cast doubt on the commitment of the likes of Leeds and Nottingham Forest to try as hard against Newcastle as they did against his Manchester United team, suggesting that Forest – who were due to play the Magpies for Stuart Pearce’s testimonial – might even let Newcastle win.

Keegan was incensed and, when the opportunity arose after his side’s hard-fought win over Leeds, he could not contain his fury. So, when it was put to him in an interview with Sky Sports that such comments were simply part of the psychological battlefield, what did he say?

“No, no… when you do that with footballers, like he said about Leeds, and when you do things like that about a man like Stuart Pearce, I’ve kept really quiet, but I’ll tell you something, he went down in my estimation when he said that,” declared Keegan, with a sense of righteousness.

“We have not resorted to that, but I’ll tell you, you can tell him now if you’re watching it, we’re still fighting for this title, and he’s got to go to Middlesbrough and get something, and… and… I’ll tell you, honestly, I will love it if we beat them, love it!”

Unfortunately for Keegan, things did not work out as he’d hoped as his side could only manage a 1-1 draw against Forest. A few days later, the Red Devils went to Middlesbrough and recorded a routine 3-0 victory. Newcastle then drew 1-1 again in their final match of the season against Tottenham.

Keegan’s ‘I will love it’ rant is regarded as a defining moment in the history of the Premier League, serving as an emblem for Newcastle’s unbelievable capitulation to Ferguson’s Manchester United in the 1995-96 season. The Magpies surrendered a 12-point lead to the Old Trafford side and ultimately finished four points behind their rivals.

Of course, while things began to heat up in the final stretch, Keegan may reflect on his side’s meetings with Manchester United as the decisive moments, since they lost both home and away. Nevertheless, it is the rant that will be most remembered.

Watch Kevin Keegan’s ‘I will love it’ rant

Kevin Keegan ‘I will love it’ rant: Full transcript

Keys: Three weeks ago we saw you and you were absolutely devastated and I think a lot of people felt for you. How do you feel tonight?

Gray: What was the first 15 minutes like for you Kevin, anyway?

Keegan: I didn’t think we played very well at all, first 15 minutes. I was disappointed because looking at the lads I got the feeling they were really up for it, but we then started to… once we got the goal, we started to play a bit and then second half, I mean, we never really got passing it, we gave it away, players that

normally don’t give it away were giving it at away, and at the end I said to Terry (McDermott), ‘1-0 will do it tonight’.

Keys: Why was all that happening Kevin, do you think? Tension on the night?

Keegan: Yeah, I don’t think you can discount it. I mean, we just want to keep our hopes alive, and a lot of things have been said over the last few days, some of it almost slanderous, and we’ve never commented, we just got on working, trying to pass the ball like we do in training…

Keys: What do you mean by that? That people have been having a go at you and your team?

Keegan: No, no – I think things have been said about… I think you’ve got to send Alex Ferguson a tape of this game, haven’t you? Isn’t that what he asked for?

Gray: Well, I’m sure if he was watching it tonight Kevin he could have no arguments about the way Leeds went about their job and really, they tested your team.

Keegan: And we’re playing Notts Forest on Thursday, and he objected to that. Now, that was fixed up four months ago, we were supposed to play Notts Forest, I mean that sort of stuff, we’re bigger than that.

Keys: That’s part and parcel of the psychological battle isn’t it, Kevin?

Keegan: No, that’s… when you do that with footballers, like he said about Leeds, and when you do things like that about a man like Stuart Pearce, I’ve kept really quiet, but I’ll tell you something, he went down in my estimation when he said that. We have not resorted to that, but I’ll tell you, you can tell him now if you’re watching it, we’re still fighting for this title, and he’s got to go to Middlesbrough and get something, and… and… I’ll tell you, honestly, I will love it if we beat them, love it!

Keys: I mean, quite plainly the message is it’s a long way from over and you’re still in there scrapping and battling, and you’ll continue to take any of these, just as long as you continue to get the results.

Keegan: I think football in this country is so honest, and so, honestly, when you look sometimes abroad you have your doubts, but it really has got to me, and I’ve voiced it like, not in front of the press or anywhere, I’m not even going to the press conference, but the battle’s still on. Man United have not won this yet, not by any means.

Gray: Kevin, talking about tonight because it was such a huge game for you and your players, they all must have realised, everyone at the club must have realised the importance of the result tonight. In that context, what was the most pleasing thing in your team’s performance, do you think?

Gray: We’re getting used to that, I’ll tell you. Did you know that that’s your seventh 1-0 victory this season?

Keegan: It’s a club record three clean sheets on the trot (laughs) – while I’ve been here, anyway. But you know, sometimes you can’t all be generals. When David Ginola and Peter Beardsley and people like (Faustino) Asprilla and Les Ferdinand and Robert Lee are turning it on, the other people have been passed by. But you know, they questioned our defence – our record’s equal to anybody’s, really, in this league. But when you’re at the top, everybody’s been having a pick at things, but I think people like Philippe Albert and Steve Watson and Darren Peacock tonight and young Robbie Elliott have done great.

Gray: Yes, your back four did perform well. What’s it going to be like on Thursday for you, with all these players back available? You have a selection dilemma, surely, for the first time in a while?

Keegan: Yeah, we’ve had a few injuries, but nothing major, and we’ve always had people like Keith Gillespie to come in for David Ginola. I think it goes without saying David will come back, but as for who makes way, I’ll have to hope that someone picks up a strain (laughs).

Keys: Well Kevin, thanks once again for joining us.