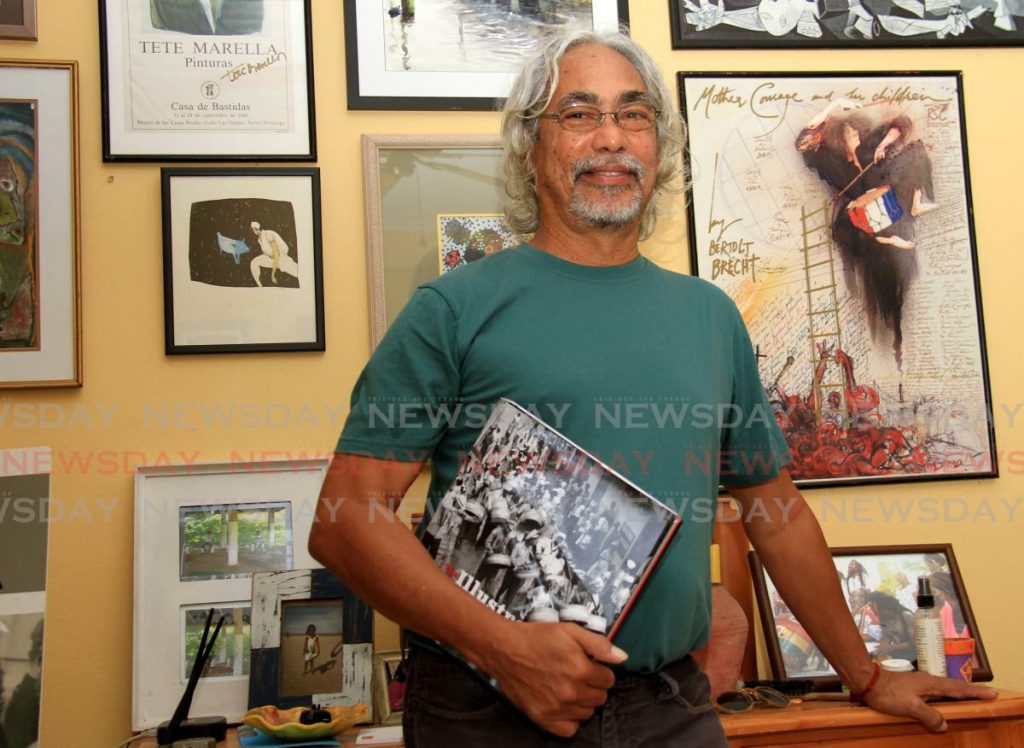 Dr Kim Johnson says although there are more steelbands abroad, the power and glory of the steelpan can only be experienced in Trinidad and Tobago. Photo by Ayanna Kinsale –

While it may not be an academic textbook, The Illustrated Story of Pan is possibly the most comprehensive and accessible history of the steelpan.

Written by the former director of the Carnival Institute of TT, Dr Kim Johnson, the book is a collection of hundreds of pictures as well as interviews with pan pioneers, many of whom have died, conducted by Johnson over the decades.

First published by UTT in 2011, The Illustrated Story of Pan gained good reviews and sold out fairly quickly. Johnson explained to Sunday Newsday he got requests for copies from booksellers all over the world every year, so he decided to produce a second edition.

“I decided to reprint, make any corrections, change the design of the cover, and update the last chapter, where I looked at steelpan in today’s context. It all took about a year to complete.”

He explained that he attempted to grapple with the problems facing pan in TT, including “the delusions of people of influence,” and discussed how some of the issues could be addressed.

He said pan was extremely popular in its heyday and everyone wanted to be involved in some way. Now, many young people were not interested in pan. A lot of them were paid to play and if they did not get their money, they would walk away. 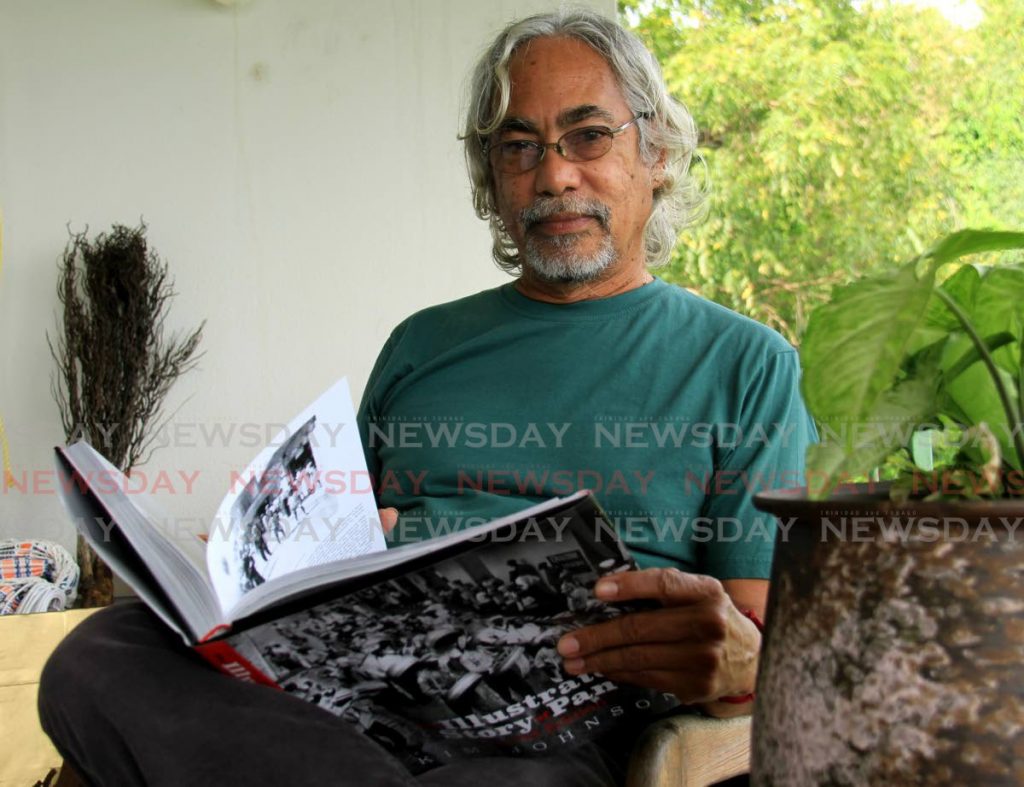 Dr Kim Johnson with a copy of the second edition of his book, The Illustrated Story of Pan. Photo by Ayanna Kinsale –

“That means what is supporting all these steelbands is government subventions and sponsorship by companies. Effectively, steelpan is on life support. If that money is taken away, the patient would be terminally ill.

“It is important to accept that reality before it can be addressed.”

He also discussed the rise of pan in school, as well as the relatively new development of the popularity of the rhythm section, since a lot of the arrangements had become too complex for people to dance and have a good time.

The second edition was printed in China to reduce costs. He described it as a large coffee-table book with coloured pictures. He printed 1,500, with half to remain in TT and the other 750 to be sent to the US, as most of the people who supported its printing were in that country.

Johnson said there were about 2,000 steelbands in the US, made up mostly of Caucasian students in high school, and universities, and they did not know the history of the instrument.

While he was recently asked to give lectures at both Princeton and New York universities, most people who want to study pan chose the Northern Illinois University to study under Trinidadian professor Liam Teague. He called it a “terrible state of affairs,” because what is taught is an “offshoot of 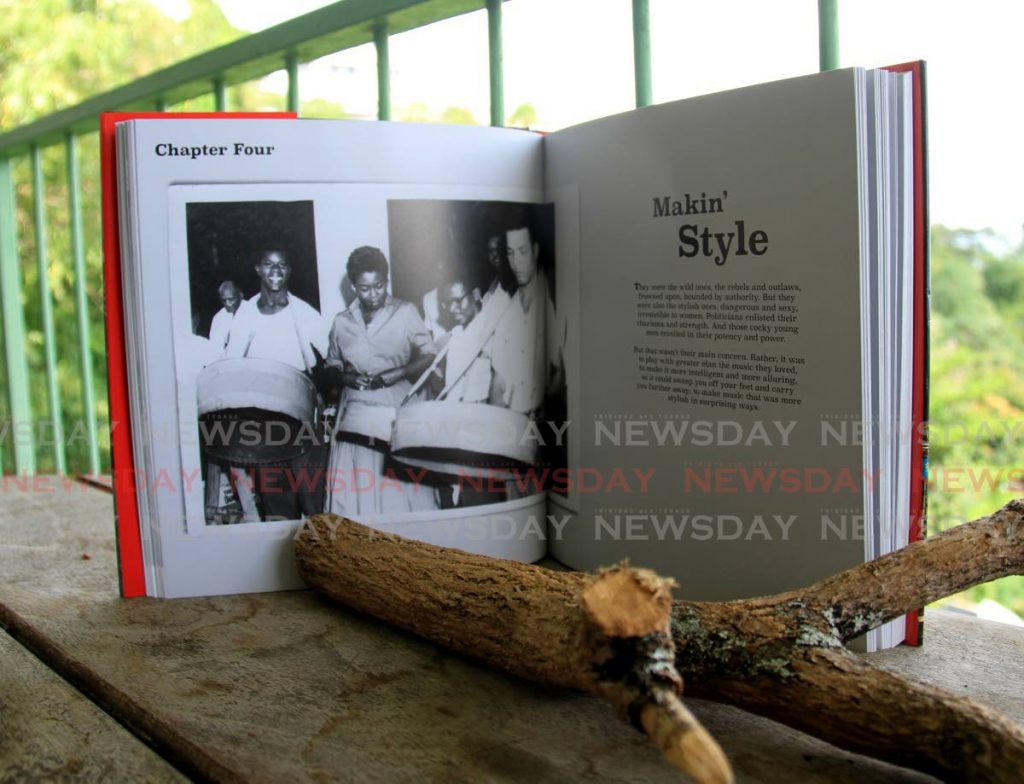 The Illustrated Story of Pan (second edition) is a comprehensive history of the steelpan. The book is written by the former director of the Carnival Institute of TT Dr Kim Johnson. Photo by Ayanna Kinsale –

Part of the reason he wrote the book, his fourth, he explained, was to brand TT as the home of the steelpan: there were more bands outside than in the country so he wanted to “stamp TT on pan,” as it still has the greatest bands in the world, with the best arrangements.

“You can only experience the power and glory of the steelpan in TT. You can only hear a full 120-member band here. I will go further, to say to fully experience pan, you have to be able to go in a panyard and hear them when they practise. That camaraderie, that vibe, that experience, is unique. When you go, you are integrated into the band.”

In the ten years between editions, he has produced several films on pan, including Pan – Our Music Odyssey, which was translated into several languages and screened around the world.

In addition, while at the Carnival Institute, he organised a workshop for educators on steelband pedagogy and how pan should be taught. He believed the approach to teaching pan, what is taught and when, could revive the movement. He said the way music was taught in TT was the European standard music approach, which usually used classical music to teach people how to read music. However, he said, for the average person, audiation may be more effective.

The total Music Education website describes audiation as “the process of both mentally hearing and understanding music, even when no music is present. In essence, audiation is thinking in music or thinking about music in a way that brain is able to give meaning to the sounds.”

The Illustrated Story of Pan (second edition) is a comprehensive history of the steelpan. The book is written by the former director of the Carnival Institute of TT Dr Kim Johnson. Photo by Ayanna Kinsale –

Therefore, he suggested students’ education should begin by teaching them to play songs they love and, in turn, they could learn to love the instrument, and progress from there. He said people who learn this way, although they may not become professional musicians, were more likely to play throughout their lifetime because they did it for the love of music.

Then, he said, tutors could teach improvisation. For example, when children learned to speak, they were not taught about verbs, pronouns, adjectives and so forth. They learned words, made up their own sentences, improvised, and then improved as they went to school and learned more. He believed this method would be easier for the student, and free them to be themselves.

The Illustrated Story of Pan can be found at Metropolitan Book Suppliers Ltd, Capital Plaza, Port of Spain; Paper Based at The Hotel Normandie, St Ann’s; as well as through Johnson’s blog, Santimanitay, at https://www.santimanitayblog.com/theillustratedstoryofpan.

Case cracked, says NIA: ‘Vaze did it for lost glory’