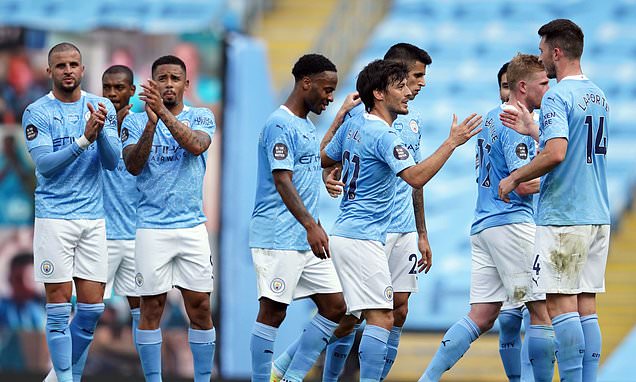 By Jack Gaughan for the Daily Mail

Manchester City‘s players have an added incentive of around £15million in collective bonuses as they hunt European glory.

City host Real Madrid at the Etihad Stadium on Friday as the Champions League returns, with Pep Guardiola‘s side in the driving seat to reach the quarter-finals.

They hold a one-goal lead after a 2-1 victory at the Bernabeu, earned in February before coronavirus halted the season.

A positive result at home against the Spanish champions would see them face Juventus or Lyon in the last eight in Lisbon on August 15.

Some of the club’s top players, such as midfielder Kevin De Bruyne, Sergio Aguero and David Silva, stand to earn in the region of £1m if

they lift the trophy.

City’s bonus structure is not, however, an old-fashioned ‘pot’ of money to be shared among the squad. Bonuses are individually stipulated in each player’s contract.

The Champions League is the only trophy yet to be won under Guardiola and City have never gone beyond the quarter-finals during his reign.

He has used team meetings to remind his players of perceived refereeing injustices in the three previous campaigns as extra motivation this time around. They are favourites this year — alongside Bayern Munich — ahead of the competition’s resumption and its conclusion in Portugal.

City’s players will be rewarded handsomely should they win the club’s first European silverware for 50 years. That quest starts on Friday, with Gareth Bale omitted from Real’s travelling party.

Eden Hazard is a doubt to as he has an ankle problem.

Meanwhile, Guardiola is planning for how best to narrow the gap to Liverpool next season, with the club on Wednesday night confirming the signing of defender Nathan Ake from Bournemouth for £40m, on a five-year deal.

Once upon a time in Counter-Strike « readmore.de