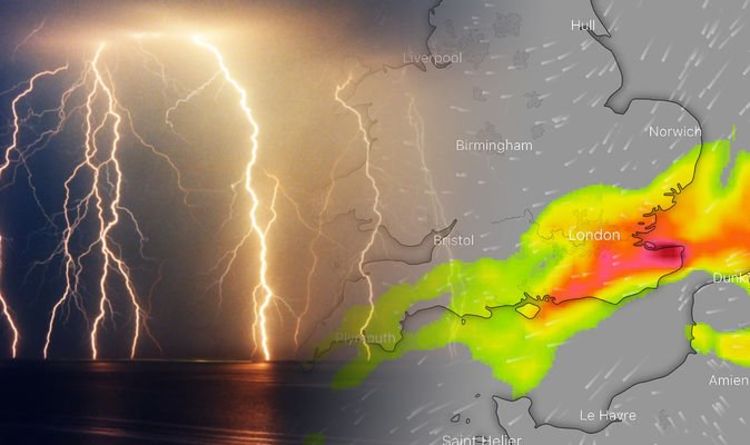 Express. Home of the Daily and Sunday Express.

THE UK has been hit by rough weather lately and several warnings, especially for thunderstorms, were issued by the Met Office last week. The forecasters are now warning “severe thunderstorms” could hit again this week.

The Met Office has warned thunderstorms could disrupt this week’s clear skies and warm temperatures as a heatwave enters the nation. The thundery weather will come towards the end of the week.

At the start of the week, the weather will stay unsettled across north-western parts of the UK.

However, it will be warm and dry with temperatures continuing to rise through the week.

Meteorologist at the Met Office, Alex Burkill, said there will be “something of a north-south split” in conditions on Monday.

Rain could be heavy in northern parts, while the south will mostly see sun and warm temperatures.

Mr Burkill said: “Monday will get off to a bright but chilly start for many parts.

“However, the rain and cloud across Northern Ireland will push across parts of Scotland, northern England as well as northern and western Wales.

“Further south and east it should stay dry and bright and sunny.”

Temperatures will build day on day as hot air is drawn in from the near continent.

Temperatures could be up to 33C across southeast England, while it should reach between 23 and 30C elsewhere across England, Wales and eastern Scotland.

As the week progresses, temperatures will rise.

“High pressure will dominate as we go through the rest of the week, bringing lots of fine weather and

also bringing in hot air. So temperatures are going to rise.”

However, changeable, cooler conditions seem likely to extend slowly east to all areas by next weekend, preceded by thunderstorms in places.

Deputy Chief Meteorologist, Martin Young, said: “By the middle of next week we’ll see temperatures across much of England and Wales widely climbing into the mid to high twenties Celsius and it will probably be hot in parts of southern and eastern England, as temperatures peak close to 30 Celsius.

“It’s possible Northern Ireland and Scotland will join the rest of the country in seeing a spell of warmer weather later next week, as this hot air from the continent extends northwards across the UK.

“We’re keeping a close eye on the possibility of severe thunderstorms developing later next week too, triggered by the warm continental air.”

There is wide agreement this week the heat will ramp up as hot air from the continent sweeps in.

UK weather latest: Britain to be hotter than Majorca as 32C sets in [FORECAST]

Paul Michaelwaite at Net Weather said: “The change will begin to occur early next week, as low pressure to the west of the British Isles and high pressure to the east combine to draw up much warmer air from the continent.

“The warmth will spread north quite speedily from Tuesday onwards, but the far northwest of the UK will have to wait for the longest to see it and ultimately is likely to be the first to see it end as well.

“The longevity of the fine, hot spell is quite uncertain at this point; it looks set to last until at least the end of the week, although by this stage some thundery downpours are possible in places.

“Into next weekend is when the breakdown looks likeliest to occur (right now), as cooler, less settled weather spreads down from the northwest, perhaps preceded by thunderstorms – but this is a long way off.”

Met Office: London could be hit by severe thunderstorms next week (Image: WINDY)

On Monday night, northwestern parts will be largely cloudy and mild, with occasional rain or drizzle.

Much of the south and east remains mostly clear, but perhaps a little chilly by dawn.

On Tuesday, it will be rather cloudy with occasional rain, perhaps heavy, for northern areas where temperatures will be lower.

England and Wales, away from western and northern fringes, should be sunny and very warm.

From Wednesday to Friday cloud and outbreaks of rain will enter the northwestern parts of the nation.

There is an increasing risk of thunderstorms on Thursday and Friday.

Most read in Weather

6 Ways You Can Put God’s Glory on Display