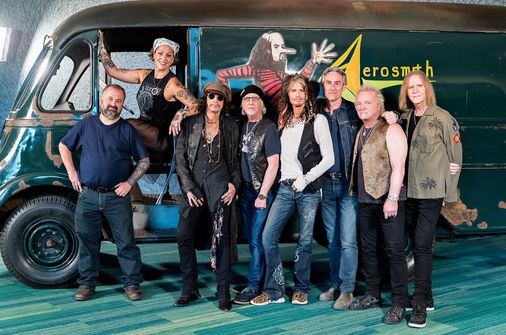 Members of Aerosmith were recently invited to walk this way to see their rusty old tour van — uncovered in the woods of rural Massachusetts — restored to something like its former groovy glory.

When Frank Fritz and Mike Wolfe got a tip about an abandoned van in Chesterfield, they weren’t expecting to find something that belongs in the Rock & Roll Hall of Fame.

Fritz and Wolfe, the stars of the History channel reality series, “American Pickers,” have labeled it “. . . the most incredible thing we’ve ever found in our lives.”

In an August 2018 episode of “American Pickers,” the Chesterfield property owner said the 1964 International Harvester Metro van was in the woods when he bought the land from Mark Lehman, Aerosmith’s former road manager.

(The owner had already returned a tape he’d found on the property to Steven Tyler, Aerosmith’s frontman. The tape was from a 1971 Aerosmith show at Lowell High School.)

The band’s founding member Ray Tabano
confirmed the van had been used by the group to get to small gigs in the New England area.

The vehicle features a cartoon figure on the side in the same pose as the old “Keep on Truckin’ ” comic, along with the name Aerosmith. After decades in the woods, it was, not surprisingly, in terrible condition. But when the band heard the van had been found, they offered to buy it back once

Since then, Wolfe, Fritz, and Tabano have worked on the van, which they purchased for $25,000.

In a July 8 episode of the show, the trio found an identical truck to use for parts. Anything that wasn’t restored was re-created from old photos, including an interior decorated in wood paneling. Once the work was complete, Wolfe and Fritz met up with Aerosmith in Las Vegas, where the band has been playing a residency at the Park MGM.

“[They] did such a great job making the van look like it did then,” Aerosmith guitarist Joe Perry said in the episode.

The band plans on incorporating the vehicle into their Vegas residency. (Aerosmith is scheduled to play four shows at the MGM Springfield in August.) Then they hope the van will end up in the Rock & Roll Hall of Fame in Cleveland.

Tyler says the van has tremendous sentimental value to him.

“That was the dream. To move to Boston, to live together and just write some songs. Since then, we’ve been living the dream. That’s what this van means to me,” Tyler said.