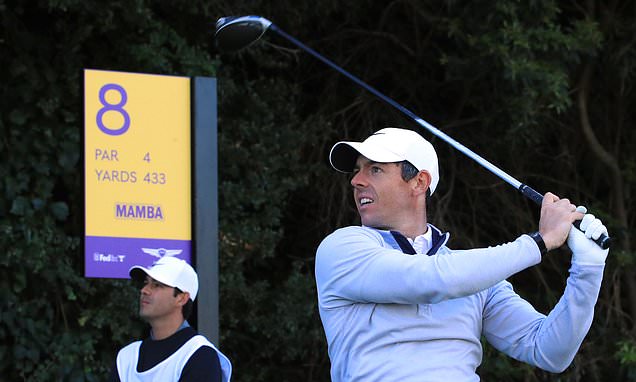 ‘All my focus is on winning events’: New world No 1 Rory McIlroy sets his sights on run to Masters glory

By Derek Lawrenson for the Daily Mail

Imagine having a local rapper chanting rhymes to a sizeable crowd as you prepare to play to the par three 16th at the Genesis Invitational pro-am.

This is about as far removed as it gets from the stuffy image so many have of the Royal and Ancient game.

‘Here’s Ror-ee McIlroy, what’s he gonna do, can he play under pressure yo?’ When McIlroy stops laughing, and the rapper stands to one side, McIlroy takes dead aim. ‘Oh my, he’s only gone and put it in the hole, bro,’ is the next line, to a stroke that never left the flag.

As his peers have discovered over the past six months, nothing, it seems, can distract McIlroy. On his phone, he has an app that removes all unwanted sites — and he is equally focused on the course.

We are here at Riviera, one of his top three pit-stops on the PGA Tour, at the start of a hectic run of seven tournaments in nine weeks.

‘The season starts here,’ he says, barely able to keep the excitement from his voice as he contemplates a run that he hopes will culminate in a long-overdue win at the Masters.

He sets out as the

new world No 1, but this is no time to dwell on it.

‘The first time I got there in 2012, I did so by winning the Honda Classic, so that was the euphoric moment,’ he told Sportsmail, between shots on the par four 15th. ‘Don’t get me wrong, it’s great to be back there but now all my focus is on winning events.’

He has no wish to lord it over the man he replaced, Brooks Koepka, other than a playful dig when asked about their rivalry. ‘Have we a rivalry? It feels all one way to me,’ he said, referring to comments the American has made on the matter.

The busy McIlroy schedule shows one notable addition from last year, as he will now play the week before the Masters in San Antonio.

‘I just want to keep busy,’ he revealed. ‘The previous week it’s the WGC-Match Play, and you can easily be going home on the Friday from there. That would be almost a fortnight of no competitive golf before the Masters and I don’t want that.’

In his bag, McIlroy has headcovers in tribute to the LA Lakers basketball star Kobe Bryant, who died in a helicopter crash last month.

‘Growing up in the other Holywood, I’m not a massive basketball fan, but that shook me to the core,’ he said.

McIlroy will begin early on Thursday hoping to make a statement in a tournament featuring nine of the world’s top 10. ‘The course, the field, the town, the fact Tiger’s hosting,’ he said. ‘All’s good, isn’t it?’