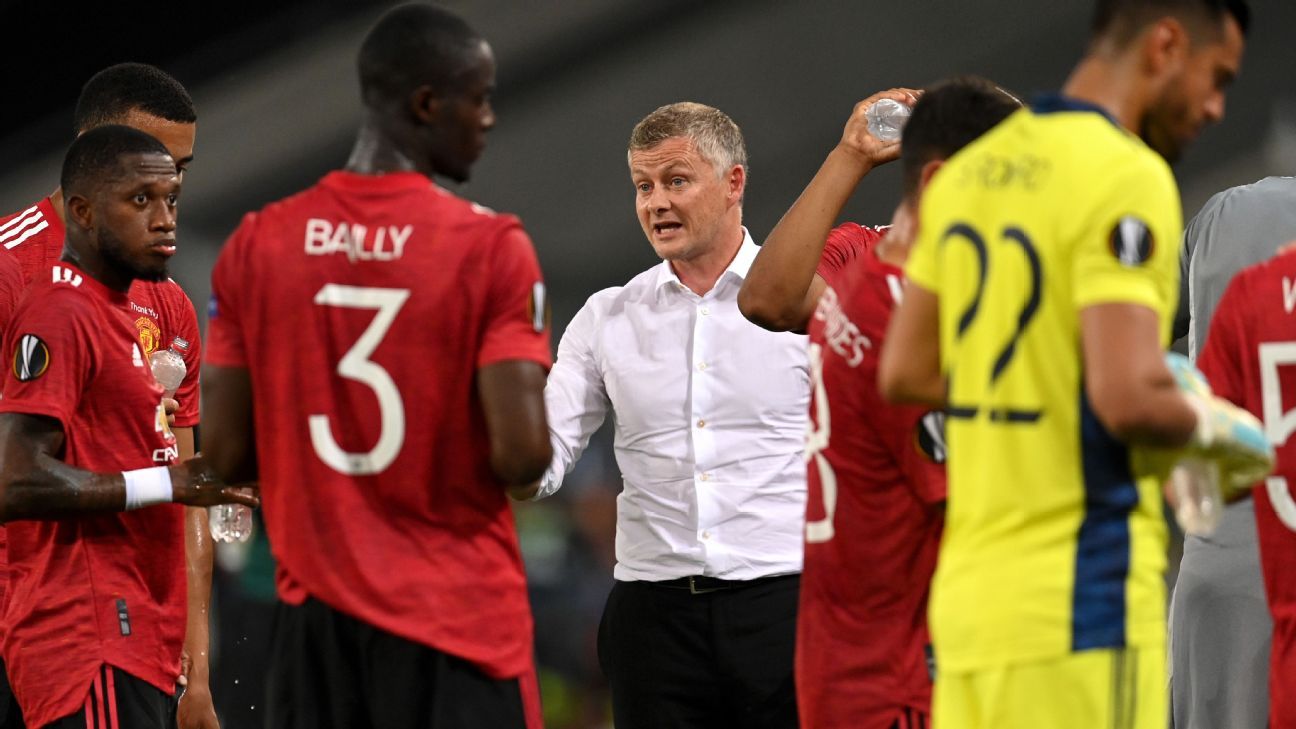 COLOGNE, Germany — The Europa League started as a sideshow for Manchester United and Ole Gunnar Solskjaer, but it is now centre stage.

It took a nervous, edgy 1-0 win over FC Copenhagen in Cologne on Monday night — earned thanks to Bruno Fernandes‘ penalty in extra time — but United are one game away from a European final and the chance to lift a first trophy since Jose Mourinho won this competition in 2017.

They will have to improve against either Wolverhampton Wanderers or Sevilla FC on Sunday if they want to return to the RheinEnergie Stadium for the final on Aug. 21.

“It’s the third time this season; we’ve been the semis in every competition we’ve been in,” said Solskjaer afterward. “I’m delighted to go through. I thought we deserved to win tonight. Hopefully, we can go a couple of steps further and win this one.”

Champions League football has already been secured courtesy of a third-place finish in the Premier League, but for Solskjaer, that does not mean the stakes in Germany over these next 10 days are any lower. The Norwegian coach has been at the club long enough to know that success is judged in silverware.

When the Europa League started in September — almost 11 months ago — it was not Solskjaer’s priority. Phil Jones, Marcos Rojo, Diogo Dalot, Axel Tuanzebe, Angel Gomes and Tahith Chong all started in a drab 1-0 win over Kazakhstan minnows FC Astana; but that was then, and this is now.

Man United will face Wolves or Sevilla in the Europa League semifinals on Sunday. Getty

The time for rest and rotation is over, and you only needed to look at United’s front six against Copenhagen to understand Solskjaer’s attitude about the final rounds of this tournament. Fernandes, Paul Pogba, Mason Greenwood, Marcus Rashford and Anthony Martial — the inspiration behind a run of six wins from United’s final eight league games to secure a top four finish — were all back against a Copenhagen side playing in their first even European quarterfinal.

In 10 previous attempts, the Danish side’s only victory against English sides came versus United in the Champions League group stages in 2006 — a game Solskjaer played in — but here they never looked like a team ready to roll over. Last-gasp blokes by Harry Maguire and Eric Bailly — in for Victor Lindelof — kept the score at 0-0, and although Greenwood converted United’s one clear chance right on the cusp of half-time, it was ruled out by the VAR.

At the break, it was difficult

to tell the difference between the team playing their 26th European quarterfinal and the one making their debut. It was a half after which Solskjaer might have secretly hoped Ed Woodward would just stump up the £120 million that Borussia Dortmund is asking for top transfer target Jadon Sancho.

But with the deal for Sancho seemingly off the table for now — and for all the huff and puff from Fernandes, Rashford and Martial — it was only really Greenwood who looked likely to score. After 55 minutes, the 18-year-old fizzed a left-foot shot off the inside of the post, but when Rashford tapped in the rebound he was offside.

Ten minutes later, Fernandes rattled the other post, prompting a barrage of shrill screams from Stale Solbakken on the Copenhagen bench. The sound echoed around the empty, 50,000-capacity home of FC Koln while the United subs rocked backward in their seats in the stands, hands on heads.

Copenhagen, champions of Denmark in 2019, could still sense a shock, and when substitute Bryan Oviedo, once of Everton and Sunderland, forced Aaron Wan-Bissaka into a crucial clearance on the line, Solskjaer had seen enough. On came Nemanja Matic and Lindelof for Fred and Bailly — two defensive changes in a game United had to win — in what was a hint, perhaps, that Solskjaer is not completely happy with his attacking options off the bench.

Dan Thomas is joined by Craig Burley, Shaka Hislop and a host of other guests every day as football plots a path through the coronavirus crisis. Stream on ESPN+ (U.S. only).

Martial, Rashford and Greenwood have scored 62 goals between them this season, but there is a reason Solskjaer has not given up hope of signing Sancho, despite what Borussia Dortmund sporting director Michael Zorc had to say about the transfer saga on Monday.

It wasn’t until the start the extra time that Solskjaer decided to make an attacking substitution, finally bringing on Juan Mata for Greenwood. The Spaniard is a fringe player these days, but for 30 minutes he showed just how good he still is. With his teammates looking more and more tired, his passing and movement elevated Solskjaer’s team.

It was Mata who finally unlocked the Copenhagen defence, sliding a pass through to Martial. His shot was saved by Karl-Johan Johnsson — who impressed throughout in making 13 saves — but in the aftermath, the Frenchman was bundled over by Andreas Bjelland. Referee Clement Turpin awarded United their 21st penalty of the season, and Fernandes stepped up to score. He doesn’t miss from the spot — or at least he hasn’t in a top-flight game for 4½ years.

It was enough to hand United a third semifinal of the season, equalling a feat achieved by Sir Alex Ferguson in 2008-09.

Wolves and Sevilla meet in Duisburg on Tuesday to decide who will face United in the last four, a game Solskjaer will have to watch on TV because of restrictions inside the stadiums.

“They are two good teams,” Solskjaer said. “We know everything about Wolverhampton. I had a game against Sevilla with Molde, so I’ve got something to get back against them, as well.”