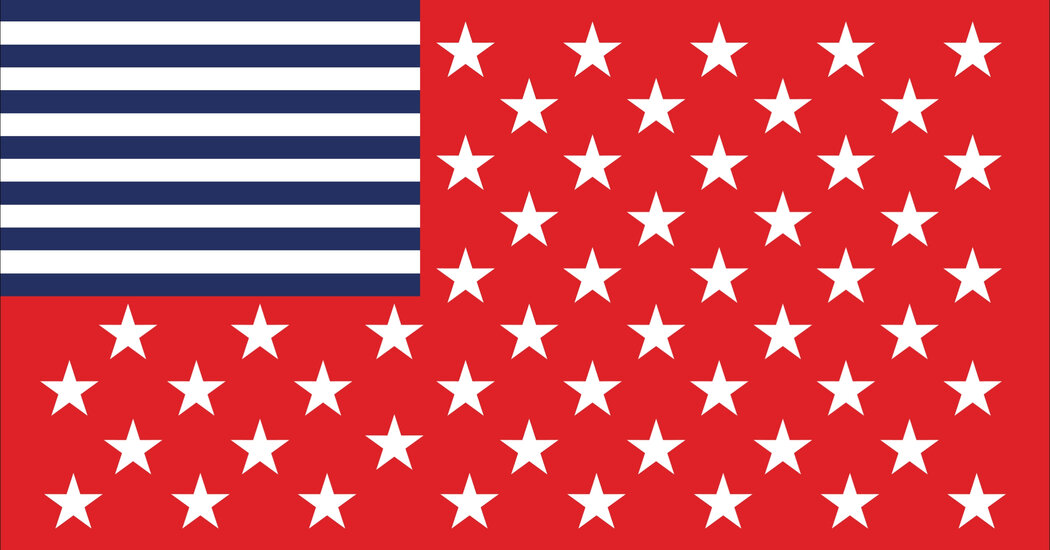 The American flag is a potent piece of national iconography, but its design shifted frequently until the early 1900s. What if it were redesigned today? We asked artists and graphic designers to try. The flags they came up with reflect a mix of approaches. Some are functional designs, others artistic renderings; some represent America as it could be, others how the artist sees the country now.

Andrew Kuo I’ve designed a flag that acknowledges the emotions that informed where our country has been and the spirit of where it may go, with joy and forgiveness as possibilities. We can’t ignore how we got here, but maybe we can move toward a different, even better place.

Natasha Jen, Michelle Ando and Veronica Höglund, Pentagram Design As graphic designers, our impulse is to work with graphics and see how small moves can make a big change. We decided to work with the existing elements: the stars and stripes. This flag is intended to suggest interdependency and togetherness. The two elements are interwoven to create a “fabric.” Interweaving suggests that we depend on one another and that as a whole, America is a fabric, held together by equality.

2×4 For nearly 250 years, the American flag has been made and remade, evolving from a unifying emblem into a complex and contested vocabulary of symbols. In this flag, the familiar symbolism falls out of focus, giving way to something ambiguous, vague and difficult to define.

Na Kim The colors of our flag are intended to stand for unity, valor and justice. The gray, monochrome flag represents America surrendering to its fall from power and loss of the ideals it once stood for. The American dream is being washed away.

Jiminie Ha and With Projects Inc. The flag in its current state is a static representation of the country today. I transformed the flag into an interactive, moving digital flag that mirrors our overall sentiment through the lens of the Declaration of Independence: life, liberty and pursuit of happiness. These values would be determined by relevant, collected data and would transform over a given period. The radiating shapes suggest the country’s growth or decline within these parameters.

Joseph Han, Tom Elia and J.A. Ginsburg, Collins The American flag was once a unifying symbol; its red, white and blue belonged to everyone. But now, red and blue are tribal signals, and the flag seems to represent two factions forced to share a piece of fabric. By running a single purple bar across the middle, this flag reminds all of us of the constant potential and possibility inherent in America when red and blue come together as one.