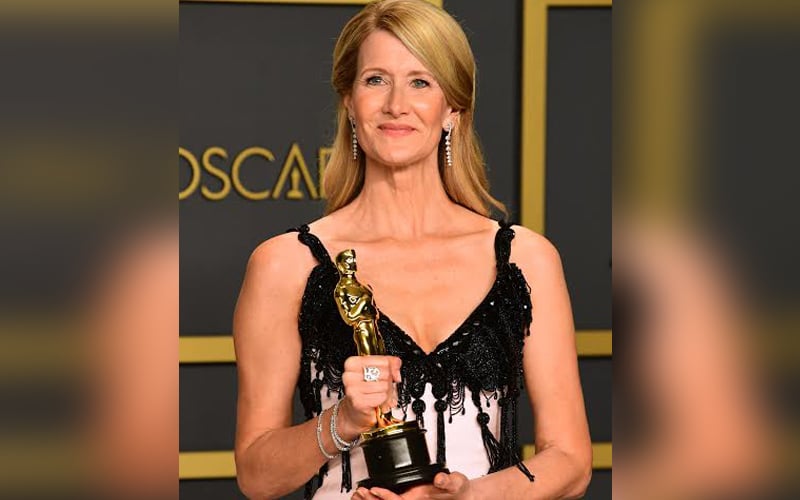 Laura Dern triumphed on Sunday in the best supporting actress category for her portrayal of a cutthroat divorce lawyer in ‘Marriage Story’. (AFP pic)

LOS ANGELES: This has certainly been a very good year for Laura Dern.

The 52-year-old has been enjoying a career revival of sorts, with a string of starring roles in critically acclaimed film and TV projects – and now she has claimed her first Oscar.

Dern triumphed on Sunday in the best supporting actress category for her portrayal of a cutthroat divorce lawyer in “Marriage Story,” on the heels of wins at the Golden Globes, Screen Actors Guild awards and the Baftas.

She also featured in another Oscar-nominated film this past year, “Little Women,” and is enjoying success on the small screen in the HBO hit series “Big Little Lies” as ambitious executive Renata.

But it is her work as Nora, the lawyer representing Scarlett Johansson’s Nicole in her divorce from Adam Driver’s Charlie in “Marriage Story,” that has turned into her crowning glory.

“Some say never meet your heroes, but I say, if you are really blessed, you get them as your parents. I share this with my acting heroes, my legends, Diane Ladd and Bruce Dern,” Dern told the audience, her mom looking on in tears.

The Academy Award, which comes on Dern’s third nomination, is quite a gift for the actress, who turns 53 on Monday.

“This is the best birthday present ever,” she said on stage.

Born into Hollywood royalty, the veteran actress began her career as a teenager in the 1980s and over three decades has played radically different roles.

She enrolled at the University of California, Los Angeles (UCLA), intending to study psychology and journalism, but she withdrew two days into the semester after being cast in David Lynch’s 1986 mystery-thriller “Blue Velvet.”

Her decision clearly paid off and the roles started coming in – she went on to reunite with Lynch for “Wild at Heart” (1990) and “Inland Empire” (2006).

She earned her first Oscar nomination in 1992 for her role as the titular character in “Rambling Rose,” in which she starred alongside her mother and played a love-hungry young woman.

Her second Oscar nomination came in 2015 for her role in “Wild,” based on writer Cheryl Strayed’s memoir, alongside Reese Witherspoon, one of her co-stars in “Big Little Lies.”

And while much of her work has been in independent cinema, Dern made a foray into the world of Hollywood blockbusters with “Jurassic Park” and “Star Wars: The Last Jedi.”

She has more than 50 films under her belt, and her television work is equally recognised – she has won an Emmy and a Golden Globe for “Big Little Lies,” and three other Globes for TV roles.

Dern, who spoke with AFP at a pre-Oscars event in Beverly Hills, said “Marriage Story” was a “deeply personal” story for her.

She said she could relate to the searing narrative, given her own divorce from musician Ben Harper – with whom she has two children – and her parents’ breakup when she was two years old.

“Or we’ve actually gone through divorce.”

Dern – who is a member of the Academy of Motion Picture Arts and Sciences’ board of governors – has been actively involved in the Time’s Up initiative founded by women in entertainment in the wake of the #MeToo movement.

The group aims to fight sexual harassment and assault in all industries.