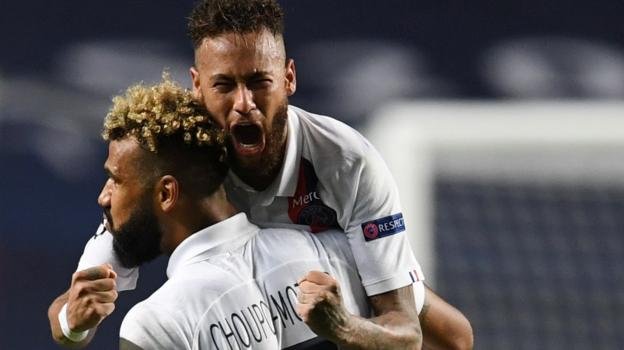 We have been here before but there is a feeling this could finally be Paris St-Germain’s year in the Champions League. So will it be?

The perennial French champions face RB Leipzig in the last four on Tuesday as they try to reach the final for the first time.

They were seconds away from going out to Atalanta on Wednesday but Marquinhos equalised in the 90th minute and former Stoke striker Eric Maxim Choupo-Moting scored the winner 149 seconds later.

The Champions League has been the missing piece of the puzzle since PSG’s big-money takeover by Qatar Sports Investments in 2011.

In eight full seasons under Qatari ownership, they have won 18 of the 24 domestic trophies – including seven Ligue 1 titles.

But this is the first time they have been to the Champions League semi-finals since 1994-95, long before the takeover.

They reached the quarter-finals in the first four years of Qatari ownership but seemed to regress by going out in the last 16 for the next three seasons.

Capitulations against Barcelona in 2017 and Manchester United last year will live long in the mind.

What has changed this time? Have PSG found a team spirit?

This year, instead of bottling the big moments, PSG have managed to show resilience.

They topped a group containing Real Madrid with five wins and a draw.

They then overcame a first-leg defeat to beat Borussia Dortmund in the last 16 pre-coronavirus break, before their comeback against Atalanta in the quarter-finals.

So what has changed?

“The team spirit we saw against Atalanta and in the second leg against Borussia Dortmund was not really there in previous years,” says French football journalist Julien Laurens.

“Boss Thomas Tuchel and his staff created a pact between them that this could be their year – you have to believe until the end and not feel that stress or pressure that you did before. The game against Atalanta showed that really well.”

Is this Neymar’s time?

Neymar has scored 70 goals in 83 games for PSG, including

PSG made Brazil forward Neymar the world’s most expensive signing when they paid Barcelona 222m euros (£200m) for him in 2017, a record that still stands.

That was largely in a bid to challenge for the Champions League, a competition Neymar won with Barca in 2014-15.

They also brought in France striker Kylian Mbappe for 180m euros (£165.7m), the second most costly signing of all time.

Neymar has been unfortunate in the Champions League and missed the game in which they were eliminated in his first two seasons with a foot injury.

However, he has managed to stay injury free at the right moments during 2019-20 – even though he has had three spells out – and fitness should not be an issue after Ligue 1 was curtailed.

The 28-year-old was impressive in their victory over Atalanta, taking the lead in driving the team during the first half and then having a hand in both their goals.

“Neymar showed why he is one of the best in the world,” adds Laurens. “He wasted chances but the way he played and the way he took the game on and owned the game was incredible.”

One more hurdle to overcome

PSG could probably not have hoped for a more favourable Champions League semi-final (on paper anyway) than RB Leipzig.

The German team were only formed 11 years ago and had only won two matches in Europe’s elite club competition before this season.

They have also lost their all-time top scorer, Timo Werner, to Chelsea.

However, they did see off Atletico Madrid – conquerors of holders Liverpool and twice finalists under manager Diego Simeone – in the quarter-finals.

Laurens says: “In Paris they are very cautious of this Leipzig team and they know PSG can only go through if Neymar and Mbappe have the same type of performance they had against Atalanta.”

Bayern Munich or Lyon await the winner in the final. Will PSG be there? We shall find out soon enough.