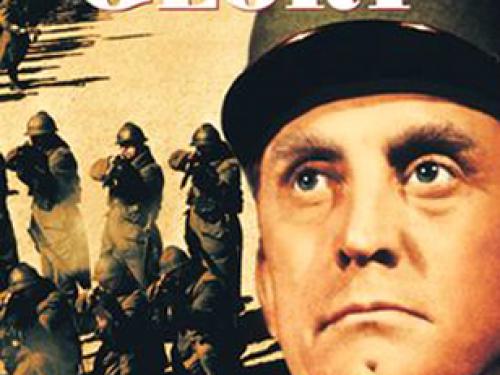 A Cold War era treatment of an earlier conflict, Paths of Glory engages injustice within the ranks during World War I through the efforts of a regimental commander in the French army, played by Kirk Douglas, to stem callous treatment of line troops by the French high command. Built upon class divisions, the film depicts an entrenched establishment that cannot be challenged no matter how irrational or heartless the orders from above.

Stanley Kubrick was just 28 years old when he made Paths of Glory, only his fourth feature film and his first critical success. The movie was based on a 1935 novel by Humphrey Cobb, which was adapted for the stage in the same year by a WWI veteran named Sidney Howard. The play was a flop on Broadway because audiences found its harsh anti-war scenes disturbing. Nevertheless, Sidney Howard continued to believe in the relevance of the story’s message and pushed for Hollywood to take up the “sacred obligation to make the picture,” as he put it. Kubrick remembered reading Cobb’s novel years earlier and purchased the film rights from Cobb’s widow for $10,000. Sidney Howard’s “sacred obligation” was now to be fulfilled.

Premiering in 1957, the film was just a modest popular success, but it

earned Kubrick much critical acclaim and was the start of his reputation as one of Hollywood’s most talented and significant directors of all time. Kubrick went on to direct such classics as Spartacus, Dr. Strangelove, 2001: A Space Odyssey, A Clockwork Orange, and Full Metal Jacket.

The film title, Paths of Glory, is something of misnomer, as Kubrick reveals a most inglorious reality to the irrationality and horrific loss of life in WWI. With powerful performances paired with battle scenes of gritty realism, Paths of Glory shows the fight was not always just with the enemy.

Paths of Glory will be shown at the National Air and Space Museum in Washington, DC, and at the Steven F. Udvar-Hazy Center in Chantilly, Virginia, on Friday, July 14, 2017 at 7:00 pm. Request free tickets for the screenings. Hollywood Goes to War: World War I on the Big Screen is a year-long film series showing Hollywood’s finest feature films on World War I, and is part of the National Air and Space Museum’s observance of the hundredth anniversary of the First World War.

Before the screening in Washington, DC, join us for short talk about military equipment used by soldiers in WWI, with a display of actual WWI artifacts, beginning at 6:30 pm at the Museum’s Welcome Desk.

Glory to God — Across the Land the Story is Told